One Hot, One Cold 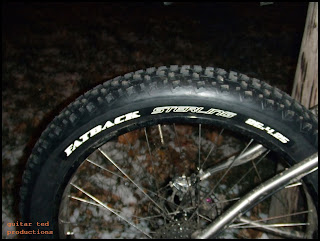 So, if you haven't noticed on their site, the Triple D is on again and I signed up once again.  That means I have already been digging into just what it is I am going to do this year. obviously, the bike will be the ol' titanium Mukluk. The Snow Dog is stripped and hanging, so it can't be a choice now. (But that may change soon. We'll see.....)

Anywho.... I have been experimenting more with the Fatback Sterling tires. Now with the weekend's snow and really cold temperatures, I can get a read on what the snow performance might be like with these tires. It was a balmy 1°F yesterday morning with a bitterly cold windchill, some fresh snow, and a bright, clear sky. Perfect!

I ran the Sterlings at about 20psi and keep in mind- that was indoors psi. Outside it was slightly less due to the cold air. I was pleased with the traction. That was far better than the Larrys from a snow standpoint. I was running through some loose, unpacked snow and some heavily packed snow. In both situations I found the tires felt stable and had decent grip. The surprise was how fast they were once you got on some deeper snow. The feeling was night and day versus running on hard pack snow or pavement.

Coming home I dumped the pressure to 15 psi, (again- set indoors), and the grip level was higher with better float. Probably equivalent to what my Larrys were like at 5-6psi. At the 15psi setting, (again, what they were at 2°F- the temperature coming home- is going to be slightly less), the Sterlings had a bit more self-steer, but nothing unbearable. Rutted trail would have likely been an issue, but I didn't have that feature on the way home to know for certain.

Conclusion: This tire should work for Triple D. More soon....

Okay. A lot of folks are setting goals and making ride plans for 2014 already, so I wanted to talk about the GTDRI.  This is my hot, long, tough ride that I do every summer. I've got a plan, and I thought I'd put it out there for consideration.

So I want to do the same route we did back in '09-'10. A few of you know this route and know that it is a killer 118 mile ride with 10,000ft of elevation gain. There are many 12-15% grades, and it has stellar views. I don't think anyone will argue that this loop is worthy of GTDRI status. By the way, it's a loop that starts near West Union, Iowa and takes in the small villages of Elgin, Elkader, Garber, Strawberry Point, Volga, and Wadena.

Now here might be a controversial point. I am going to suggest that the ride take place July 19th. Yes....that is the day before the start of RAGBRAI. You know what? do not care about that. Folks in the past said it mattered to them, but from what I have seen over the last few years, the folks showing up to this ride are not saying they are doing RAGBRAI, so I am not making any considerations for that. If I hear and read a hue and cry to change my date, I will seriously consider it, but I bet that I do not. So......it's pretty sure at this point that it will be the 19th.

The first time we did this loop, (during The Summer That Wasn't A Summer),  it took all day to complete this brutal beast of a ride. The last time I attempted it, I succumbed to the heat and only got in 80 miles. I want to go back and get this done and overcome the heat monster, if I can.

That's enough to think about for now!
Posted by Guitar Ted at 1:30 AM

@Tyler Loewens: There is no sign up, no fee, nor any "official" thing about the ride. You show up if you want to and join in the fun. It is a "no rider left behind" group ride. That said- be prepared to suffer. The route is a killer! Stay tuned for more details....