Yep........another boring year end retrospective! Oh well......that's the time of year it is and what I have done most of the years I have been blogging, so there! This will be a bit different in that I am going to just talk about major things I was excited about throughout the year.

I'm not even going to put these into any sort of logical order either. Random......right off the "read only memory" that sits between my ears! Okay, so here we go....

Odin's Revenge: This is an event I think about every single day since I have returned from it in June. Really! I have a Sun burned line across my right thigh that reminds me of this event! It's inescapable.

But even without that mark, I would rank this as one of the major events of 2013 for me. It was a big trip for me to do something I was not totally prepared for, mostly because I didn't know what I was getting into. The hills and heat out there rival anything I've ridden, and the scenery is so spectacular and unusual that I am salivating at the chance to go back once again. But that is not the only reason I am interested in this event. The people that put it on have their heads screwed on straight, know what they are doing, and put on an event with that elusive "feel" that I miss in some other events that have gone mainstream or big time. Odin's may go down that same path at some point, but I sure hope that they don't.


I like being "out there", and while some events really make you feel tiny, insignificant, and alone, Odin's has a remoteness that rivals the Dirty Kanza, and probably any other gravel event in the middle of the U.S.A. It's also probably harder than anything I've attempted as well. There are no convenience stores, no towns, and hardly any signs of civilization. If it weren't for the stocked checkpoints that the Odin's folk set up and man, you would be hard pressed to ride the course without dragging a metric ton of supplies along with you. Again- a testament to the fine organization behind this event.

I'll be going back for another attempt. This coming year Odin's organzers are hinting at an entirely new course with roads they claim are even more spectacular than what we saw this year. I can not wait! I hope also that I can share this experience once again with my good friend, MG.

3GR: The every Saturday ride that I host out on the gravel roads around here made it through a second season. 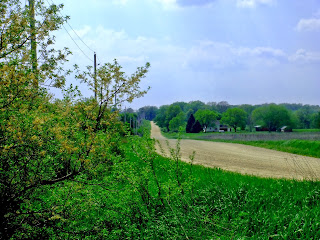 This past season we ran the route out of Waterloo due to springtime and early Summer high water issues in Cedar Falls and the route out of town Northward that the flooding affected. . It worked out brilliantly, if I may say so. I thought we may miss my coffee stop at Cup of Joe's, but we found a better replacement in downtown Waterloo in the Cottonwood Canyon Coffee shop.

There were some new faces and surprises on the ride, and we broke the one time attendance record for this ride as well. There was a good ride every weekend for several months and I really miss those rides now that winter has come and I have shut them down for a bit. Never fear though. Next year I plan on doing this again for a third season.

Triple D: I finished my second Triple D winter bike event. It was 65 miles of (mostly) brutal ice conditions. I was super stoked to have walked through the door of that motel that day at the end of it all. The icy conditions caused me to take only one dive, but it was fortunately only a slight delay, and there was no injury or damage done. I beat my previous time by a little, and had a lot of fun.

This is another event that is run by some really sharp folks and has that "special something" feel that I happen to like. In the two years I have done it the conditions have varied wildly, the venue changed,  and the courses were slightly different, but none of that affected the vibe of the event at all. Kudos to the Triple D organizers for a great experience. As many of you know, I am planning on going back a third time again. 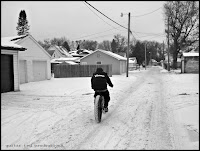 A Fat Bike For Jacob: Speaking of fat bikes, the day I decided to get my son a fat bike was a good day. That decision has turned out to be one of the better ones I have made in awhile!

While he had fun on his old mountain bike, the skinnier tires kept him from going places I could easily ride and he was getting frustrated. This wasn't a good sign for keeping him engaged in cycling. So, the fat bike has definitely solved the problems he was having with cycling, and he is now having a lot of fun on this rig.

It put The Snow Dog out of commission for a while, but it was well worth doing that for my son and the rides we've been getting in have been proof of that. Don't worry about the Snow Dog though! Plans are already in place to start bringing it back to life soon.

Thanks Brother... Odin's was a special event, no doubt, and it was made a lot more fun by hooking up with you as my partner in crime.

We aren't just gonna be doing Odin's together in 2914. I will be making a run at my first Triple D finish. Should be quite an adventure!

That would be so rad if we were still cycling when we were 950 years old! We'd be like.....the freakin' wizards of cycling from Middle Earth or something! HA!

Have a Great Day my Brother!