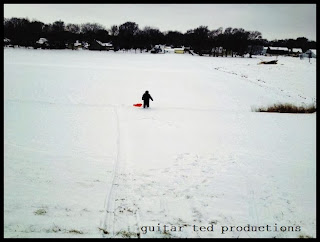 Ringing in the New Year has a bit of a different meaning these days. When I was a youginz, the folks would either get someone to watch us, or when we were old enough, would just leave us at home while they went out to celebrate the New Year coming in. Stories of drunken antics, late night shenanigans, or crashes, arrests, and death were not uncommon back then.

This has all changed, and probably for the better. In the family I am a part of, we spend the evening together, watching movies, eating snacks, and we all raise a toast at midnight before turning in for the night. My two children really look forward to this now, and I am afraid it has become the tradition for us through the years. Not that it is a "bad" thing, because it isn't, but it does affect the next day!

I wasn't too eager to get up, and I missed the planned ride some folks were doing on fat bikes in town, but had I went to bed earlier, I would have really disappointed the family. I went out and found it had snowed again, so I cleared the walk and around the cars. Then my son reminded me I had promised him a sledding outing. As it was his last day off from school for break, I decided against doing a ride at all and went out sliding with him. Time well spent.......

I could have groused, gotten angry, or sullen, and made myself no fun to hang out with, but ya know- not everything turns out as we expect, but if you let it, things may turn out even better than you imagined.

There will be times for bike rides in the snow, but my son?  He won't be here to go sledding with someday.....
Posted by Guitar Ted at 1:30 AM

Wise, wise conclusion you have reached. You will never regret the time spent with your children as "missed bike riding time" but you sure might regret it the other way around.

Fun! Ya we missed ya on the ride but I would have rather gone sledding. It was a cold one and windy. There will always be other rides. This Sat perhaps.