We were told to line up behind Chad Quigley's truck to get ready to do the controlled roll out, but only Mike Johnson and I comply. Pretty soon, I give out a yell and call the guys over. (Sometimes you just have to be a tad aggressive!) Soon 33 guys and a gal by the name of Sarah Cooper are lined up rag-tag behind the Ford truck awaiting Chad's signal to roll out.

The sky was blushed with the redness of the storm that had passed over us during the night. It was generally agreed that we were in for some slop, but no one knew to what degree that might be. Obviously, to those in attendance, more than a few folks had bailed out on even coming to the start of this event due to the weather. Originally there had been 60 riders that had committed to show up. Kudos to all who toed the line for the long course and to all the short course riders who owned up to their commitments as well. A lot of work goes into putting on these events and when you "no-show" it doesn't sit well with these folks that have done a lot of work on your behalf. Nuff said........

Okay, so with a toot of the horn and a yell from the gathered riders and onlookers, the pack rolled out at a leisurely pace behind the truck. A mile or so in and we were turned loose onto the saturated gravel for our long, 170 mile course.

The opening miles of Odin's Revenge are benign enough. A false flat for several miles until you get to the gradual grade up which leads you onto a meandering path into the maze of hills. This flat area is the flood plain of the Platte River valley, and it is wide enough that folks that never venture off the interstate highway, which runs its course along the Platte, never get to experience the beauty and breathtaking views of the hill country of Nebraska. Yes, I just used "hills" and "Nebraska" in the same sentence without mentioning "boring". Like I said, unless you've been out there, you'd never know.

I liken the area's look to those old Western TV movie scenes you may be familiar with. Rolling hills, small canyons, scrub trees, and bovines a-plenty. It really is like this out there to this day! Well, back to the event here........

The first order of business for me was to find the fastest line and to keep my drivetrain from getting fouled up. Within the first mile or two, I just pulled over to the center to let the "jackrabbits" go ahead on the preferred left side of the road. It was a bit slower in the middle for the skinnier tires, but my 2.1"s were okay out here in the mush and I wasn't about to burn up my matches this soon into a 170 mile day. 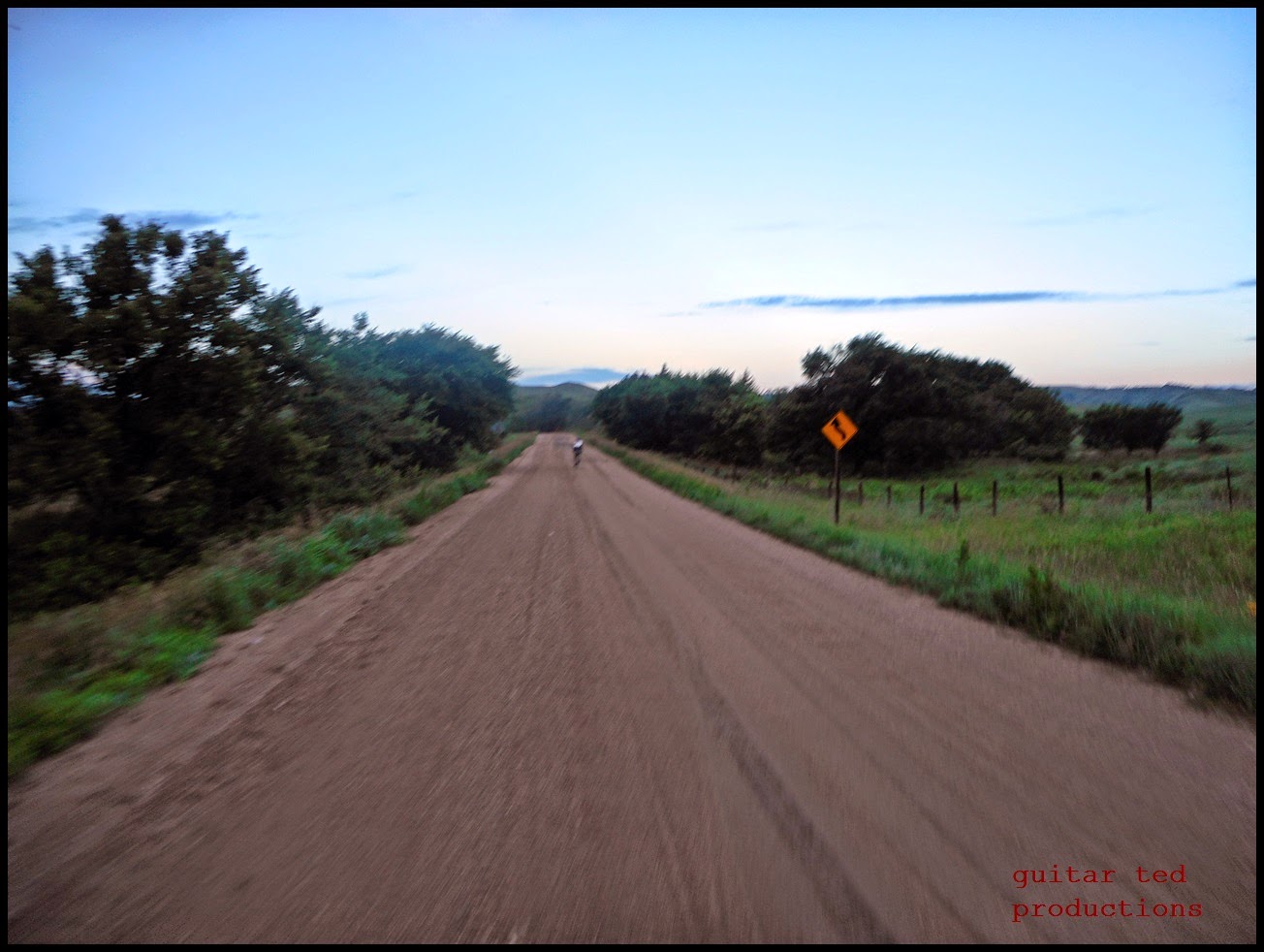 Several folks went zooming by and it wasn't long before I found myself back amongst the back-markers of the long course riders. I moved over to the left and settled into a pace behind a rider for a bit. Once I found my rhythm, I realized I was ready to go by him, and then I started to pick off riders one by one. All the riders that zoomed by me right out of the gate I caught and passed back. I was straining to see the good line in the mushy gravel. If I had to cross the darker, mud stained parts of the road, my drive train would start skipping and grinding so I learned early on to avoid these patches at all costs. I wasn't seven miles into this and I was already worried about nursing along a finicky drive train! It was all new earlier in the year, but if I strayed into the muddier stuff, it acted like a worn out, years old drive train. Yikes!

About this time I rode up alongside Dan Buettner, who has ridden in Trans Iowa a few times. I enjoyed Dan's company and was glad we had hooked up for a bit. We chatted and as we were riding along we came up on a rider on a cross bike, upside down, with the rear wheel out of the frame. A flat tire? No- it was a busted derailleur! The rider was chipper when we asked if he needed anything, and shouted back that he was single speeding it, and was going to be fine. That rider was Jeff Caldwell. I'll get back to him in another chapter of this story....

There was a spell then where the sky went all gray and the air was coolish, drippy, and everything seemed wet. The roads were really sopping wet here, and the gravel was difficult to travel on without a big effort. The roads, I didn't care for, but this is the kind of weather where I thrive. I felt great, and pretty soon Dan faded back and I found myself alone for a bit. I was hoping against hope this weather would hold out for a long time, but in my heart I knew this was a temporary reprieve from the impending Sun and hotter feeling air. I drank occasionally and just tried to enjoy as much of this as I could.

Dan would catch back up, but another rider came into view and it was Don Daly, who also has done Trans Iowa before. Don is really an upbeat, fun guy to ride with, and I was glad to have him as a riding companion off and on for most of my day after meeting up with him. (Thanks Don!) It's the folks in this event that were the most amazing thing to me about the weekend. Don was only one, but an excellent, example of this.

At about mile 15 we made a left turn onto our first "MMR", (Nebraskan DOT-ese for B Maintenance Road!), and it was a grassy two-track with a pebbly, hard base that rattled your eyeballs. The BodyFloat seat post I was running fairly erased these vibrations, which was nice, and my 2.1" 29"er tires mitigated even more of that rattling, so I thought this section was a blast. It didn't last long though, and the next thing I knew, I was traversing some really ugly, wet dirt road which was rutted out by rain run-off very badly. This would be the theme of most of the rest of the morning. I thought it was pretty bad, but I hadn't even seen the worst of it yet!

I am not the best writer, perhaps, but I don't think I am terrible either. That said, there is no way I can convey how tough and treacherous the dirt MMR's were out there that Saturday morning. I'll give it a shot though.....

I think, looking back on this, the two hardest things about these sections were the varying consistency of the mud and the ruts which varied from mildly annoying to downright Biblical in proportion.

The mud, most of the time, was sticky enough that it would collect on tires and frame, eventually clogging up things and causing more issues with drive train components. My case was  made better at times since I had wider tires and better traction, but depending on the mud, I also had wider, flatter tires that skittered across the greasy surface instead of cutting in like the pizza-cutter wheels did. I never really knew which mud I was on until it was too late. Sometimes the wheels would track just fine, sometimes stuff was flying up like I was driving a manure spreader, and other times it was like black grease and the tires were floating and skidding all over the place. Then there was the pure mire. That was when you came to a dead stop!

The ruts. Oh those ruts! My favorite instance of these was the place I believe Chad Quigley was warning us about at the rider's meeting. This was a spot where I and Don Daly were riding together. It was on a decline, the section was maybe 25 yards long. It was the middle of the dirt road, about two and a half to three feet wide, and on either side were four to five foot deep ruts about two and a half feet wide at the mouth and narrower as they went down into the earth. It may as well have been the Abyss! I looked dead ahead and traversed it without issue, but that was a bit unnerving. Other ruts would just knock you sideways and nearly send you down, or cause you to have to slow way down to cross them perpendicular to their fall line so you wouldn't crash or have to save yourself from crashing.

As the day wore on I noticed that there were less and less tracks ahead of me. I was remarking to Don Daly at one point that I thought maybe we were top ten! I found out later on that in fact, at that point we were. Many had dropped out, knocked out by the tough conditions and mechanicals. Soft gravel persisted as we passed into and out of a small village. Then as the Sun worked its magic I could tell things were beginning to improve. It was great to see, but by this time I had already stopped three times to clear out my bike from mud, and Don Daly and I were quite aware that a 4:00pm cut off time at Checkpoint #2 wasn't going to happen. We were totally okay with that prospect, since we were out for whatever we could get and considering the difficulties we were facing, we knew it wasn't that we weren't trying. Odin's Revenge wasn't going to let us pass, and that was just the way it was. We were taking what the course was giving us and our abilities were not going to win the day. It was still better than "mowing the lawn", as Don said several times along the way!

Tomorrow: The Madness Part 3
Posted by Guitar Ted at 1:30 AM

Great recap... Days like we had last Saturday are tough to consider fun on a repeated basis (drivetrain parts get expensive), but it was a gas to try to navigate those conditions quickly... It was waaaaaaaay better than mowing the yard!

The wheel suck mud was tough! Used a lot of wattage just pedaling. Walking the bike is pretty tough too! I didnt take enough water on that first leg. Was some of the prettiest scenery I have ever ridden through though!