The road I was on was called "Barbwire Road", and it was strewn with chunky, loose gravel. It was not easy to ride on this stuff, but the Fargo Gen I was cruising over this stuff better than any of my skinnier tire gravel bikes could. The new Teravail Sparwoods were pretty impressive out here as well. So, I was doing as well as I could hope for with my rig and with my current food and water situation. Now if we could turn the North wind down a notch or two!

I was pushing pretty hard going North now due to the very strong winds. At one point, I was climbing a hill when I heard a dog barking. There was a farm on my right, and I knew there was no way to avoid or to outrun any dog that may want to give chase. The barking was getting nearer, so I dismounted, put the bike between myself and the farm, and waited to see what I was up against.

There were actually four dogs, but three were of such ancient age and wisdom that they were letting the younger dog do all of the barking at this point. One, a thickly haired, yellowish dog of medium size was walking with a limp. It must have had a hip problem. Well, the younger dog was curious, slightly wary, but full of mischief, so it immediately bounded around my bike and started to jump up on me as if it wanted to play. Barking incessantly, this dog was full of energy. The other three let out an occasional bark as the fit took them, but were mostly content to sniff my bike and myself, probably hoping to get some of my food I had in my bags, which I am sure they were able to smell.

Well, this was odd, and I didn't know how long it might take till they lost their interest and let me pass. Then the owner called out. I find that as soon as that happens dogs tend to break into protection mode. Sure enough, the youngest dog went on the defensive. The other dogs went back into the yard. They knew the drill. After much cajoling of the younger dog by the owner, and an apology from her, I was free to continue Northward.

I finally reached the corner where I had promised to myself that I had to make a hard decision on whether to try to get to Eskridge, which was 19 more miles out, or to start making my way back toward Emporia. I had it on good authority that if I got to Eskridge I might get water at the gas station. I didn't have any other food or water options after that for many miles. Like about 20 plus miles. That would mean I would have to go a good 45 miles without a resupply of food and possibly water.

I had limited supplies of water on board the Fargo yet, but no where near 40 plus miles worth. I saw a route that would be about 23 miles to Americus and I knew that there was a Casey's General Store there. Okay, decision made. I would cut my stay in Wabaunsee County short and turn back South after a traverse Eastward through the Southwestern end of Wabaunsee County. But not before I went one more mile North. With the raging wind, that would be no easy task, so I sat there for a bit gathering energy to get going again.

The road was set with some long climbs to steep pitches up and over rollers. The cross wind was hard to navigate due to my full frame bag. Going downhill fast was a handful! By this time of the day my legs were getting tired and I was feeling the effort. Still, I was riding well and I felt great. I hit a steep downhill and then a creek with an immediate uphill that was so steep I almost had to resort to the granny gear. I was looking to make the crest, as there it got less steep, and when I did, something came into view that made me feel as though I should stop for a bit. Not because I needed to rest, but because there was something about this place. Something calling me to stop.......

A white building in good shape with a placard under the topmost window which said "Chalk Dist 3". I had no idea what this building was, but it was adjacent to a cemetery, up on a tall hill, and in the middle of nowhere. I later found out that this was a small village in the late 1800's, but what it was all about, I don't know and I certainly didn't know anything beyond what I was seeing when I was there that day. 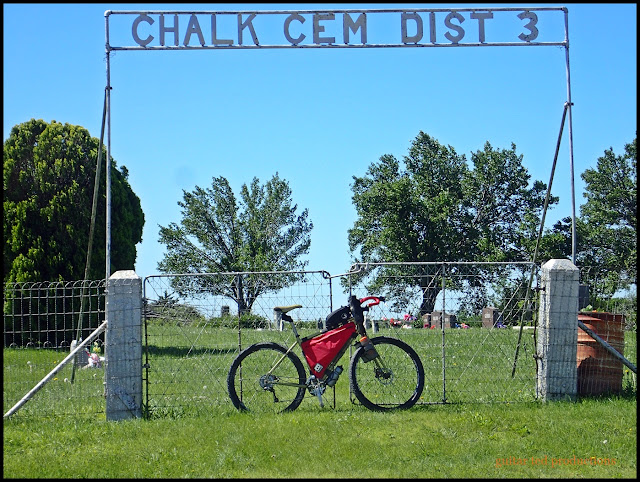 I sat down next to my bike along the wire cemetery fence. I wondered about this spot. As I glanced over my shoulder at the headstones, I wondered who these monuments represented. What were these people's hopes and dreams when they came here long ago? Why here? There was nothing to recommend the place to a settler. The land was not suitable for tilling, being so rocky. There were no manufacturing opportunities, no transportation hubs, and no cultural ties to this area. The white settlers had supplanted the Kanza tribe, and they in turn had come from the East years before. This land swallowed them all up. Now all that was left were place names honoring the Native Americans and these headstones. The land had beaten them back. Turned them back to dust.

The Earth of this place was calling faintly. I felt it. I could just close my eyes and release, but not today. This wasn't my time nor my place. I didn't belong there. I was just a wanderer. I needed to move on....... Suddenly all I heard was the rushing wind in the grass.

Next: Sailing To Americus
Posted by Guitar Ted at 1:30 AM

You had to decide on turns based on potential water availability at stores... you mention this a lot on your ride reports actually. I'm from Canada, so maybe it's a different situation, but do you ever stop at people's houses for water? I sometimes do, and never have a problem. Is that something you have an "unwritten rule" about? BTW, your unwritten rule about never turning back was written down the other day...

@Nick Pankhurst: On asking for water from farmers, etc: Well, in this area, you cannot count on that. Farm houses were few and far between. I had thought about it, but I didn't want to count on that option. In light of that, I limited myself to convenience store resupply.

I noticed on the DK route that the minimal maintenance roads "enter at your own risk" were in much better shape than the maintained ones!

@youcancallmeAl: Purportedly some of the best grass land for finishing beef cattle in the world.