The Kanza Ride: From One Extreme To Another

Friday. Four in the morning. The alarm on Tony's phone rings, but we were probably both ready for it. That's how it goes when you are anticipating a big ride. Up until this point, our days had been spent with the same purposes. However; today Tony and I would separate. Our intentions would be entirely different. One would be looking down the mouth of a 200 mile dragon of a ride. The other of us would be looking for the next turn, not knowing exactly where, how far, or even if the ride would end at a certain point.

One of us had their plot laid out plainly for them. The other would not know what the ride would be until it was over. Nothing wrong with doing it either way. Both ways have their merits and shortcomings. I was ready to find out what I could about riding into the land of the Kanza on my own, under my own power, relying on my own wits and provisions.

We got up, went to have some breakfast, and then got outfitted for our rides. Had I had a number plate, you wouldn't have known that I was not doing the Dirty Kanza 200. Maybe you might have thought my full frame bag was overkill, but other than that clue, I looked like any other guy or gal getting ready for the big 200. I rolled downtown with Tony and we looked for familiar faces. I saw Luke, the third place finisher from Trans Iowa this year, and I saw Warren. He finally bagged his Trans Iowa finish this year. I wished Tony all the best, and then I turned around, rode back up Commercial Street in the opposite direction from the way the 200 was leaving town, and a few minutes before 6am, I was on my way.

The weather had brought us a cool front, but not before dumping rain on the area just an hour or so ahead of the riders. I knew there would be a big Northerly wind on this day, despite there being a complete calm at the start. I was going North at first anyway, but I had thought I might veer to the West a bit as well, to take advantage of any Northwesterly wind there may be. So, I started with a vague idea of how to get out of town, and a goal of going through Americus, Kansas to start out with.

The juxtaposition of the anticipation and tense atmosphere of the beginning of the Dirty Kanza 200 and where I found myself on the North side of Emporia was extreme. On one side of town all hell was breaking loose on the first stretch of gravel, which was inundated by the recently passed thunderstorm. I heard later that 150 mechanicals ended 150 riders attempts within the first six miles. On the the other side of town, a peaceful sunrise over waving fields of grain highlighted by a light fog were entertaining a lone rider with nothing pressing to do for the rest of the day but to have an enjoyable ride.

Jim Cummings, one of the founders of the Dirty Kanza 200, described the area North of Emporia to me as "empty miles". Taken in context of his task of putting on a challenging event, such as the Dirty Kanza, I can certainly understand his viewpoint. However; that doesn't at all mean that cyclists shouldn't be riding out there. There was a beauty and peacefulness that was thick and enjoyable. Non-racing types would totally get into it. The riding is easy, and the scenery is really quite good. 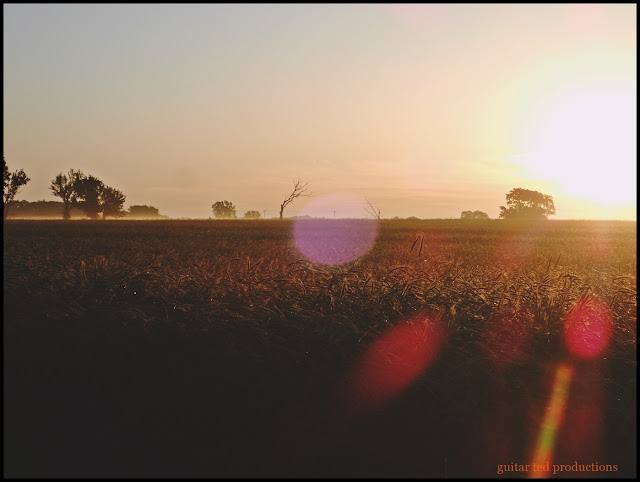 My route maps were taken straight off the Kansas Department of Transportation site. I enlarged the particular parts of each county I was interested in and printed them off on paper. Yes.....paper maps. You should all know how to use them. Anyway.....

Once you commit to using a map, you have to use your brain to find your way, and maybe that hurts too much for most folks. I don't know, but being prompted by a beep to look for your next turn is giving away something of your own power that I feel is not a good thing to make a practice of. It's kind of a "use it or lose it" deal. So, I was navigating by map, and I had to do it with a lot of thought and care. I didn't even have the road names, despite there being signs on every corner, just like we have in Iowa. I had to count miles and pay attention. My choice. Your choice may vary, and that's okay.

So it was that I was day dreaming or something and missed a corner which put me on a course to miss Americus. Dang it! Oh well, how about we just readjust our goals and try something different? That's the beauty of a ride with no hard parameters. You can adjust expectations on the fly.

I was following a course Northward that paralleled, for the most part, Allen Creek. I saw several white tailed deer bounding in fields and across roads. I spied a coyote up the road that quickly darted into the cover of tall grass that lined the road ahead. A big Red Tailed Hawk sailed off a utility pole as I came near it. I hadn't gone 15 miles and I had seen all of this and a beautiful countryside. This was a good start!

As I stopped to make a tortoise a little safer as it sunned itself in the light of a fantastic day, I wondered how things were going for Tony and the others in the race. I figured that they were well on their way to Checkpoint #1 by that time, and that they were still expectant and hopeful of a finish. It was a glorious day, with a light breeze, and copious sunshine. I was on my way to Council Grove, with maybe a resupply stop to extend my range, and new goals might be possible. However; I had my immediate route to consider, and turns I shouldn't miss, so I had to be vigilant. Yet, despite that, I allowed that I could stop and photograph anything I wanted to, rest when I needed it, and take my sweet time.

Next: To The Land Of The Dawn Of Day
Posted by Guitar Ted at 1:30 AM

Nice! Nothing quite like striking out on your own, with a map, a few provisions and a little gumption.