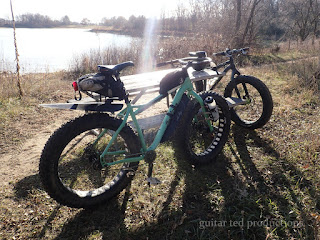 Sunday I got called in on guitar duty at church at the last minute, so the morning was spent strumming six string and all that goes with that. The afternoon was supposed to be glorious, so I convinced my son, Jacob, that he needed to test that new Race Face green anodized chain ring I recently put on his bike.

He agreed to go as long as we were going to ride to, "the lake, which is what we call that pond out off Martin Road and Highway 63. I think it is Myer's Lake, but I never call it that! It was a good choice because that is where he broke his chain ring on his last ride. Get back on that horse and all that. So, we went out to go around "the lake" and back home again. Not a big ride, but it was something.

I had to stop to switch to "low range" to climb the dike and then we headed off down the single track towards the lake. Jacob biffed after cleaning a rough section since the run out was a hard right turn. I convinced him that his bike would just roll right through if he would just trust it. He was a bit hesitant, but he did let it roll. I think he was so surprised his bike took care of him he forgot to turn until it was too late. No harm- no foul. He'll get it next time.

We made it to the water and Jacob insisted we stop so he could take in the view. I certainly wasn't going to stand in the way of doing that, so we chose a spot and he contemplated nature for a bit, until he spotted the sticks. There is something about boys and sticks that is like white on rice. I have witnessed so many youngsters of the male persuasion picking up sticks and tossing them, using them to beat on whatever, or using them as makeshift swords. It's uncanny. I don't remember being fascinated by wooden sticks in quite the same way, but my Dad often made me clean up our yard after windstorms of every branch and twig that fell, so maybe that is where I lost my love of sticks.

I made a deal with my son. I get to ride some of the exposed shore line/lake bed and he could go on up ahead on the regular trail and take some pictures of me. He obliged, so I went down to the water's edge and crawled along in the soft bed of the lake, now exposed due to the dry conditions here most of the latter half of the year.

There were lots of sunken in foot prints down along the water, but nary a fat bike tread pattern to be found. I find it uncanny. If you have a fat bike and live in this area, why wouldn't you ride it down here? I saw two guys on our way to the lake on the single track using fat bikes. They weren't going anywhere a cross bike couldn't go.

They were doing it wrong.

I mean, if you do not use your fat bike to ride where you cannot ride other bicycles, then you are missing the point entirely. This is what fat bikes were made to do. I tried convincing my son he needed to do this, but he isn't quite there yet.

We need to get you down here some point for a loop around Saylorville when the water is low enough. A lap of the upper portion of the lake and the two associated bridge crossings takes about 3 hours. Plenty of sand, shoreline and fun to be had.

Would be nice to see pictures of your son as we follow his bike life. Or even the other folks that you occasionally ride with.
John