Hanging out in a non-descript municipal park's parking lot, looking rather suspiciously drunk since your head is bobbing, heavy with sleep, is generally a recipe for a tap on the window from a local law enforcement person. This was just par for the course at any given Trans Iowa finish line for me. I wasn't alone though. I had good company. MG was next to me in his Subie and Sonya, waiting on Luke's imminent arrival, was to my left. Still, it probably looked rather suspicious to the casual observer.

As the day dawned we got more solid information on Luke's arrival time. I thought originally he might be there between six and seven o'clock in the morning, but the final miles must have been brutal. I know it was very cold. I know it was very hilly! Then we pushed back that timing until after seven. But in the end he arrived at ten minutes to nine!

I guess I shouldn't have been surprised. This was, by far, the longest Trans Iowa ever. Most riders completing the course clocked in nearly 350 miles before they finished. A few "bonus miles" weren't uncommon due to navigational errors. Add in the fresh gravel covering, in my estimation, 80% of the course, the wind, the extreme cold, and you have a Trans Iowa that ranks right up there with the toughest ever.

In the meantime, after Luke's arrival, I tried to tally up who was in and who was out. There were several people still struggling to make it through to the end. When Luke finished I think we were still in the high twenties for rider numbers. But the kicker was that as the Sun rose up in the Eastern sky, so did the wind speeds. The course featured a long, Eastward push to nearly the end, and the wind was contrary here. Riders coming in later would face nearly 20mph headwinds while Luke faced a mere breeze.

Probably the biggest surprise was that Mark Johnson pulled off a second place overall and first place SS/Fixed gear class win after not being on the radar up front nearly the entire event. But Mark somehow finds himself in the top ten at Trans Iowa no matter what if it is even possible to finish.

Last year he was the only single speeder to finish and that in horrendous conditions. This guy is tough as nails and a great cyclist.

I was also impressed with Mathew Kutilek's third place overall. Many may not realize this man has a back story which would make you drop your jaw in amazement. Basically, he was wounded severely as a Marine and probably should have died, or at least lost one of his legs. But somehow here he is pedaling to a well deserved third place Trans Iowa finish. He was cold, shivering, and spent as he finished. He said later that it was only the second time he has been this close to Death. Hyperbole? Maybe. You'll have to ask Mathew. At any rate, I couldn't be prouder or more honored to have had him in the event.

Finally, in a storybook way, Janna Vavra finished in first place in the Women's Open category. But that doesn't tell the story here. She was the very first female to ever finish a Trans Iowa, one of only five females to ever complete a Trans Iowa, and the only woman finisher out of 21 women that started Trans Iowa v14. All that through a nagging knee issue which she pushed through to get her finish. For this, she was granted the "Grittiest Ride" which comes with the prize of a Black Mountain Cycles frame and fork of her choice. Again.....wow! I couldn't be happier about how this turned out. Definitely a super cool way to cap off the last Trans Iowa ever.

The finish line scene got a little hectic there for a bit with pairs of riders coming in within a half an hour or less of each other for about an hour and a half. But then it dwindled to a trickle. Janna finished at 12:50, then Jason Shearer came in twelve minutes later and Ben Mullin pulled in fifteen minutes after that. This would conclude the finishline welcoming for me. 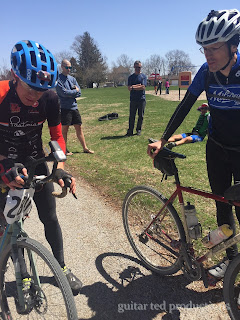 I noted that people were hanging out in the Sun, lounging in the grass, and generally enjoying the unfolding scene. It took me back to T.I.v3 when the scene was similar. I remembered that day and the joy I felt in just watching so many finishers and support people filled with joy at the end of a long, grueling event. It was something pretty special then, and it still was in 2018. Craig Cooper, of Bikes To You, looked at me and smiled. He said, "You've really created something special here." Man.....that was hard to hear, in a way, knowing this was it.

Will Ritchie showed up with a box of coffee. I never saw such a thing in my life, but man! Was that a lifesaver! Will's offering of coffee woke me right up and kept the batteries charged enough that I was alert and attentive right up to the bitter end. Jess Rundlett, whose Tweet I quoted at the Pre-Race, was also hanging out there along with Scott Sumpter, whose attempt at a fat bike finish wasn't successful.

I chatted with Will for quite some time, but eventually 2:00pm came around and it was time to get out of there. I noted that I hadn't seen one drop of alcohol consumed at the finish line. How strange was that?! Since that was the case, I purposed to raise a toast with a can of Dale's Pale Ale in my truck. That done, I fired up the "Truck With No Name" and slowly rolled out of Miller Park.

I guess I didn't really know what to expect at this moment. Would I be relieved? Would I be sad and cry? I didn't know. But oddly enough, I just drove away like it was the end of any other Trans Iowa I've ever done.

And maybe that's the best way it could have been.

That's the end of my last Trans Iowa report ever. I will have some closing thoughts in tomorrow's post. Thank you for indulging me this opportunity to tell the story.
Posted by Guitar Ted at 1:30 AM

Excellent summary of the race GT -- so interesting to hear it from a perspective other than riding TI. What you created with TI will live on notwithstanding we won't be riding it again. Thank you!