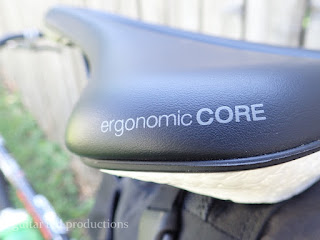 The Ergon ST Core Saddle continues to get use on my Surly 1X1 fixed gear commuter and I figured it was time to give an update on how things have been going with it so far. I got this saddle in February and started riding it before the month was out so I have a solid two and a half month's worth of riding on it now. (See the first part of this review HERE)

The conditions have ranged from sub-freezing, snow, rain, and have now included temperatures as high as 80°F and lots of Sun. Basically everything you can throw at a saddle for conditions, this saddle has seen it. My commute also takes in several potentially muddy sections, LOTS of busted up pavement, curb hops, and even a grassy field.

First off, the saddle has come through remarkably well in terms of its condition. It looks as new, save for a few wrinkles in the cover where the nose of the saddle flows back to the sit bone area. I have an image below showing this. It is a minor thing and it points out something I will detail further into this article.

Secondly, I think it is pertinent to remember that the bicycle I have the ST Core saddle mounted to is a fixed gear bike. The dynamic forces on the saddle are quite different than if I had a freewheel and it is my opinion the fixed gear riding puts more stress on the saddle. Since there is no coasting, the saddle sees pedaling forces 100% of the time I ride it as well.

Saddles are intensely personal. One saddle that your friend raves about may be your worst nightmare. So, I hesitate to say that the Ergon saddle here is "bad" or "good" in this regard. I can only relay to the reader what I like and what this saddle does or doesn't do to accommodate that. Then you have to think that over and come to your own conclusions.

In my case, the ST Core is a bit too much in the back half for my rear end. I compared it to saddles I like, (WTB Pure, SST, Brooks C-17, B-17) and it gets wider sooner in its length than those other saddles do. This may be why I find it hard to sit on the back end of this saddle and why it chafes me some where you see the wrinkles above.

I was forewarned that this is a saddle that is to be used in a more upright riding position, and I cannot think of a more upright seated bike than my 1X1. So, in terms of how I am using this saddle, I think I am well within the parameters as set out to me in the beginning. Fit issues aside, this saddle does have great attributes for those whose posteriors do fit the mold of the ST Core.

First off, the Core technology works. You will think you have a half inflated tire the first time you ride an ST Core saddle because it has a lot of give built into it. This smooths out the cracks and crevices in any road so well you hardly think about unweighting the saddle and standing on the pedals. This works on sharp hits and higher vibration inducing chatter as well as rocking in tune with your pedal stroke. It all adds up to comfort that isn't obtrusive or that messes with your cadence much at all. I only noticed excessive bounciness when I out ran my fixed gear and was spinning wildly. That said, even then the ST Core absorbed a lot of that self-induced bobbing.

I think it is also noteworthy that I used this saddle almost exclusively with street clothing. I wore my usual denim jeans, Dickies, and shorts when it got warmer. In fact, I don't think I ever put a chamois to this saddle once. So, besides the minor fitting issues I had, I believe this saddle would be the bees knees for a commuter, city biker, or recreational cyclist with an upright positioned bike and a penchant for a broader saddle. The channel in the saddle wasn't noticed at all while riding, so I guess it worked. I never went numb, just for the record!

Conclusions: The Ergon technology used in the ST Core is impressive. It works when it is cold and when it is hot. It works in rain and in snow. After almost three months of hard use it shows hardly a wrinkle. The ride you get from this saddle is definitely smoother than it would be without it and using another saddle. You can think of it as sprung, but not bouncy. The material used to absorb vibrations seems damped to a slight degree. Well enough that bouncing out of the saddle is rare and only happens on sudden, jarring hits that would send you flying using a typical saddle.

Such a great saddle but.......sigh! That fit...... It just doesn't quite fit the ol' Guitar Ted rear undercarriage. I would love to see a pared down. sleeker, "bucket style", maybe less foam-infused version for my gravel bike. I think a performance oriented saddle of this nature would be a great idea.

However; if you have an upright seated position on your bike and you gravitate to a wider saddle profile, this may be for you. MSRP: $149.99

Note: Ergon USA  sent over the Ergon ST Core saddle at no charge for testing and I was not paid nor bribed for this review.
Posted by Guitar Ted at 1:30 AM

Are you able to compare / contrast the shape/fit with something like a Brooks B17? That's basically the gold standard for me as far as saddle shape goes.