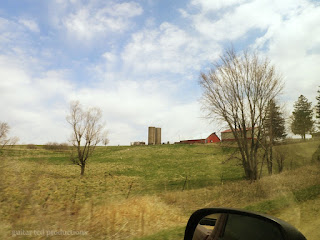 As I sit here well after the event has finished I have several thoughts. First, I think the event was a success, although some may point to the 120th thing and say that wasn't perfect. I get that some folks are not happy about it, but I have also heard from others who got it and made it work. In the end, it wasn't an easy set of cues to navigate, but then again, it wasn't meant to be "easy", was it?

And in the end, you can say that about the entire event. It looked as if it might be an easy year, but that was deceptive. It certainly was anything but easy and it turned out that it was very difficult. All the factors that make up a tough Trans Iowa were there with the exception of rain and mud. They weren't missed, by the way.

The event had 19 finishers. Probably about average for Trans Iowas. This was good. It certainly could have had more finishers, but circumstances must have kept more than a few from reaching the end. I noted several DNF's at CP#2 between 9:00pm and 10:pm, which, on the surface of it, seems odd. But that's just me looking in from the outside. What reality was, for each person, I cannot say.

So, in my view, the event was a success. Everyone was accounted for. The injured Kate Ankofski is back riding already. I was so happy to hear that she was not seriously injured. You all know how the specter of that possibility- that someone would get seriously injured- has haunted me. Keeping the news back that this was the last Trans Iowa was the right move. In fact, it was a difficult move. I've known this would be the last Trans Iowa for at least ten months! But saying anything ahead of time would have been bad. I feared that this knowledge would have had a detrimental effect on decision making, and after reading a few social media posts after the event, I think I was correct. So that was a success.

I have some other thoughts about the legacy of the event that I have timed for release tomorrow. You can read all about that there. However; all I wanted to share now was a bit of an anecdote. It has to do with the beginning and the end of this event.

The first two Trans Iowa's didn't really have any finish line activities. The first was a line shared with the Decorah Time Trials and due to my having to sit in Cresco till all the finishing riders went by, I was never there to see Ira Ryan finish. T.I.v2 was unfinishable, and so there was no finish line. Ironically, the first winner's hand shake went to the very same Ira Ryan that won T.I.v1.

Ira cursed me, as I shook his hand, and the difficult course. It was a bit of a surprise reaction, in my view, and I was taken aback. His entourage that wrapped him in a blanket and helped him away was unfriendly and looked at me with venomous eyes. Certainly, if I had that sort of reaction more often, well, that would have been it from my standpoint. Why sit around and be cursed and looked at with disdain, just to run a free event?

Obviously, the rest of that day at V3 went a lot better. And I had no other finish line interactions like that again. Fortunately, the Trans Iowa finish line hand shakes ended on an up-note. It was made all the better by the fact that Luke Wilson is an engaging, kind man who seems very genuinely happy to have been the winner of Trans Iowa. The others that finished that day were also very grateful. Even if there were concerns, as Mark Johnson had, there was still the genuine joy in finishing and thankful attitude toward myself and the volunteers. Janna Vavra was gracious and kind as she took the last Open Women's title. No maledictions given at this finish line this time!

In a way, the T.I.v3 thing was kind of a window on how the event had potential, but there were a lot of things that needed weeding out. The last Trans Iowa finish line was what it always was meant to be. Nothing needed taking away, nothing needed to be added. The winners reflected this as well. The rest of the finishers reflected this. It was beautiful outside, so even the weather was great. People were hanging out, laughing, talking.....

I was left after the event with much satisfaction. I don't think Trans Iowa could have ended, as a series of events, any better than it did.

Thanks: Volunteers- wow! You once again were the very best group of folks ever. I heard so many compliments on you folks. Unbelievable service and stellar performances you folks. Special shout out to Craig Groseth for being willing to take a vacation,come from South Dakota, and volunteer. Venues: The Grinnell Steakhouse for the 9th year of hosting the Pre-Race Meat-Up, Grinnell Chamber of Commerce, The City of Grinnell, Bikes To You/Craig Cooper, Sponsors- WTB, Pedal of Littleton, Josh Lederman/Lederman Bail Bonds, Bar Yak, RidingGravel.com, Guitar Ted Productions, Black Mountain Cycles, Andy's Mobile Bike Shop, Europa Cycle & Ski, Velo Press/Nick Legan. Imagery- George Keslin for Wally Kilburg Photography, Jon Duke, Celeste Mathias.  Special Thanks: Matt Gersib "MG"- My brother, thank you for being there with me. Tony McGrane and Mike Johnson- You two were indispensable. Always there for me. My wife Phyllis and my family- Long suffering and so understanding. I love you so much!

These post of the TI are tops! Thank you.

With all the great stories and rich history of the Trans Iowa races, have you ever thought about writing a book about the events? I think it would be something worth putting down on paper for future generations to read, maybe even include the thoughts of some of the winners, racers and volunteers.

Thank you Ted, not only for hosting TI, but also for spending many countless hours writing posts, posting pictures, and hosting podcasts so that everyone who didn't participate could still experience it in some small way!

@Rob E- Ya know, I never thought about a book. I had thought about doing a movie for the last TI, of course, that never happened. Hmm......

to Very nice to go out feeling good about your efforts. N
ow off to simpler more manageable events that you can just enjoy without losing any sleep.
John

I don't know anything about writing a book or getting one published but I am sure that there must be someone out there that would find value in the story of Trans Iowa, the racers, finishers and volunteers stories and in musings of Guitar Ted concerning the event. I'm not sure how many followers this blog has but I'd wager it's quite a number of folks, you probably wouldn't make the NY best sellers list (but really who needs that kind of fame) but I bet it'd sell enough to cover costs and maybe even put a few dollars in your pocket. Trans Iowa is such a rare event done in such a different way, it has a story to tell and a storyteller to tell it. Plus, now that you have all that free time... On a serious note though, I know nothing about book publishing but if you ever do decide to write it and I can help in any way let me know, even if it's just reading over a draft.

As one of many readers on the sidelines, just want to say thanks for making TI happen. It's never been something I wanted to try, but to know it's out there, and to have known some folks that have tried it (Keisuke, Dr. Giggles), it's become an Everest of sorts on the horizon: something massive and mysterious to dream about. Good on ya.