Bicycle saddles are one of the contact points for a rider and arguably the most important one. If you get on a bad-for-you saddle, then you won't be riding long, or at the very least, you will be in pain. Who wants to be in pain? (WAIT! Don't answer that! I don't want to know!)

Anyway, pain in the butt, (literally) saddles are no fun. I think we can all agree on that point. So, saddle technology has been something that has been changing a lot over the last 30 years. The segment has seen a ton of changes and it has made certain company's names and broken others. Ergon is one company that kind of hangs its hat on the the saddles it makes, and their newest one is unusual, but no less an Ergon than the others in the line.

Ergon USA made an offer to me and many other "social media influencers" to try out this new saddle. Now I wasn't paid or anything for this, and in fact, they told me I didn't have to say anything if I didn't want to. But I am, and here is what I'm going to say for now....... But first- The specs from the Ergon site: 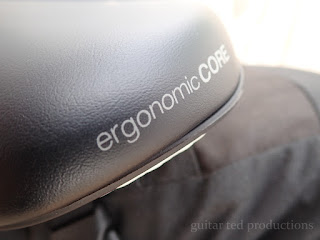 I requested a M/L which fell in my range for fit. Once it arrived I noted the white "E-TPU" core and the nice MicroFiber cover. The saddle appears to be heavy, but in the hand it is remarkably light. I did not weigh it, so I will have to do that at some point.

Besides the cut out which isn't really a "cut out", more of a relief channel, the saddle has a flat profile when viewed from the side. I will say up front that flat profile saddles have not been my favorites in years past. I generally find that a slight "bucket shape" or "sagged center" saddle type is more my jam. Saddles like WTB's, for instance. My favorite being the discontinued SST and the Pure series saddles. I generally run those "nose up" a bit and that tends to keep me from pedaling off the nose of a saddle.

So, now that you have a background in what I prefer, you can gauge the rest of this based upon my personal peccadilloes. Obviously everyone has unique physiology, so I wanted to make some statement of where I am coming from in that regard.

The set up of the ST Core saddle was straight forward. I had no issues getting the saddle in the clamp of my Salsa Shaft seat post and then getting my old Carousel Designs seat pack on there as well. There is nothing non-standard underneath this saddle that would prevent you from using most any accessory meant for under the saddle mounting. With the initial saddle set up being dead level, I tried it for a few rides, but as I anticipated, I needed to "nose it up" to keep myself from feeling like I was going to slide off the front of this saddle and also to hopefully be more comfortable. As I say- personal peccadilloes. Once the saddle was tilted up a hair all was in a happy place for me, so I continued the testing.

The bike I used this on to begin with was the Surly 1X1 commuter rig which I have currently set up in the fixed gear mode. The theory being here that with fixed gear, you pedal every inch of the way, so a shorter commute could reflect as much pedaling one might do in a longer ride. Anyway, I figured that this bike would be a good test mule because of the amount of pedaling I do when I ride it and pedaling can amplify issues with saddles. Plus, this saddle is touted as something that will move with the rider. What better way to find this out?

So, now after a solid month with this saddle pedaling over grassy fields, bike paths, broken up pavement, and "normal" city streets, I can say that, yes, there is something going on here.

My initial reaction was that I had forgotten to pump up my tires the day I first had this saddle on the bike. But I was mistaken, because it was the give of the saddle that was to blame. The rocking motion one makes while pedaling has no resistance since the saddle moves with the rider. When expected resistance isn't there, I almost always blame a low tire, because generally speaking, that's what is causing that sensation. However; my tires were pumped up, and then I knew the saddle was actually working as advertised. After the initial "nose up" adjustment, I have had no discomfort or numbness issues with this saddle either.

My first impressions of the saddle's core material was that it looked a little like a cheap gas station coffee cup, or cottage cheese. I like cottage cheese, so I am going with that. Anyway, I was very skeptical of the material's performance claims and even more so of how it would hold up. Obviously I feel like it works for riding, and it does smooth out road chatter and takes the edge off big bumps, but how did it hold up so far? Well, pretty well, actually.

Obviously there is some bonding agent that holds things together, so I was looking for signs of separation, or any degrading of the E-TPU material, maybe a little discoloration after being exposed to the elements. However; so far, I have noted nothing of the sort. I will continue to monitor this as I keep riding the saddle throughout the Spring.

Plans are to move this saddle over to another rig. Obviously, this is a shape that is meant for a more upright position, so one of my gravel bikes would be the wrong place to try it out. However; I am wanting to do another Fat Bike Century soon, and this saddle is a perfect fit for that activity since I have the proper position on a fat bike for this saddle.

The Ergon ST Core isn't an inexpensive saddle, despite it's "replacement saddle" looks. This is touted as a serious cyclist's saddle on par with touring saddles meant for longer rides. So, the Fat Bike Century idea fits this bill. Look for that to happen probably after Trans Iowa. Until then I'll continue on with the fixed gear Surly and see how it goes. Stay tuned for more soon.......Part Two HERE

Note: Ergon USA  sent over the Ergon ST Core saddle at no charge for testing and I was not paid nor bribed for this review.

I'll be interested to hear what you have to say about this saddle after some saddle time with it. I currently use and love the Ergon SRX3 Pro but since getting the Fargo with a WTB Volt on it I am wondering if it's time to make a change to a less flat saddle.

So, from the conspicuous lack of any influencer in the bike-world offering a positive review, I guess it's safe to say most were underwhelmed and declined to bother to write any review?

@OracleofMumbai- Considering that in this post I suggest that I will be using the saddle on different bicycles and that,"Look for that to happen probably after Trans Iowa", then it would probably stand to reason that the review is still in the making, yes?

It will be a while yet before I "bother" to get you this review. Underwhelmed or not.