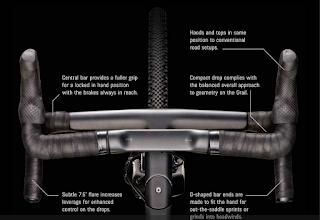 The ultimately predictable responses to the news yesterday about Canyon's gravel bike were all focused on the goofy looking handle bar. There were memes, snarky remarks, outright disdain, and my favorite comment of all:

"Your scientists were so preoccupied with whether or not they could, they didn’t stop to think if they should”.

I didn't say much about it yesterday because I knew immediately that was all anybody else was going to talk about. Too bad, because even without the polarizing bar design I think Canyon missed the mark on a few points. But you probably read yesterday's post, no need to get into all of that again.

I did want to say that I got a comment about what I thought "old road bike geometry" did right. I referenced that yesterday with my 29"er geo remarks, but I wanted to expand a bit here.

First things first- Much of what was done then was exaggerated to accommodate the shortcomings in materials technology, so when I reference "old road bike geometry", I don't mean that I think we need to do it exactly that way today. Actually, what I do think is that a less extreme take on that would be best today. At any rate, the purpose that geometry serves is to introduce the opportunity to design a fork that has fore and aft flex, with the longer offset helping to get the wheel out from under the rider a tad, which is also promoted by the slightly slacker head angle. We're talking something like what I advised Raleigh to do with the Tamland. The original, steel fork version. That head angle was 71.5°, but originally I was thinking 71.0° or 70.5° at the extreme with a 50mm plus long offset. I didn't tell Raleigh to do that in 2012 because I felt it was too radical. But that's what I would do today and it reflects how old road bikes were done pre-WWII. And interestingly, at 9:00am this morning a bike will be introduced by Salsa Cycles that fits some of that criteria. (I have a story on RidingGravel.com about that introduction which posts after 9:00amCST.)

They Made Them Better:

If you've been around here a while you know that I had a dim view of the Teravail Cannonball and Sparwood tires which I tried a couple years back. They were sluggish, heavy, and dead feeling.

I gave the Cannonball tires away for a sixer of beer and the Sparwoods came off last year and likely will never get put back on anything at this point. I just have too many better choices to use.

Then I saw the QBP rep the other day and he showed us at the shop what is up with Teravail. They have revamped the quality of all their tires, plus they are adding some new items, which I don't think I can talk about just yet. Anyway, Teravail has definitely made a change. I handled a Sparwood in the Light casing version which felt completely different than the Sparwoods I have. Plus the Sparwoods will be coming out with a cool, "skinwall" look, but don't think the traditional "tan" skinwall. It is a unique looking tire, but very cool looking as well.

The rep also handed off the pictured Cannonball 42's which are the "protection" models and these are for giving away at the upcoming Geezer Ride next weekend. I haven't decided just yet how that will work, but these were a spur of the moment sponsorship from Teravail to support the ride. Teravail will be making a big push this season, so keep an eye out for that.

Silca is at it again with a hard case style seat pack but this one attaches with a Boa type closure. That's interesting, and maybe unnecessary. I mean, it is one way to do it, and it looks clean and all, but lots of bag makers have tried things like this and have used clips which clamp on to your seat rails and that seems to work well. But I get it- the Boa thing doesn't need a clip which stays on the saddle when you move the bag, and you don't need extra clips.

But besides that, I really do not like how it opens. I know me, and if I had this bag, I would have all manner of things stuffed into it which would promptly fall out when I opened it up. Maybe minimalist, very organized folks would dig it. Not me!

My all time favorite seat pack is still the Topeak Aero Wedge Pack I actually used one so much in terrible conditions I wore it out. But I have another and it is doing fine. I can perfectly pack a good tool kit, open the bag without dumping anything out, and as I say, the thing takes a ton of abuse well. It is about half the price of the fancy Silca one and does a better job, in my opinion. Of course, I haven't actually used a Silca pack, so that may be seen as being unfair, but for twice the price I don't see twice the benefits or a huge increase in design features here.

Sometime this morning Twin Six will also be releasing details on the evolved Standard Rando design called the "Rando XC". I am betting it is wide tire capable and Boosted..... We will see.


Okay, that's it for this week. Have a great weekend and get some miles of smiles in!

I saw the teravail lineup at tradeshow and was impressed also with the changes. When I think of “old” road geonI think of the salsa casserol. That was a great bike. I also think the bigger tired monster-monster bikes will be the new thing. I think Bombtrack aklso came out with such a beast.