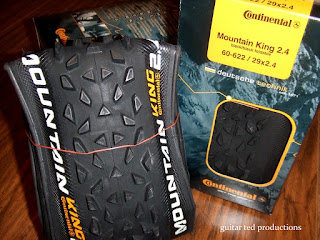 Ten years ago this week on the blog I got in a set of Continental 29"er tires for test and review. These were not the first 29"er tires Conti ever did, but they were hoped to be a much better model than those first ones were. I cannot even recall what those tires were from Conti but I do remember they were summarily panned by the 29"er community at the time for being too narrow.

The other thing was tubeless tires. Everyone in the 29"er community was clamoring for tubeless 29"er rubber. That was also rare back in the day. These Conti tires were not rated tubeless, but the "wink and a nod" feeling I got from the Conti honch at the time made me feel okay about setting these up that way. It took a little fussing, but it happened.

Disappointed feelings abounded though, as the tires measured short of 2.4". That and the squirmy nature of the tread blocks put Conti off the back with regard to 29"er tires as other companies started making some really good stuff in the next few years.

The Winter of '08 was hitting hard back then and it was barely above zero degrees, we had a TON of new snow on the ground, and cycling outdoors was very difficult to near impossible. All of which brought me to wonder why in the heck I didn't pull the trigger on a Pugsley the year before. I probably should have. We had better Winters for fat biking ten years ago, that's for sure!
Posted by Guitar Ted at 1:30 AM