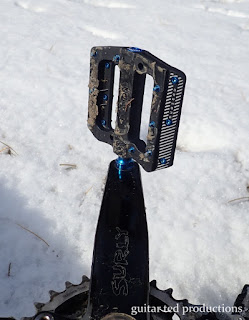 Flat pedals are making a comeback these days. You may have noticed that many mountain bikers and fat bikers are turning to flat pedals again. Not only that, but so are commuters and even some gravel road riders. Bikepackers often use flats if they do rides in areas that require lots of walking. So, if you think all "serious cycling" is done with clipless pedals, well, you'd be very wrong in that assumption.

Long time readers also know that flat pedals figure into my own riding pretty heavily. I'm a big fan of Fyxation's Mesa MP pedals. I've been using them on many of my bikes, but my longest running set is on my Titanium Mukluk which has seen at least four Winters of use now with those pedals on that bike, plus a 100 mile ride on gravel a couple years ago. They show their age, for sure, but they aren't dead yet either!

Well, a month ago or so Fyxation told me about a new version of the Mesa pedal, the limited edition Mesa Subzero, which is based off of the Mesa MP, with the impact grade nylon pedal body and stainless steel pins for grip. The Mesa Subzero also features those things, but they have new graphics and colored pins and spindles. MSRP is $69.95. See the spec list here: 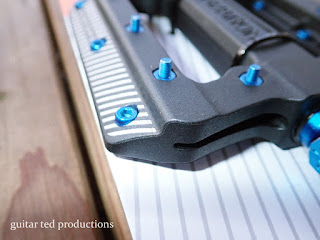 So, obviously these went on my Blackborow DS. Fat biking can put a pedal into some pretty difficult situations. Considering I occasionally commuted on the bike as well, that makes the situation potentially worse. The salty, chemical stew mixed into the "car-slush" can be pretty corrosive.

But in reality, I think the next bike I stuck these on is even more of a test. My current commuter now that Winter has lost its grip on things here is the Surly 1X1 single speed. It isn't just a single speed, it is fixed gear single speed. Kind of makes sense and things can have been said to have come full circle here. A Fyxation pedal on a fixed gear commuter? Perfect.

I think this bike is tougher on pedals because there is no coasting, for one thing, and with my relatively stupid-low gear, I spin like a mad man. I think I'm running a 34T up front with a 19T in the rear. Yeah......low gear! But for sloshing through melting snow and ice, pushing through mud, and riding up and down some short steeps, it works well for me. The pedals have a nice, wide platform and the pins grip well, so despite the fact that I have no foot retention, my feet stay put even at high cadences. Of course, the low gear and big platform work great when grinding through a mud slough or a three inch fresh snowfall.

The fixed gear Surly saw all of that and a good curb smash to boot with no degradation in performance at all to the pedals. I did scratch up the pins a bit, but cosmetically the pedals still look great over all. If I could offer one bit of criticism it would be that the pedals middle section stands just a bit proud over the rest of the flat section, or it is even with the edges, which can result in the occasional, slight foot slip. I've never slipped off this pedal completely, mind you, but I think if the pedal was a bit "concave" in profile it would give a more secure grip on whatever footwear you use. I've been wearing some Keen hikers, so not really very "flat pedal friendly", but I gotta keep my feet warm and dry!

That said, I can't think of a much better bang for the buck than this pedal in terms of the looks, function, and long term performance. If these Subzero pedals last as long as my original Mesa MP's, and there is no reason to believe they won't, then the Subzero pedals are a great take on that classic design.

And Now For Something New:

Ironically, as I was typing up this review news was sent out declaring a new color series for the Mesa MP pedals. This is this products 6th anniversary of being on the market and Fyxation decided to celebrate with a Desert Series consisting of muted green, orange, and "sand" colored pedals. These are Mesa MP's that you may be familiar with, just in some new colors. These pedals are also available in black, blue, red, orange, green, and purple. MSRP is $59.99 for a pair. Check out the story on these from Fyxation here.

So, there ya go. The shop where I work sells a lot of these and there is a good reason why. You really cannot find much of anything as good or better for less cash. I'm convinced these pedals are long lasting, tough, and durable. They are fairly thin, so if you like that idea, they are some of the only options at this price point. If you ride in Winter, the nylon body material does not act as a heat sink and your feet stay warmer. I've heard from customers that have come back to the shop that say the same thing I feel is true about the cold weather performance. Of course, for the rest of the year they work well also.

Next up I am going to stick these on a gravel bike and try out riding on gravel with them for a while. I'll report back on how that goes, but if it is anything like my Fat Bike Century ride which was all on gravel, then it won't be anything other than a good report. We'll see.

NOTE: Fyxation sent over the Mesa Subzero pedals at no charge for test/review. I was not paid, nor bribed for this review and I strive to give my honest thoughts and opinions throughout.

Ted have you tried foot retention straps such of the Hold Fast FRS with flat pedals. I started doing this with my fixie years ago with BMC pedals. Now I runs flats with Hold Fast on all my bikes. You can wear any shoes/boots and quilt resize depending on how tight you want them. The have been great for touring as I get some retention for hills and fast sections but can still walk comfortably or flip the pedals over if my feet need a break. I’m always surprised I neve see similar setups.

@Kenny Cyphers- Well, ever since I ditched toe straps I haven't given a thought to using a strap on any pedal. By the way, the Mesa MP's are not strap compatible, or so says Fyxation. I've never tried it.

I was aware of Power Straps years ago and tried a pair that were on a bike (not mine) once and just didn't think it improved the experience of "being free" on the pedals.

For me, not having anything on my flats is freeing. I get some folks like their feet to be restrained in some way, and I do ride clipless and will as long as I can, but there is something about grabbing a bicycle, hopping on, and not having anything get in my way of that, which is very appealing to me. Straps on the pedals just seem like another obstacle to "just riding".

Again, my opinion, I know others won't feel similarly.

Fyxation makes a Hold Fast style strap but their pedals with the mp in the name will not work with a strap. I don't know if they are too thin to fit the straps in, or if it has something to do with the replaceable pins.

Oddly, the Fyxation site seems to be down currently. Tried to go check them out a little more, guess I will have to check back later.