Saturday was supposed to be a decently warm, low wind day. So, I earmarked it earlier on last week as a training ride day for the upcoming Gent's Race. My goal, for my out-of-shapeness, was at least 30 miles, or about half the distance I'd have to ride at the Gent's Race.

Then they kept lowering the expected temperatures and on Friday they were talking about the probability of snow. Up to 2-3"s of the stuff! Bah! I decided this ride had to happen no matter what. So, Saturday looked decent in the morning, but it was chilly. Lower 20"s but then by around noon it was supposed to get up above 30°F and I figured that was good enough. Low winds from the Southeast wouldn't affect the way it felt too badly. I left 'fore noon and headed South to the "usual roads".

I decided not to affix the damnable GPS device to the bike. Sometimes computers and gizmos just get in the way, with me they do anyway, and I wasn't in the mood for more "data". All I needed to do was ride a bicycle and go reasonably fast for 30 plus miles. Do I really need a computer to help me with that? I don't think so. A GPS track and more things to distract me on the ride wasn't fitting in with my needs. Mileage for the year? Pffft! Nobody is going to give a rip about my mileage but my ego. I decided not to feed it. Besides, counting miles is fairly easy in Iowa, and it keeps me sharp.

Before my ride I wasn't feeling very "right" and I was a bit concerned that this ride would not be successful due to that, but as I got past the snowy bits on the Sergeant Road bike trail and on to good ol' Aker Road, those feelings subsided until I actually felt quite good. The road was okay. Mushy on the sides where there was snow melting, but the two-track left by car and truck traffic was solid and dry. I was rolling along very smoothly and at a decent clip.

Interestingly, all this fixed gear commuting had me expecting back pressure on the pedals when I let off on the power a bit, and coasting was......weird. I almost had to remind myself that I didn't have to fear not pedaling a few times. Now watch, when I go back to the commuter bike this week I'll forget I cannot coast again!

Things were clicking off really well until I passed the intersection with Quarry Road and Aker Road. South of there the gravel had patchy wet spots that were building up goo on my tires. Then after another mile it got positively mushy. I had to slow it way down so I might have a chance to catch my rear derailleur if it got jammed with muck and started rotating backward around the cassette which would eventually shear it off. The fenders were packed in, mud was shedding off the back tire and flinging in the air. Pedaling was.......well you can imagine. Laborious. Even with the wide 650B X 47 tires, I was cutting a groove into the roadway.

At Tama Road I reached my minimum halfway distance and Aker Road South of there looked worse than where I had been. I decided to stop, shake off as much muck as I could, drink, take in a couple gels, and go right back the way I came for a mile. Then I figured on going Eastward a mile to Beck Road and back North on that for four miles.

Beck Road is hillier than Aker, but I figured it would still get better as I went North, just like Aker was better that way. However; I failed to factor in that Beck Road gets almost zero traffic, so there wasn't the packing in, nor was there the lack of snow as well. Beck Road was, for all intents and purposes, my absolute worst choice. Mush, mud, and ice in places was making the going slow, but what was worse was how my drive train was starting to "act up". Jumping chain, noises, and I could feel the derailleur start to want to wrap up. Not good!

The final straw was cresting a hill where I saw what looked like a shovel full of wet, gritty gravel shoot out from under my front fender, and then the rear wheel was surfing so badly the entire bike was weaving uncontrollably down the slope. I had experienced bikes doing this on muddy mountain bike courses, and the next stop, usually, on that train of events is hitting the deck. I was off the bike and walking as soon as I could slow down to a stop. 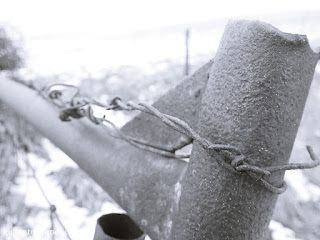 I found a fence, rickety and barely standing, with wadded up balls of wire near it representing what must have once been a barbed wire fence at one point in history. I leaned my bike up against this mean structure and started cleaning off the muck and mire from the derailleur jockey wheel. Then I used that good ol' DuMonde Tech to lubricate the dry, crusty chain. I bounced the bike several times to shake off the grunge and then I gingerly pedaled off to the "T" intersection with Petrie Road.

Fortunately, there was a wide swath of untrodden snow on the West side of the roadway which I could ride on swiftly. Sure, there was a bit of resistance, but the ground underneath was still frozen and the going was safer and far easier. Petrie Road was good, and then once I was back on to Aker it was "home free".

That section on Beck Road was about as bad as it gets without the road being a Level B. I was so surprised I made it out of that four mile section without wrecking something and having to call in for assistance. My decision to jump off and walk a bit was a judicious one and having the tools and lube along to take care of my dilemma was a good thing. I don't always need all that stuff, but when I do, it saves the ride!

So, the ride was a success after all. I got in over 30 miles and I felt pretty good afterward, despite having a terrible time staying awake later in the day. Now with better weather, Daylight Savings Time initiated, and not a ton of obligations this week, I might sneak in a couple after work gravel rides. More time in the saddle is needed ASAP!

Oh yeah, and the Robins have invaded big time here. I saw them all over Saturday. Red Wing Blackbirds are starting to stake out nesting spots, and Spring will be starting to get things greener from this point on. I cannot wait!
Posted by Guitar Ted at 1:30 AM

Probably a stupid question form someone who spent the weekend on pavement complaining about what this weeks snow did to my normal gravel loop. But, besides a stick to scrape the mud off and maybe the latex gloves brought for chain problems, what tools did you need to use to clean up the mud? I don't normally bring extra chain lube and am wondering what other things I might want to think about adding to my seat bag.

When I do 30 miles in bad conditions I just round up to the nearest 50 miles. 30 in slop can be way harder than 50 anyway.

Different topic entirely- Has there been any wind tunnel studies to show that aero gravel wheels provide a benefit?

I kept expecting to get rained or snowed on when we were riding Saturday but it never did, now I know where it went. Hopefully more sunny, warm days are in the near future.

I rode those roads last night and could still see your tracks. Looked like some tough conditions. The roads were great yesterday!