Hands On With The New Trek Checkpoint

Today was the "official" reveal for Trek's worst kept secret in gravel bikes, the Trek Checkpoint. If you knew where to look, information on this bike was out on the web in January, images in mid-February. So, this date wasn't that big of a deal. Heck, many dealers already had them on their show floors last week.

That said, I posted a story about this important development on RidingGravel.com today early in the morning. I figured that would be that, unless I was to see one in our shop in the near future. Little did I know that "near future" was today! Our Trek rep showed up wheeling in this black beauty in the morning. What a treat to get to see the top of the line Checkpoint SL6 in the flesh.

This is a size 54cm, bone stock Checkpoint SL6 with a set of Shimano pedals bolted on and nothing more. The bike belongs to our rep. It weighed in at just a hair over 20lbs ready to ride. The spec is full Shimano Ultegra 11 speed with the newest Shadow rear road derailleur and toggle front derailleur. Wheels are aluminum and the tires are Schwalbe G-ones with tubes. These tires are 35mm wide, for reference. Brakes are hydraulic flat mount Shimano units.

Following will be a bunch of images and comments. 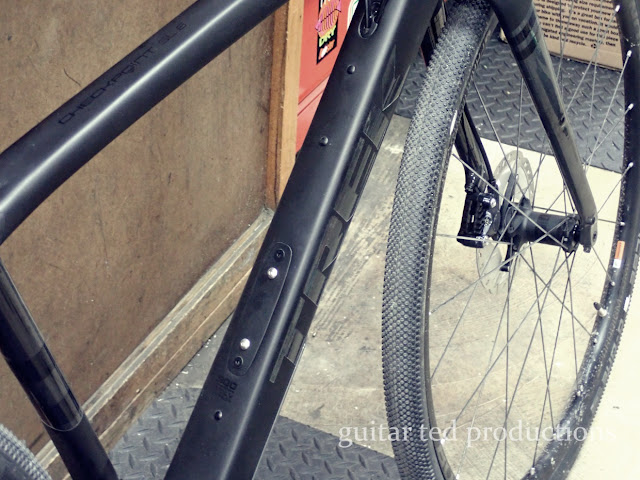 The two silver fasteners hold the battery door and if you run Di2, that's where the battery goes. Note the front, 12mm through axle and flat mount brake. 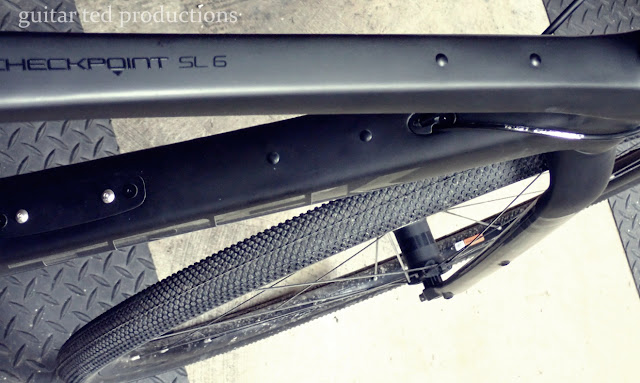 Notice those two "buttons" on the top tube? Those are plugs covering the bosses that will eventually be compatible with a future Bontrager top tube bag, or they could be used with a custom bag set up to accept this mount. Note also the two bosses on the fork. They won''t work with an Anything Cage- we tried- but Trek does make a carrier for their 720 model which is called a "720 Mount", so you could attach dry bags. We don't know if a Wolf Tooth B-Rad 3 would work, but it might. 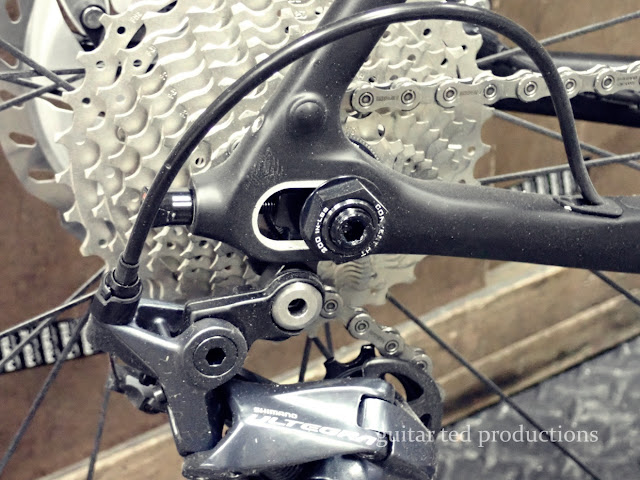 The Stranglehold drop out allows for adjutment to the wheel base and for an easy, secure single speed set up. Notice the "button" on the lower seat stay? That's a cover for a lower rack mount. It's hard to see, but just to the left of that is the "hidden fender mount" boss.

A look at the flat mount brake caliper and Shimano's funky Ice Tech rotor. That skewer for  the through axle is where our rep put it, by the way....... 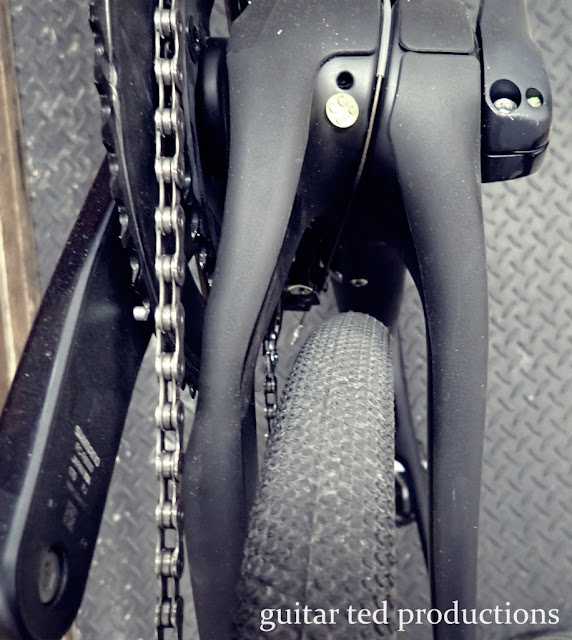 Note how the right chain stay, (here on the left since we're looking at this upside down) snakes through the gap between the chain rings and the tire. That chain stay is dropped lower so it didn't have to be wafer thin. Trek claims room for 45mm tires here. We're thinking that's for dry roads only. The bottom bracket is Trek's press fit style. 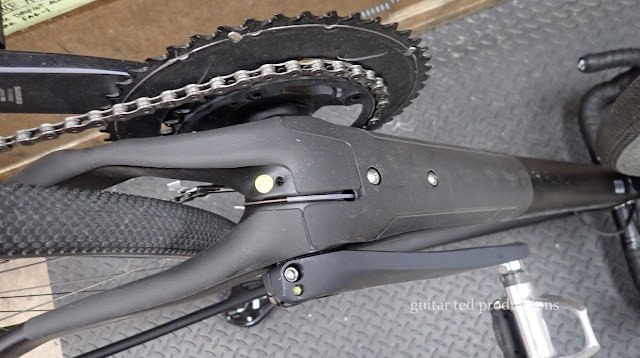 Another view of the undercarriage. Note the rubberized lower down tube and chain stay areas. This is a smart move by Trek to not only keep the noise down when rocks hit, (and they will), but to protect the carbon as well. The silver buttons are the two down tube bottle bosses. The bottom bracket area is way beefy and laterally stiff. (We pushed on it HARD) and those big beefy chain stays look stiff as well. Had Trek not used the dropped chain stay on the drive side this view would not look the same. 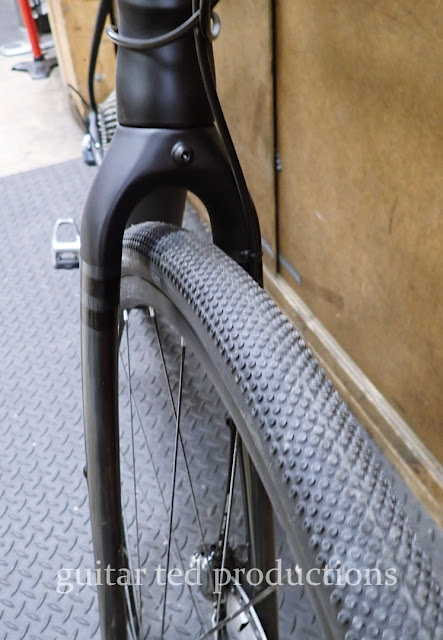 The fork  has boatloads of clearance. Note the upper fender mount on the fork crown. You probably could mount a light off this for a dyno hub set up. The carbon SL6 and SL5 feature a full carbon fork. The aluminum ALR Checkpoints have alloy steer tubes with carbon fork blades. 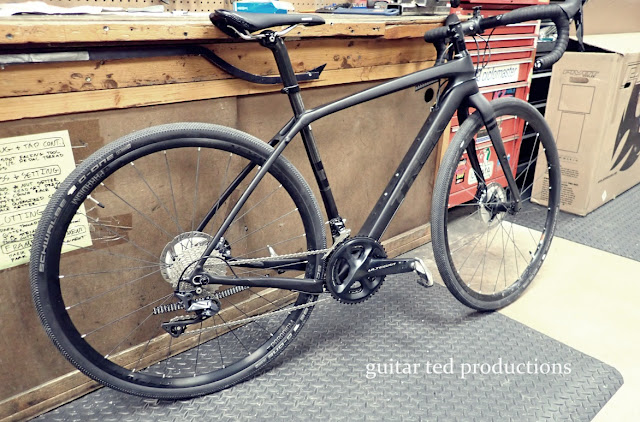 Carbon Checkpoints will be tough to land until late Summer. Most of the first production has been spoken for already. Aluminum ALR4 Checkpoints are readily available in the darker colorways. Brighter colored ALR Checkpoints should arrive in April. I am thinking about a Checkpoint SL5 in Cobra Blood colorway but it looks as though the soonest it might happen is in June. Of course, all of this is subject to change.

What I Think: The Checkpoint is a really sharp, well thought out first effort. Trek went with a completely new frame and our rep stated it is actually lighter than a comparable Domane. Trek did squeak out the head angle to be slightly steeper than 72° in my 58cm size, which makes me wince just a little. I would actually prefer it be a degree slacker and have a nice, long offset on the fork, but this is liveable. The big news for me is the bottom bracket drop which is only a few millimeters higher than a Domane in comparable size, but still well into the 70's. I was really hoping Trek would stick with that cue from the Domane and they did.

Trek doggedly sticks with the press fit style bottom bracket, and I'd rather see a threaded bottom bracket, but again, since I work on these all the time I am familiar with how they work. So, not a huge deal. The carbon armor around the bottom bracket is a very smart. I like that Trek thought about that.

I'm not really big on carbon, but hey......it is the fashionable thing these days. So what about the ALR aluminum version then? Well, for starters, Trek chose not to use the ISO Speed decoupler on it. Trek claims that in their testing it wasn't as effective as a big tire on the bike and so they chose to not use it, since it would also drive up the price. The tested ALR prototype with ISO Speed would have been cool to try, but we will have to take Trek's word for it. So, what about front ISO Speed? Yeah......I guess it would have been nice. The Domane Gravel (rebadged Domane Disc) has it, but I can always use a ShockStop stem to get that sort of comfort. And who knows if, or when, I might ever get a Checkpoint? Hmm......

Update- I thought about a couple of other points- Pricing- The Checkpoints are pretty reasonably priced for what you get. Oh, and these are FULL Shimano groups with hydro braking. Nice. Handlebars- Straight drop roadie style. Not going to fly with me, but Trek is trying to appease the roadie riders with that spec. I think they are thinking this may cross over to recreational road riders and the spec speaks to that. Honestly, the rack mounts say "RAGBRAI" and the handling will be a big sell to casual roadies. (Where do you mount the kickstand?) Throw in some 30mm tires and ride all day. I get it, but the front end geo, handle bars, and the stiff looking fork are definitely NOT gravel friendly. Again- I can probably live with the front end given the BB drop, but I won't like those bars and the bike needs a Redshift stem PRONTO for gravel travel.

Anyway, I hope this sneak peek was helpful. I'm sure we will have some of these at the shop where I work in the future.
Posted by Guitar Ted at 6:30 PM

As the aluminum frame does not have dropped chain stays, I am afraid the chain stays might be very narrow near the drive side BB area (to clear 45c tires) This implies lateral flex and power loss compared to the beefy chainstays in the carbon model.
Riding the aluminum model would make it clear. Let us know riding impressions if you get a hold of the Aluminum model.

That's really a gorgeous bike! May have to wait for version 2 or 3 to get any kinks worked out. Looks like Trek has become affirming of the gravel habit. I've ridden a couple of their cx bikes on longer gravel rides and the geometry on those those bikes isn't the best for endurance. Would like to get my hands on one.

Any idea of loaf limits on the rack mounts?

@Jimbo- I've got nothing on that, I'm afraid.