Okay, we weren't sure they would make it before tomorrow's inaugural C.O.G. 100, but they did come in! The C.O.G. 100 jerseys we put on one time only pre-order made it just in time despite a snafu in the initial run which required another run to be produced.

I should have these along with me today in Grinnell at the Peace Tree Taproom and they will also be at the start/finish area at Miller Park. If you pre-ordered one, just hit me up and you can pick yours up.

Those that don't make it to Grinnell, or had made arrangements for shipping, your jerseys will be going out next week. Thank you for your patience! I tried mine on and it fits, (I could stand to lose a few Winter LB's), so I am confident the sizing should be okay for everyone.

A little about the design: I worked with N.Y. Roll and we decided on something simple, yet classy. Something that had roots in older, Worlds jerseys or National Championship jerseys. The tri-stripe was a no brainer. We used "John Deere" influenced colors since that reflects the Mid-west, Iowa, and is N.Y. Roll's place of employment. The lavender was chosen since I kind of like purple, but we didn't want anything too dark, so lavender was the choice. The central "shield" was an inspiration from the Iowa Highway Patrol and their "kernel" shield design and has the name of the event versus "C.O.G 100 SS Champ" like the winner's jerseys do. Sorry! No extra jerseys were made available. We may have some extra C.O.G 100 caps and posters. Stay tuned...... 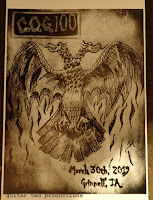 Yes, I leave for Grinnell today to get this silly single speed only event in gear. (Pardon the pun) It will be kind of odd, since a few of the riders are old Trans Iowa regulars and are coming because I am involved in putting this on. Really, that is quite humbling and I sure hope that the C.O.G. 100 does live up to their lofty expectations. It is a compliment of the highest order that these folks have decided to come to this for those reasons.

I'll have a lot more to say once the event is over, but obvious comparisons to Trans Iowa will be drawn by many, including myself. I have pretty much summed up my feelings about things, but I will wait until my report to give that take. Stay tuned for that and an event recap Monday.

Of course, since it is early Spring, weather will be a factor. Rain is forecast for today down that way and depending upon how much Grinnell receives, it may be "quite interesting" come tomorrow. The "C.O.G." part of this event refers to "Creatures Of Gravel", of course, and if conditions are what I expect them to be, we will see exactly what "creatures" are created by the wet, muddy roads. It might be epic.

Those who are inclined can follow along on Instagram and Twitter where I will be posting images and whatnot. Search the hashtag "#COG100" for my posts and perhaps those of others.

The Latest In Fire Hazards For The Home:

The stories of e-bike fires seem to be getting more common these days. The latest big one occurred recently at an e-bike charging station for Citi Bike, a New York e-bike share concern. (Story here)

I asked a vendor who represents a company that sells e-bikes (Hybrid Powered Bicycles) recently about home owners insurance policies and HPC's. I wondered if there were any concerns that should be covered with potential hybrid powered cycle purchasers in the future. His reaction was that it is of great concern to home owners as a fault in a battery charging system could easily cause damage or great loss to a home, and that insurance companies are becoming increasingly aware of the issue. This rep suggested that e-bike (HPC) batteries be charged only in a supervised manner and that they be stored in a place, preferably not attached to a home. Furthermore, it was told to me that most, if not all e-bike batteries can be permanently damaged if they are not charged up throughout the off-season. If they are left to drain down, it would be likely that they need to be replaced, and that at great cost.

I find it odd that these sorts of possibilities are not discussed more frequently, or at all, by the cycling media. I think it behooves us all to be upfront about these things, if we're to believe that this is where cycling is going in the future. (And trust me- the cycling media and advocates of cycling are really pushing hard for hybrid powered bikes to take over the marketplace) Obviously, it is an issue that is of great concern and technologies will certainly be applied by some to mitigate the dangers, but you can bet that not all companies will have such altruistic aims.

It is definitely something that bears watching.....

Okay, I'm off do do some event promoting of the entirely human powered variety. See ya next week!

Those jersey's look pretty sweet, can't wait to get mine tonight.