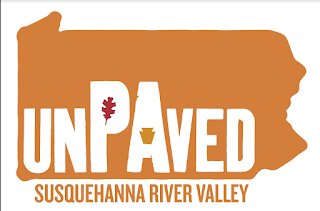 Over a year ago I heard about a brand new event that was going to be getting put on in Pennsylvania dubbed "unPAved of the Susquehanna River Valley". It sounded ambitious, because the organizers were saying that they were aiming, eventually, to be the premier gravel event on the East side of the US. On the order of the Dirty Kanza, or Rebecca's Private Idaho, as examples of what they wanted to aim for.

I was skeptical at first, but after dealing with one of the organizers, Dave Pryor, it became immediately apparent that his heart was in the right place and that he respected the gravel community's feel and vibe to a high degree. Of course, coming from a background of bandit cyclo cross event promotion, it made sense, but at the time, I was none the wiser.

Anyway, fast forward to last year's Dirty Kanza. Dave was going to be there volunteering to get an inside look at how the DK200 was organized and produced. I met him as he shadowed Jim Cummings, who I have known for years. Come to find out as we spoke to one another, I had already met Dave once before. At a cyclo cross race in Las Vegas. He was the guy in the full-on bacon printed suit. I remember him being pretty cool and interesting at the time, but as it was pure mayhem at that point, I did not get a lot of time with him then. I just knew him as "Bacon Suit Guy". Now I had a name for the suit......er face!

So, anyway, Dave twisted my arm pretty hard to come out to the inaugural unPAved, but I had already committed to too much at that point and I couldn't make it work. That seemed to change this time. I have N.Y. Roll to blame. He found out about this event separately from me and he told me this past Saturday he intended to register when registration opened Sunday. I told him that if he got in to let me know, because Dave was twisting my arm again already via an e-mail sent last week. Well, N.Y. Roll got in.

So, some strings were pulled and now I'm in the event too. So, come mid-October I will likely find myself in N.Y. Roll's Subie headed East to Pennsylvania. Never been there before, so this could be interesting. I do know that with a promised near 10,000 feet of climb over 120 miles that it should be a challenge to finish it out. But, I hope that having a bit more temperate conditions to ride in will be to my advantage. These hot, humid rides are not in my wheelhouse. That said, I'm not going to not do GTDRI and Gravel Worlds. I know.......stubborn old coot!

Now is the time to start getting ready though. I hope to be piling on miles starting now. The weather has turned and only the roads need to catch up so I can start getting fitter and more importantly, get these test/review items that have back logged on me going forward again. That should make riding a priority, then after the glut gets cleared up I can get on with things like the C.O.G. 100 and the Renegade Gent's Race. After that my April is wide open.

That has the potential to just be super gorgeous that time of year. There may be some hills to climb!

Bring a bandana. Trust me. See ya there.