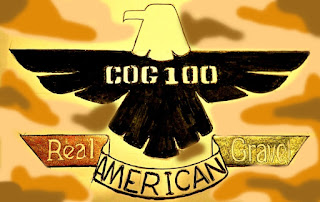 Please read the event details on the site and make sure that you understand and agree with them. If you register and complain after the fact, we are not going to put up with it. So, make sure you are onboard with ALL the rules, suggestions, and registration details BEFORE you register.

We'll say it again- This Is A Single Speed ONLY Event. Yes.......really. This means you will have to either (a) convert your bike to fit the rules or (b) borrow a single speed, or (c) buy a single speed bike to get into the event and participate in it. We will have inspections to determine if your bike is within guidelines, so don't show up with your levers zip-tied thinking we'll just turn our heads the other way. That isn't going to happen.

We are going to have hats as part of your entry fee, and we are going to offer an optional t-shirt in two designs. First will be the livery for the event seen here. (Maybe not the camo part.....we'll see) The other will be a simpler shirt that will say "Real. American. Gravel." Both designs will be $20.00 and you can buy one, two, or none. It's completely optional on the shirts. We decided to not offer a jersey, like we did last year. So, no jerseys.

Preemptive Strike: So, maybe some of you are thinking, "Well, well! I thought you were all about breaking down barriers and being inclusive. So what's the deal with single speed only then?" This is a fair question. I'll go back to my original musings on this type of event, "Why not?" No one, that I was aware of, was doing anything like this. There are a rather large number of single speed fanatics in the ranks of gravel riding. I figured, hey! Let's offer a focus on those riders.

Secondly, a single speed gravel bike is easy to come up with. It cost little to nothing to "dirt bag" up a single speed rig. If you don't know how, consult your local LBS with some knowledge in SS MTB. They will know. And speaking of mtb bikes, an SS 29"er would be a banger C.O.G.100 rig. Anyway, it is about the opposite of most of these "Big Time Gravel" events where unless you are sporting a $7K carbon rocket with carbon hoops and electronic shifting then you're off the back. Making the event single speed only kind of backs that "arms race" thing up a bit. Actually, it is more inclusive, come to think of it.

Anyway, if you want to come but you just cannot get around the single speed hurdle, (meaning you can't come up with one to ride, not that it is "harder", or that you cannot ride it) , then get a hold of me. N.Y. Roll and I will make it happen. So.....you may not like the bike, but that won't be a hurdle.

Questions? Hit me up NOW!
Posted by Guitar Ted at 2:30 AM

@teamdarb- Yes, he was really strong on that bike. I do not think that sort of thing is for everybody though!

Is this event still planning to be related to supporting veterans of our armed forces as was previously mentioned in a post?

@Unknown - We are going to do something. It is not going to be reflected on the C.O.G. 100 Registration page. We have no way to distinguish whether or not someone is being legit with their representation of their military service, or if they were just taking advantage of a discount, and we wanted this to be fairly implemented. So, N.Y. Roll and I have a plan we are working on which will benefit military folks, recognize them, and be fairly implemented.

It probably will be effected at the pre-race gathering at Peace Tree, but not necessarily so. All I can say now is "Stay Tuned".

Didn't know there was a veterans aspect to it. I really appreciate that!