A Year With The Ti Muk 2

Well, as of last weekend I've had the Ti Muk 2 for a year. This bike, which was an incredible gift made possible by my brother MG and Sam, plus many generous people who donated their money toward this purchase, has been a huge blessing to me over the past year. I will never forget the generosity of all of these people, and I am always reminded of how grateful I am every time I throw a leg over that bike's top tube.

So, I thought it would be a responsible thing, and perhaps an interesting thing for some of you out there, for me to report back on my first year on this amazing bicycle.

The heart of this bike is the titanium frame, made by Salsa Cycles, and which features their Alternator drop outs. These could be swapped for specific uses, like single speed, or, as in this case, for an internal geared hub. The hub is the legendary Rohloff Speedhub with 14 internal gears, evenly spaced, for a wide gearing range. This results in a single chain, cog, and chain ring externally for simple maintenance and maximum durability. It also makes for nothing dangling off the bike to get ripped away in thick underbrush, or on rocks, etc. You can read the specifics on the original spec I got the bike in here. There also you can see the fine folks names who made this happen. For the current spec, go to this post.

The past year has been pretty amazing with the Ti Muk 2. I had a learning curve with how to ride a Rohloff and how to maintain it as well. I managed to get the bike out in all sorts of weather, conditions, and terrain types. I can honestly say that my assessment that this sort of bike is the perfect incarnation of a fat bike still stands after a year's experience on this bike. Sure, it has its limitations. But overall, this bike handles more than I thought it could and is better at everything I used the original Ti Muk for.

There are times when the wheels and tires just aren't quite enough to float me, or to tackle big, deep snow. But then there is the Blacborow DS for that. Otherwise this is the fat bike I use for everything else. The best thing about it, other than that it has the Rohloff, is the wheels. The combination of carbon Whiskey hoops and tubeless Terrene Cake Eaters is so good. These wheels spin up really easily. The Cake Eaters roll pretty well on pavement, for fat bike tires, do real well on gravel, and all the fat bike stuff as well. As an example, yesterday I had mud patches to negotiate. Deep ones. The Cake Eaters walked me right through.

The other thing I added after getting this bike, which I have found to be really useful, is the Alternator Rack. With the addition of a dry bag and two bungee cords, I have a makeshift 'trunk' capable of carrying all manner of cargo. Just yesterday I hauled four foldable tubeless tires home that way. I have also used the bag and bungee system for clothing, food, and running errands. Of course, the Bike Bag Dude bags are another super useful addition to this rig as well. 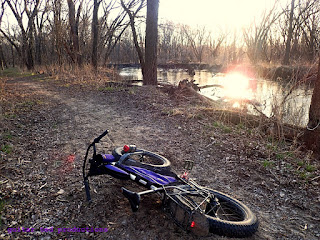 The generator lighting system, a SON front hub, SON rear light, and a Busch and Mueller head lamp, work all the time I am moving and even sometimes when I don't. Of course, when I've ridden, the standby capacitor gets charged, and when you stop it drains to keep the lights on. They stay on at full blaze for about eight minutes, by my not so accurate timing of it yesterday. That'll get you by at a traffic stop though, so that is pretty cool. (You can see my tail light lit up at the left here as I was taking this image.) Those lights work great at night for seeing where I am going too, and not having to think about lighting is a really nice thing. I highly recommend dynamo hub lighting for commuters or anyone that rides at night.

The Ti Muk 2 does not do everything super well though. In fact, my old Ti Muk rode slightly smoother, but that was due to it having the super-plush On One Fatty Fork which was carbon and an 1 1/8th steer tube. The Ti Muk 2 has the Advocate Cycles Watchman aluminum fork with a tapered steer tube which is not as smooth. I've mentioned it before, but a Salsa Cycles Kingpin Deluxe Fork would be a worthy upgrade to the Ti Muk 2, and that fork would expand the carrying capabilities of the bike with the addition of a dynamo route for the hub dynamo I have. But........five hundred bucks! Ouch. I can live with what I've got now for that. Maybe someday I'll throw on one of those Redshift Sports stems and that'll be that.

The only other nit I have is that my rear fender hack is not quite long enough. I must modify it to keep my backside really clean all the time. But other than this, the Ti Muk 2 has become one of my favorite bikes. I'm really grateful, and really excited to have it. It has pretty much become my mountain bike, snow/mud bike, bad weather commuter, and Winter time gravel bike. It is an amazing piece of machinery. It's so good that I am really close to saying I wouldn't change a thing about this bike. And if you know me, that's really saying something.

The immediate future for this bike includes use in the Fat Bike Century and maybe- just maybe - a Sub24 overnighter.

Thanks again to all of you who had a hand in bringing this bicycle to me.
Posted by Guitar Ted at 1:30 AM

I remember when you posted an announcement when this bike was gifted to you. I recall thinking,"Wow what a nice bike!" You are truly blessed with fine friends!

Stoked that this is still working out for you. My Ti Muk is still pretty damn comfortable for what I use it for.

Love ya, Brother!! Thanks for being you.