A Question About "The Quest"

I recently got another question in the comments section that I thought would be best answered in a post here. It concerned "The Quest". The grand name I have given to my attempt to have ridden every road in Black Hawk County that is gravel or dirt before the end of the year. So, I am going to get to the question here, but first, a bit of background to set this up.

Riding every gravel and dirt road in the county was never on my radar as a thing to do until about mid-Spring. Of course, I'd been all over parts of Black Hawk County for years. I really started riding gravel around here in 2005 or so after Trans Iowa got going. My first 'go-to' route was Ansborough Avenue to Tama County and back, which I did several times until I got to thinking about trying something else. That's when the 'explorations' started. So, over the years, I had ridden a lot of the County's gravel and dirt roads, but not all of them. I'd stuck to routes mostly South and North of town, never really going East, and not all the way down to the Southeast either.

Then N.Y. Roll took me on a ride in March of 2019 that kind of opened up my eyes to some 'other alternatives' around the South of Waterloo. In November of 2019 I went on a ride with him and we went way down into the Southeast part of the county and I saw a lot of opportunities to ride in that area for 2020. So, by the time I'd seen a post by "T.S" that he'd ridden all of the roads in a county North of us, the pump was primed, so to speak, and the idea of getting all the gravel and dirt roads ridden in the county was hatched.

As near as I can tell, this 'questing' activity started in April, right about the same time we all entered into this.....whatever we are calling 2020, and I set off on a different ride on gravel every time I have ridden since that month. That's a LOT of different rides and it has made this year a LOT of fun in that regard. So, this brings me to the question, finally.....

Question: How do you keep track of what you have ridden and what you need to ride yet?

Answer: The first thing I did was to research where I had already been in Black Hawk County. That was accomplished by studying the Iowa State Department of Transportation's colored PDF map of Black Hawk County. (Image above) I traced out all the main routes I had ridden right away. Not physically, but just by looking and remembering where I had been. I then had to research the blog on a few questionable bits, but it didn't take long for me to realize that most of the Eastern half of the county had been unridden by me at any time with the exception of one ride I did to find a 'lost Level B road' in the very Northeastern part of the county. I'd been on a couple of roads as far over Eastward as Dunkerton, but not many of those roads were known to me out that way.

Oddly enough, much of the Western half of Black Hawk County I had ridden at one point or another, leaving little to do over there. So, most of my 2020 has been spent riding in Eastern Black Hawk County and keeping track of it has been very easy, actually. This is due to how I was able to break up the task into bits as you can probably figure out already if you've been following along. 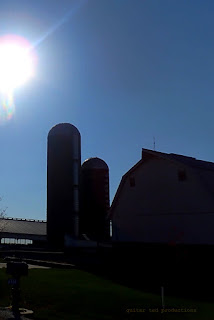 I tried to do rides in a systematic way to 'mop up' every road in a section, then move on to another, so as not to forget anything. Although certain bits still need cleaning up due to their not fitting neatly into a ride plan. Those plans were often considered for several days on end well ahead of rides to get the maximum benefit from each ride. Roads that were not fitting neatly into packages or that were random, short bits here and there were put off till the end of the quest where I plan on trucking my bike around to do out-and-backs and get the thing finished off.

So, this has been a well thought through plan and I've tried to be somewhat systematic and thorough in my execution of the plans. This has been tempered by opportunities related to work, family, and weather. But even though I've had to pass up chances to ride, it looks as though I will get this quest accomplished this year with no problems. I always double check the map to make sure I haven't missed anything and I am pretty sure I am on track. That said, "T.S." did use a physical map he marked up to keep track of his efforts. Neither way is right or wrong. There are no rules, but just what we think is best for our concerns.

I'll have to consider what to do for an encore, because I know I am going to miss doing this after I am through. That said, there are a LOT of roads I'll never ride again in Black Hawk County! But there are many that I hadn't ridden that I do plan on revisiting time and again. This has been a great way to see and learn about where I live and get some perspective. It has also been a fantastic way to get away from this election cycle, COVID-19, and all the mental garbage I have been dealing with that was percolating due to these things going on around us this year.

I am extremely thankful for 'The Quest" and how it got me away from riding the same-ol-same-ol roads I got stuck to riding out of habit. In fact, I haven't been on those roads at all since doing some testing on Riding Gravel reviews back in July, I think it was. Anyway, there ya go! I'll have a bit more to say about this and other bits of 2020 in my "Rear View" retrospective which I will start writing up in a couple of weeks here.

Interesting tidbits about your quest. I have a similar on-going quest as I'm sure many other people do on VeloViewer (connect through Strava), where the world is divided into squares, and it keeps track of all the squares you have visited. You have a maximum big square and a maximum cluster you can get by riding in the correct small squares. You should check it out if it sounds interesting.

@Greg - That sounds like fun. Thanks for pointing that out. However; I am about the most analog person you will meet on a bike. I generally almost never use a computer and electronics? My iPhone gets pulled out every so often so I can look at a map, but that's it.

Heck, I even write out my own directions on scrap pieces of paper and put that in a zip-loc bag for guidance. :>) No GPS, Strava, or what have you here! That's why I rely on that DOT map so much. I've even memorized bits of it.

Ha, I am right there with you. A fair bit younger though. Just the other day I was riding a section of the D2R2 long route. A fella stops and suggest he will text me a route. I pull out a ziploc bag full of multicolor index cards. He seemed confused. I explained I would write the directions down if he would dictate them to me or the link to check later. Cashiers seem to be annoyed when I request a receipt for something a dollar. Really I am just collecting scrap paper to write on or as a fire starter. -Wilson

@teamdarb - I have heard from others that the D2R2 route is really good. I'd like to ride that sometime.

Be ready for some abrupt elevation changes. Nice and quiet out there. Very few cars. I appreciate ridable event routes which can be ridden anytime without fear. Some event routes are only safe on the day of. At some point the route was nearing 2000 feet. I would really like to find a copy of the Mystery Route. -Wilson

I've been using Wandrer to track my progress through Omaha, and it's really helped incentivize getting me out of "route ruts".

I still plan my routes and write up manual cue cards before going out for rides, and I let Wandrer keep track of my progress in the background. At the end I get a nice map and a few charts tracking my progress (I'm 14.31% through Douglas County).

Trans Iowa Stories: The Wind, The Hills, The Lightning!! Part 2

( L-R) Williams, Shotz, Gleason. The T.I.v10 leaders at North English  " Trans Iowa Stories" is an every Sunday post which helps ...