The week between Christmas and New Year's Day was packed with news and one of the things that came out late enough that it didn't make the "FN&V" was the release of the Standard Rando v2 in titanium. I'll be honest, I knew of this last May when I started talking to Twin Six about getting the steel v2 Rando. They mentioned this was on the horizon and wanted to know if I wanted to wait to get that instead. I decided it was in my best interest not to spend over twice the amount a steel v2 Standard Rando would cost and wait for a bike that might not arrive when Twin Six was thinking it would at that time. Well, I have to say that I am good with my decision. Here's why.....

First off, I wouldn't have had the bike at all until well into 2021. At least completed, and then I'd have to wait for good weather. So, all those miles I put on the Gravel Bus wouldn't have happened on that bike. Now of course, that would not have made a big difference since I have other bikes to take up the slack, so to speak. But there were two other things concerning the Standard Rando Ti which I didn't like when I looked into it on New Year's Day. Had I waited, I would have been a bit disappointed.

Those two things are maybe not a big deal to you, but I really wouldn't have preferred either of these two things in a titanium bike. One was the curved top tube. Aesthetically it goes against my sensibilities for a 'classic' looking frame, which I consider the steel version of the Standard Rando to be, and what I think is one of its strongest visual cues. Now, I could have gotten over that, maybe, but they went with a 31.6mm diameter seat post. Almost every bike I own runs a 27.2mm post, and they are more compliant as well, no matter the material, compared to a like 31.6mm sized post. Curiously, Twin Six did not use a dropper route on this bike, which would have made the choice of a 31.6mm post a sensible one. Yes- I could get a shim, but...... Well, let's just say that I wasn't too impressed by this offering when I already have the steel one and it does exactly what I need it to do.

Interested? It'd be a fine bike , I am sure. Here's the webpage.

I woke up New Year's Day and did what I always do first thing- Swing my legs out of the bed, pry open my eyes, and slap on my Apple Watch. This has been a routine thing for me for just over a year. I got my watch as a hand-me-down from Mrs. Guitar Ted, as I do with most techie device-like gizmos. See, she was into fitness tracking for a while. I ended up getting her first one, a Fitbit, when she upgraded. It was one of those simple, bracelet styled ones. Then shortly after that I got her 'real watch' styled one when she went full-on and got an Apple Watch, the first gen one. Meanwhile, I tried to make do with the Fitbit watch. I ended up getting the first one warranted when the thing started falling apart. The next one did too, and then I got a new version of their latest Fitbit watch, which seemed a lot more robust. I was really into tracking daily exercise, and I started walking religiously.

Well, that watch ended up imploding. It was a band failure where it joined the case, and it was not a replaceable band, so it was time to bail on their platform. By this time, Mrs. Guitar Ted had upgraded to another Apple Watch version and her original Gen I watch was just laying around. I decided to do a side-by-side comparison of the Fitbit and Apple Watch to see which I liked better. I landed on the Apple Watch and wore it since then, as I say, a little over a year ago now.

So, when I woke up to put it on the first day of 2021, I noticed the face of it, the screen, felt odd. Was it loose? Maybe a little. Then as the morning wore on it felt worse, so I showed it to Mrs. Guitar Ted, and when she looked the whole dang face came loose! Now what? I felt a little twinge of sadness, because, well.........I had a string of days consecutive where I had achieved my goals going back to the weekend the pandemic started. Not that it was a life-or-death thing if my string was broken, but it kind of meant something to me. I have made a lot of health gains since this all started and this string of consecutive goal achievements was a motivator in that.

So, with a bit of sadness, but a resolve to make-do somehow and continue onward, I took off the watch and tried to come up with a plan to start another streak somehow. Well, then Mrs. Guitar Ted, she's a 'doer'- a problem solver, and she went to work on a plan and well..... The end result was that I got a new Apple Watch and she got my info saved and the streak is alive!

It's funny that this is a thing I got so attached to because I could give a rip about cycling computers, GPS data, Strava, or whatever the latest indoor cycling craze is. But there is something that grabbed me with these fitness watches and the Apple watch is my jam. So, this is really my only 'device' fetish, if you will. 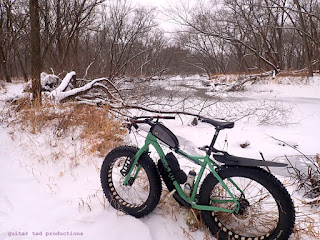 Over the weekend I had the chance to take advantage of the 5" of snow that fell and I got out on the Blackborow DS again. I love this bike when the conditions are right for it. The thing is, this bike is so capable, it takes a pretty extreme set of conditions to make it 'worthwhile' to me to ride.

The latest snow drop is on the cusp of where the Blackborow comes on and does what my other fat bikes cannot do. It has enough float and aggressive enough tires that it can plow its own path through 5-8" of fresh snow with no worries. The Blackborow can make a snow machine track rideable due to the bigger footprint where a 4" tire won't cut it. Well, actually a 4" tire does cut through. That's the problem there.

The trails are decent in the Green Belt, and actually really good in places, so I probably could have done fine with 4" tires there, but where there were places that were still soft I needed the Blackborow. So, I had fun, but unless we get more fresh snow, I probably will go back to riding the Mukluks again, because the need for almost 5" wide tires will go away again. And that's what makes me sad about owning the Blackborow DS.

It's such a great bike that leaving it sit for 10 months out of the year seems like a crime, but unless we have deep snow cover or mud, the Blackborow is simply overkill. I have thought about building up some 27.5 wheels on some fat bike hubs using wide rims that would support 27.5" X 3" tires. Then I could see this being a dinglespeed mountain bike. but that means I'd have to actually go, you know, mountain biking, and well, I didn't get much of any of that in during 2020. My thoughts are that I will be spending a lot more time riding remote gravel and dirt roads than I will be mountain biking, but who knows? Anyway......

Andy Has Another Mouth To Feed:

In some joyful news over the weekend, Andy, of Andy's Bike shop where I work, announced the birth of his second child, a daughter, born to he and his wife Samantha on January 2nd. they named the girl Stella and so the shop is closed for the first two days this week as a result.

Welcome to Stella! Congratulations to Sam and Andy!

That's the Randomonium for this time.

regarding the apple watch failure, there is an extended service program for this issue. a few months ago i had mine repaired outside of warranty because of the same issue. they will ship you a box to mail it and and typically it takes about 3 days for you to get it back. i know you already got a new one but maybe you can still use the replacement as a backup or whatever so hope this helps.

@jdee - Thanks! I'll have Mrs. Guitar Ted look into it. She's in charge of all tech devices in the household.

Wouldn't 29+ make more sense as a drop-in MTB wheelset for the Blackborow. Or are you looking to lower the BB a bit? Asking because the same thought has occurred to me for my ICT, going to 29+ or to 27.5 fat with 4" tires when I don't need as much float.

@Exhausted_Auk - Yes, I have thought about 29+ as well. The thing is, I tried that on my old Ti Muk, the one I sold off in 2019, and I did not like the high bottom bracket. So, you are right on track with my thinking there. Ultimately, a 29+ wheeled MTB type bike is really what I want, but not with the geometry of the Mukluk or Blackborow DS.

Not sure if this helps with the Blackborow decision, I have been riding Maxxis FBF 26x3.8 mounted onto a Sun Ringle Duroc 50. The height measures out to 29 inches to the top of the knobs.

@teamdarb - Thank you for that comment. I was curious as to what a 27.5" wheel might do to diameter on the Blackborow DS. That's an option I'd consider then.

I would love to jump on that new ti rando, especially with the price break. I see that even with the curved top tube and big seat post it has the exact same geometry and dimensions as the new steel one. So I would guess it would ride just as nicely or maybe better and be lighter as well. My problem is I tend to research things to death and in todays world when I finally figure out what I want,it's gone....So the more I look at it the more I like it. decisions, decisions.