Another Saturday, another beautiful day on tap. This time it was the first day of Spring as far as the marking of the Spring Equinox goes. I always figured it was acting like Spring most years long before that, and apparently the weather people think so as well. Now there is this "meteorological Spring' which they say starts March 1st. Well,, maybe that's too early, and I figure it is somewhere in between there, but they never asked for my opinion, so it is whatever it is.

At any rate, it was supposed to be near 60° and Sunny, so I was game for a ride. I went back and forth on what I wanted to do all day Friday and into Saturday morning, and in the end, an early start to Friday (4:00am) and a week's worth of bicycle wrenching had me pretty pooped out. So, I slept in instead of trying to get out before the Sun came up. That turned out okay anyway since it was about 31° in the morning and then it was supposed to zoom up about 15 degrees in the first hours of Sunlight. That's always a recipe for 'tough-to-dress-for' rides. So, I was okay to wait until the temperature stabilized.

When I looked at the possible conditions for Saturday on Friday, the forecast was for around a 20mph wind out of the Southeast. Okay, so the route plan was South then, and I didn't dial it in until I left, and that's when I decided I'd ride from Prairie Grove Park to Hickory Hills via gravel and back. Only there was one thing I didn't know....

I decided to use the Black Mountain Cycles MCD with those Kitchen Sink bars on it. Since it was pretty warm, I dressed in a long sleeved wool jersey and a vest, 3/4's pants, and long wool socks with some pretty warm (for me) standard MTB shoes for footwear. No gloves. At first, I thought it might be a mistake as the wind was stiff and that made it feel colder, but after about three miles I was fine.

I got out on Hess Road and turned East on Orange Road only to find that the wind wasn't 20-ish miles an hour. It was definitely stronger than that. But it is Spring now, whatever way you look at it, and that means wind. It wasn't worse than I would have thought for this time of year, so I plugged along.

I soon decided that this wind had revealed that I wasn't in as good of shape physically as I thought I was. I was struggling up minor grades and my speed was low. Hmmm... Oh well! That means I just had to work at this and continue to get better. It is only just starting out in Spring here. I have time, I thought, to make gains.

The roads were getting new gravel on them. Now, I don't know how the County decides to go about this job, because you'd hit patches of deep, loose gravel for a stretch then you'd run out on a short stretch of about 50 yards of hero gravel, then back to deep gravel, then a mile of hero gravel, then on and on.... Switching back and forth so you had variable conditions. From time to time, it even looked like 'normal' out there, as in my image above. Transition time in the country....... 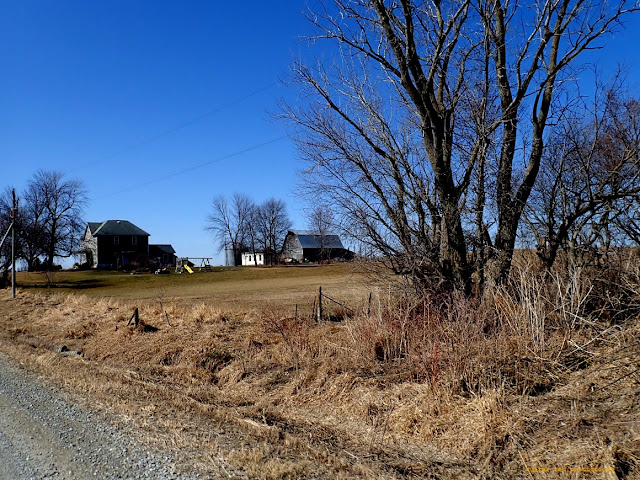 Then I started up a grade and the wind roared. I shifted down two gears, spun the best I could, and hunkered down. This wind.......it wasn't just a little over 20mph! I was working way harder than I should be. Hmm.....this was more than a fitness issue! Then it became a physical issue. Yep! I felt it as a twinge of pain in my right knee.

I was at the point I was going to turn East and make my way to Hickory Hills, but instead I stopped. My knee wasn't going to work itself out, it was only going to get worse pushing into.....hey! I have a phone with me! I decided to dig it out and see just what the heck was going on here. And when I pulled up my weather app, I was finally seeing the light. "Winds at 22mph with gust of 33mph."

Made sense immediately, and in my estimation, the "gusts" part was more consistent than not. Flags were standing straight out. And as we all know, being out in the open always adds a bit to whatever the weather apps are saying. So the decision to head back was made there.

Coming back in was brilliant! With that big wind at my back I was simply flying along and on downhills I think I was right around 30mph pretty easily. I counted one section of a mile where I pedaled maybe 20 feet of the mile. It was nuts!

I also saw some other tracks in the freshly graded surface of Beck Road, which if I had to guess, I would say it was Tom. He lives nearer to the Southern gravel in Black Hawk County, so I know he's out there a lot. But it could have been someone else. You never know.....

As I have stated here recently, it is so dry out there in the country that it is incredible for early in the year. The roads are sooooo dusty! I feared earlier that it was so bad that the road beds would start breaking down into moon dust, and on my ride Saturday I saw evidence of that happening. Now the County is laying down new gravel, but without some rain soon we will be in trouble.

Fortunately those rains are forecast for today and tomorrow. Hopefully that pans out and we'll be getting some support from moisture to keep the roads together for a bit. Of course, Spring plants and animals will be needing that moisture as well. I really hope that they get it too.

Greening up is happening. Soon the countryside will be festooned in green everywhere and farmers will start tilling fields. Another season of growth is kicking into gear......