Last weekend there was a 'virtual contest' in regard to the Mid-South event. We, (meaning myself and N.Y. Roll) tried to get the C.O.G. 100 v2 course on their radar as an 'official' route, and we even submitted it, but they must have deemed it not worthy since it was never put on as an 'officially recognized route' for their contest. Whatevs......

We tried at least. But maybe it is better off that it wasn't on their radar. Why? Because it is a really hard course. Just ask Tom and N.Y. Roll who attempted it last weekend. They made it 87 miles before throwing in the towel. Apparently, a soupy Level B Maintenance road was partially to blame there. (Note- There was only one of those adding up to about two miles of the entire course. )

Of course, being a route that I devised, the hills are in abundant supply. It isn't hard to find those in Jasper County, by the way, so don't go congratulating me on me route finding. Besides, I'd run Trans Iowa through here many years, not to mention a few Guitar Ted Death Rides and a Geezer Ride. So I know the area like the back of my hand. That said, you have to know how to string together the right roads to get a lot of elevation. In those 87 miles that N.Y. Roll and Tom accomplished they climbed 6700 feet, so there is not much relief there. Check out that image to the left. That's Tom circled in red at the bottom of a valley. You can refer to him and see how long and steep the hills get out there.That image is courtesy of N.Y. Roll, by the way.

The course was made public at one point so if you grabbed the route you now have a bit of reference material to guide you. (Note- Don't ask me for the route. I typically don't make my routes public. You missed it? Don't ask me for it now. It's out there......somewhere....) I'll be trying this course at some point (hopefully) this year as well. I've actually ridden a big chunk of it by bicycle at one point or another, so I know what to expect, but this report from N.Y. Roll and Tom should be noted if you have the route and are going to attempt this. 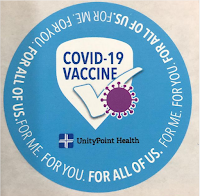 What A Difference A Year Makes;

One year ago about right now we were all descending into the unknown of COVID-19. I don't have to remind you all what that was like. But one thing was clear- no one knew how it was going to end at this time last year. And maybe the fear of the unknowns- the virus, how it was all going to unfold- was the worst part.

Well, now it all looks a bit different a year later. Now we have a 'light' of sorts at the end of a tunnel. There seems to be a point where - yes - this will all pass. Vaccine roll-out is ongoing and very hopeful outlooks say that by mid-Summer we'll all be doing things much like we had been before the whole mess started a year ago.

I'm not 100% sold on that rosy outlook, but I will say that I am feeling a lot more hopeful than I have been in a long while for an end of this thing to be happening. I also feel a lot better personally since Monday I was able to avail myself of an opportunity to get my first of two vaccination shots. My son did as well. This means that after the first week in April my whole immediate family will have been vaccinated. That's a relief, I'll tell ya that much. I am also very hopeful that you all reading this will be able to say the same, if you haven't already been vaccinated, soon.

What an accomplishment by scientists and the health care system. In less than a year we went from fear and anxiety to having hope that things are ending for this pandemic. I suspect that this will have a big effect on events and social interactions going forward.

I was talking with my neighbor the other day, who is single now after a divorce. He was hoping to get his vaccination soon so he could put out on social media that he was a good guy, had his 'shots' and was house trained. Ha ha! What weird time we live in!

So, supposedly those sneaky Swiss guys made some 240 level hubs in that oh-so-popular 'oil slick' anodization that is all the rage amongst the MTB crowd now. They only made 1000 pieces worldwide and only official DT Swiss dealers were able to get them. According to at least one of those dealers, this was an unannounced opportunity and the hubs sold out in minutes.

Comments: So oil slick ano is a big deal now. It's a fashion thing, of course, and nothing more. This too shall pass, just like all ano color phases have. Purple had its day, turquoise, pink, and on and on. "Oil slick" is just the latest to make a splash. I think we can kind of blame SRAM for this as they started manufacturing some oil slick looking bits when Eagle came out several years ago now.

I find the concept odd. Especially the name- 'oil slick'. That was a bad thing at one time and the term represented the worst of our society's dependence upon petroleum based products. An 'oil slick' was, and still is, one of an environmentalist's worst nightmares. And here the supposedly 'green' bicycle industry is producing a product that riders are scrambling for the chance to buy-  A component anodized in a color with a name that somewhat celebrates the idea of pollution?

Apparently this oil slick thing is most popular with the mountain biking set since DT Swiss only did the hubs for Boost spaced bikes, which, at least for now, is within the realm of mountain biking. Which makes it even odder since mountain biking is traditionally tied to green, environmentally sound practices, in general. UPDATE: Okay, maybe not just MTB. State Bicycle just dropped a handlebar, seat post, stem, and water bottle cage in 'oil slick'. They are more of an urban/fixed gear company with a gravel option, so there's that. 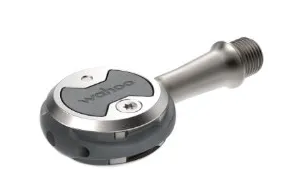 Speedplay pedals have been around for years. I first became aware of the brand in the mid-1990's when a coworker of mine bought a set for mountain biking. Since that time the brand, a family owned business, made a lot of inroads into the road biking market where they arguably carved out a niche and their users became loyal fans of the brand over the ensuing years.

But hard times hit and Speedplay eventually was sold to Wahoo Fitness who have now revived the brand. Now you can get the pedals which are a sort of reverse orientation from every other design again. Speedplay uses the pedal as the 'cleat' and the spring mechanism goes on your shoes. so it is quite a bit different than most 'clipless' pedals on the market.

Nothing shows up on the site in regard to a mountain bike specific design, or the pedal that Speedplay had made for gravel, the SYZR, although Speedplay had a design out which they had released shortly before the company was sold. Reports were that design was somewhat problematic and so perhaps it has been withdrawn within the Wahoo Fitness Speedplay range. Whether or not that type of pedal will surface again is not known at this point.

Comments: I suppose you could use the Speedplay pedal for gravel, but that 'cleat' on the shoe, even with the walkable 'protector' thingie, ah....... I wouldn't recommend it. But I've seen folks using straight up roadie pedals on rough gravel before, so.... I just don't think it is good for the life of the cleat and it's undoubtedly harder to walk on gravel- if you have to- with roadie cleats and flat bottomed, stiff road shoes. But not everyone's idea of 'gravel' is the same, so I cannot speak for everyone there.

That's a wrap for this week! Get out and ride if you can!

Speedplay make a Pave version of their pedals that better handles dirt and grime getting into the cleat but they are very expensive.

I know it goes without saying, but your routes are always the bees knees GT. We were both spanked at that 87 mile mark. Great roads, great scenery, and great times. I’m very thankful I caught the tail end of your event days.

@Tomcat - Thank you! Happy Friday to you as well.

The sale of Speedplay caught me unawares. We have over a dozen sets of their Frog pedals between various bikes. I have been using them for 25 years, and while they have their quirks, I love them for their simplicity, ease of exit and near limitless float. It is looking like that pedal, and the unique cleat that goes with it, is now out of production. Cleats, even used ones, are listing on eBay for silly money.

BMX went through an oil slick phase years ago. This would have pre-dated anything from an Eagle drivetrain so I don't think you can blame SRAM. The BMX oil slick fad has showed up in MTB from time to time. It is a bit of a surprising offering from DT Swiss.