The drive back to Grinnell was taking forever, as I recall. I suppose two-plus hours on Iowa two-lane roads in a truck alone isn't what anyone might call 'fun', so what's new, right? But I suppose it was compounded by MG and I sitting around all afternoon already. I was certainly ready for a change in scenery and some interaction with whomever might show up at Lonski's for the impromptu after-party for T.I.v11.

I'll never forget walking into the place and hearing the cheers go up when the assembled riders saw me. I was heartened and encouraged, for sure. I was also very humbled and I was quite conscious of the fact that most of these riders had invested months and months of planning and training to only see it washed away in the first four hours of Trans Iowa. Had I been met with pitchforks and pikes instead I totally would have gotten it. But that wasn't the case. I was walking into a hero's welcome. It was, frankly, quite an unexpected and confounding experience for me.

But no time for pondering the reasoning behind the obviously exuberant welcome. A chair was pointed to where I was to be sat, and rounds of whisky shots were ordered and sat before me. Toasts were made. Hearty proclamations and accolades were spoken. Then it was time to reflect a bit on the day's happenings. I was then able to have some meaningful conversation with several riders. I will always treasure that I had that opportunity.

Typically I might have a quick word or two with riders as they attended the Pre-Race Meat-Up. Maybe 30 seconds of 'how ya been doin'' type chit-chat. I may even have had a five to ten minute chat with a few of the riders at the end- if they finished- and that would be it. People disappeared and went home. There were few 'good-byes' at any Trans Iowa. Most people that attended Trans Iowa were like ghosts to me. They appeared out of nowhere and faded back into the mists of time. But this gathering was different in that respect.

I was most satisfied with the fact that I was able to sit down and share a beer with the two riders that came from Germany, Gerald Heib and Ralf Stormer. They had been to Trans Iowa v10 as well, so having made two cross-Atlantic trips just to come to Trans Iowa? I was and always will be floored by that, as well as the commitments made by a few others from the U.K. who also made the leap over 'The Pond' to attend this event. But at this point, getting to know Ralf and Gerald a tiny bit was just so amazing for me. I am forever grateful for that chance.

Of course, there was a duty to perform as well. I had to hand out tires. I had cases of WTB gravel tires and I remember walking through the restaurant handing out pairs to every Trans Iowa participant that I could find. There were other Trans Iowa riders at Lonski's not seated at the table I was at. They were either sitting in smaller groups or having dinner with support people. Among those were Tim Ek and Amy, his partner in life. Tim kept saying this thing to me. Everytime I passed his booth, he'd reach out and stop me and say the same thing.....

"Trans Iowa is bigger than you. Don't forget that." 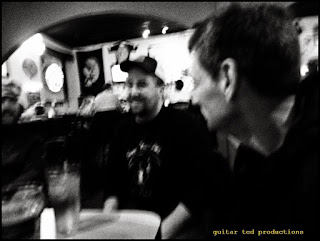 I guess I never really quite understood the urgency with which Tim made that statement. Maybe he was sensitive to the feeling I had that v11 was a failure of sorts. I suppose he could have been trying to impart to me that I should never think that Trans Iowa was centered on me, that it was a 'thing', a movement, a spirit, that no one person embodied.  And maybe I found it odd because that was what I always had thought about the event. Or maybe I just never really understood what he meant by that. I can't be sure. It was the last time I ever spoke with Tim. I just recall that being a very odd statement and it has always stuck with me ever since.

As with all things in this Life that end, our time at Lonski's also had to end. I remember stepping outside with my brother in Life, my good friend, MG, who only a few years earlier was at odds with me at the end of another Trans Iowa. We looked into each others eyes, knowing without words that we had both just walked out of a once in a lifetime experience. The smiles were all it took to convey our deeply felt feelings about that evening. With a few words, we parted ways, and I climbed back into that truck of mine one last time to make one last trip for Trans Iowa v11. The long, lonely trip back home.

The event was a failure. The event was a rousing success never to be repeated. That's how it often is with things. It all depends upon your perspective. I doubt that anyone there at Lonski's that evening would have traded that day for anything. I know I wouldn't have. But there were people who called me, and Trans Iowa, out for being a waste of people's time. I should have cancelled, postponed, or made a way for all those people's time and energies that had been invested to have paid off somehow. The 'somehow' being a traditional finish of the event, obviously. But those people did not understand Trans Iowa at all. I knew that. So, I didn't pay much attention to those voices, but they were loud, and they were out there.

I did have motivation though. Not to change Trans Iowa, but to allow for another chance by putting on another one. Looking back, Trans Iowa v11 was the last Trans Iowa to be truncated. I'd had four years previous where Trans Iowa had run it's full length and time. Only v2, v4, v6, and v11 were shortened. You'll have that in Spring in Iowa. Looking back, it was all good. In fact, people often said to me that it wasn't a 'real Trans Iowa' unless it had been a shortened one, or if the weather wasn't gnarly. So, the people that came expected a certain experience. If they didn't get it, they were, in an odd way, somewhat put out. The next Trans Iowa after v11 being a perfect example of this.

Greg Gleason became something of a folk hero after this event. The fact that no one but him made the first checkpoint was a story that many found amazing. It was, in fact, very amazing. But in the end, it was a doomed effort. No one finished T.I.v11. One of only two times that ever happened. Some say Greg 'won' the event, (including Greg), and even my results page on the Trans Iowa History site says "we declared him "the winner"", because we wanted to honor his efforts, but officially? No. It was a no-finisher year.

NOTE: A special "Thank You" to Trans Iowa vet and Slender Fungus member, Ari Andonopoulous for sharing the two color images in this post with me which I had never seen until March of 2021.

Next: It's About The People: Part 2

I´ll never forget this evening. It was a very special and mystical evening.
And for the first time I had Iowa Whiskey....

@ gerrireggi (Gerald)- Thanks so much- again- for making those two times I was able to be with you possible. I know that it took a lot of effort, planning, and money to get yourself and Ralf over here and back again twice.

I am still amazed by this and by others from the U.K. who made the efforts to get to Trans Iowa.

Ari keeps me up to date on your communications with him. I so appreciate that this friendship lives on. All the best to you and Ralf!

That was such a memorable evening! I’m so happy to have all of you as friends. Ari

I’m so fortunate to have been there, Brother... it was a surprising end to an overall very challenging weekend. Like Ari, I too am so blessed and happy to have you all as friends.

Thanks for telling that story. It’s a good one.

Hi,
A lot of money, indeed, but the experience is worth every cent.
And, as with every event, preparation is half of the event.
TI V10 and TI V11 was in my head for two years of my life with so many gravel- rides in trainings and choosing material and clothes.....reading GT- posts....

And nowadays it is still there- not so present of course.

After that morning of 85 k TI V11, emotions went up and down. It was good to meet the members of slender fungus in the cafe and afterwards at Lonski´s.

Lots of talking and in the end with you Mark, makes me understand that it is not the man, who decides wheather to finish an event...

Then Sunday morning ride with slender fungus out on perfect dry gravel roads with no clouds.

One year after that I rode Tuscany Trail in italy and a heavy thunderstorm rise up meanwhile the pre-race meeting.

Lot´s of rain during the next three days.
Will it be the same as last year?
But at least I could finish and the lion looks friendly this time: