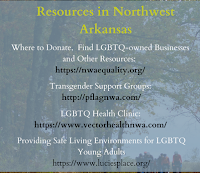 If you hadn't noticed, there is a big issue regarding the proposed World Cup level event for cyclo cross in Arkansas this Fall and how that state has passed some anti-transgender legislation. Social issues are being leveraged against the organizer, USAC, to influence that organization to pull the event from the state of Arkansas. Many athletes who planned on attending the event have cancelled their plans in light of the new legislation and their support for LGBTQ+ issues.

A "Bicycle Retailer and Industry News" article has more details and links for further reading here.

There have also been calls to boycott Arkansas based cycling companies and I even saw a lob at the Unbound Gravel event, since Kansas is also considering similar anti-transgender legislation. So, this is where the big gravel events are getting drug into this conversation, and why when I got an e-mail from the Arkansas based event, Big Sugar NWA, that the image posted here was front and center in that e-mail.

Comments: I expect that if Kansas does pass this sort of legislation, we can expect to see more leverage brought to bear upon the Unbound Gravel event, as well as any other 'big' gravel events with corporate backing. Let's face it, if you are after social change and want to make an impact you are not going after the little events. The aim that I see is that the events that stand a chance to be hurt economically, if they are tagged with the 'boycott', are the events that will be used to bring a light to what the people behind these issues want.

I took a look at the Arkansas laws and I feel they are really dumb and based out of fear. There shouldn't be anything like them on the books. I also think 'boycotting'  events is not all that effective in making change in this area either. But this does shine a light, for sure. I mean look- I'm writing about it, as are many others, so it is effective in that, at least. So, corporate gravel events, and obviously cyclo cross events, can be credited with engendering at least that much activity in this socially charged issue. Plus there are the things listed in the image, which Big Sugar NWA is undertaking for their event. So, I guess there is that..... But the average citizens who vote in Arkansas? Hmm...... I dunno about that.

Cracking Down On Speed:

It looks as though Iowa may be limiting any HPC rig to 20mph speed limits. The amendment to the law was recently passed by the Iowa Senate and is going back to the House of Representatives for approval. This hasn't taken effect yet, but there are no indications that it will not be passed into law.

So? Is this a big deal? Maybe...... Many so-called "Class 3 e-bikes" are pedal assisted up to 28mph. Other classes of HPC rigs are limited to 20mph already, excepting the "Class 4" category, which can go faster than 28mph and requires a license and registration. All is 'good in the hood', right? Just follow the laws and we'll all get along just fine. Except when people don't follow the laws, and they don't.......a lot!

Example: Just the other day at Andy's Bike Shop, where I work, a customer was in telling of a friend's electrified Schwinn Sierra which could hit top speeds in excess of 30mph. Not pedal assisted, of course, because what would be the point in that? (And yes- there may have been a bit of a 'fish story' element to that, but still...)

Another example; We had a guy in last year who owns an old klunker 26"er with a gas engine conversion which he claims can go 55mph and he pretty much rides it wherever he wants, bike paths included. I've seen another one like it around as well. (Note- I do not distinguish between motor types- gas, electric, whatever. If they have pedals and a motor, they qualify. They all are HPC's which is Hybrid Powered Cycles if you are wondering) There are more examples which are not modified that are all over the internet for sale and can go in excess of the so-called 28 mph limits.

So, 20mph limit? Sounds fine to me, but no one is cracking down on what is already out there AND is illegal, so what makes anyone think that a speed limit law is enforceable? It is not enforceable. The manpower required to enforce such speed limits doesn't exist, and you know, we do such a great job cracking down on speeding cars too. Yeah..........

So this 'law' is malarkey. Doesn't mean anything, just like those "class" regulations of HPC's are meaningless. It's the Wild, Wild, West out there when it comes to these things, and I am afraid nothing is going to happen until people start getting hurt, suing, and/or dying.

Exercise Helps- So Why Aren't We Pushing The Message?

I think many of us that are fans of cycling kind of 'get this' already, but more studies are being undertaken which are pointing to physical inactivity as being associated with a much higher risk of hospitalization and death due to COVID-19.

At RidingGravel.com, we were honored to have a contribution from 80 year old gravel rider (!) John Ingham with a message and references given which also pointed to similar conclusions. (Read that here) So, seeing that consistency in data, I am thinking that if you are pedaling, or exercising on a regular basis, you are doing 'it' right, in terms of disease prevention and minimizing risks with respect to diseases and mental health issues.

So, it baffles me, and it saddens me as to why our government and why our policy makers are not prioritizing some simple measures by enabling folks to - you know - exercise regularly in safe places where being mowed down by motorists piloting plastic, steel, and rubber cages at ridiculous speeds is not a fear and an issue. Not to mention making exercise a priority to help fight the ever growing healthcare issues this country faces.

I dunno.......maybe I'm the crazy one here. But it seems to me that this is so easy to understand that it flies right over most people's heads. Am I wrong? With what I see going on around me, I have to wonder if I'm not from another planet. The disconnect I see surrounding the issues of health seem astounding to me.

The ultra-distance gravel event that took its cues from the event I used to put on, Trans Iowa, happens this weekend out of the Winterset, Iowa area. Iowa Wind And Rock is a 300+ mile, cue sheet navigated, time limited event that takes in some of the gnarliest roads in South Central Iowa.

This would make the third edition of this event. Last year's COVID-modified and postponed event happened in October, and was run in conjunction with the Spotted Horse event, which I volunteered for. This date is the 'traditional' date for such an event in Iowa though.

I just wanted to take a moment here and wish all the riders, volunteers, and organizers of Iowa Wind And Rock a safe, fun, and successful event. I hope all travel associated with the event is safe, and that nothing is left afterward but epic memories and stories that will be told.

Lots of people knew it was going to happen, but yesterday SRAM finally let everyone know- and see - the new Rival version of its wireless AXS shifting group. You've probably already have seen this blasted around the internet yesterday, so I won't bore you with all the fine details.

Comments: My first impressions were that this is the BEST looking SRAM road group ever. The shift levers look almost Shimano-like. (Probably not a mistake there) The crank looks a lot less like a department store level bike crankset  than some of their other offerings. Okay, so aesthetically, good. Very good.

I did get the press release yesterday which was on the day it was released for public consumption. So, I have only had a brief moment or two to browse the 34 page FAQ (!) besides the other marketing hoo-ha that came along with it. I found that the reason the levers look so good is because SRAM deleted the 'contact feature' (I assume pad contact adjustment) and the remote shifter capabilities. This FAQ also stated that no- Force and Red will not have these sleeker, nicer looking levers. There are no plans to do that with Red or Force levers at this time.You Red and Force users are stuck with those ugly, clunky levers for the near future, at least.

There are also a few other surprises that I came across. Did you know that you have to use 12 speed compatible chain tools and chain checkers with SRAM flat top chains? (Yes- SRAM says don't try any other tools or else!) Also, Eagle and AXS flat top chains? Not cross compatible. 12 speed quick links? One time use only. And don't you ever spray your AXS equipped bike with water to clean it. Says so right in the FAQ. (But of course, people will do this)

It's a lot of reading, but I'll get through it soon. Oh, and if you want this group they say it'll be available this month. Complete set ups are around $1600.00. Good luck getting your hands on a group. My guess is that these will go like hotcakes and be on back order for a long while. Maybe I'm wrong about that, but maybe not......

More soon after I've digested all this techno-babble......

That's all for this edition of the FN&V. Have a fantastic weekend.

Gonna say it, I really wish SRAM would just release a Mullet groupset. Maybe I am searching incorrectly, but I cna not find a reasonably priced set yet. Buying the groupset piece meal or as a build your groupset from a webpage, it is not viable option for the pocket book. Yes, I love 1x drivetrains, and I will accept all the crtizisms. 2x and 3x are fashion, not function. 1X is function.

@N.Y. Roll - That was something the FAQ addressed. It basically said you could use an AXS Eagle chain,derailleur, and cassette with the Rival shifter and 1X crank. 2X is not compatible with Eagle, so even if you wanted to, you couldn't, according to SRAM.

In my view, the only advantage there is that you could have maybe a bigger drive ring and drop bars with a 'mullet' set up, otherwise, just go full-on Eagle AXS.

Ebike subreddits are full of posts about how to reset ebikes to go faster than 28mph or where to buy bigger motors. And those gas powered clunkers are a scourge where I live.

I have no problem without outlawing Class III bikes, though I agree it's unenforceable. I suppose they could make the sale of them illegal - that might slow down the proliferation.