I came across an article about the "Ten Best Single Speed/Fixed Gear Bikes" on a UK based website recently and one of their choices was this Bombtrack Arise single speed gravel bike.

Well, it is steel, and single speed, so at least that part was right! Ha ha! You all know I have a big soft spot for single speed or fixed gear bikes that can do gravel roads. So, I checked it out, and you know what? It is something I would buy. But I really do not need it! So, no.... You won't see this bike in my posts in the future, but if I was in the market for a single speed gravel rig, this bike ticks all the boxes for me in terms of geometry.

I would want a bit lower bottom bracket if I had my druthers, but otherwise? This is good. It's not "great" though. It is heavy-ish, the parts are pretty pedestrian, and the tire limit is 42mm. But you get spoke holders! Who does that anymore? It's also kinda expensive for a single speed, but any brand's single speed bikes tend to be, in my opinion, overpriced for what they are. Bombtrack is no exception.

Anyway, it isn't often I find a bike that is mostly agreeable with me and single speed to boot. I just thought you all might find it interesting as well.

In an announcement last week made by new wheel and component company, Logos, I learned that the old proprietary Star Ratchet design is now an open standard. Patents are weird things, but yeah, you only hold them for so long before the design is an "open standard" useable by anyone. I guess as long as the design isn't purchased by someone and held, (see Shimano), then things are different.

I remember using a wheel set back in the 1990's with a Hugi free hub and it was very noticeably better than pawl/spring designs most often used then, and still to this day. Hugi used a two spring design, but when DT Swiss bought the design they went to a single spring. The advantage of using two springs is that when the hub is under torque, and the chain is basically trying to rip the free hub body off the hub shell sideways, a typical pawl/spring design will be under the possibility of 'skipping' due to distortion of the materials. The ratchet design helps eliminate the need for concentricity and therefore escapes the dreaded pawl skipping possibilities. A dual sprung design essentially is floating, which is even better in that regard.

So, I was a bit surprised to see this design in another brand's hub that wasn't a licensed design from DT Swiss. This makes me wonder, will we be seeing more companies switching to this star ratchet design now? If it is demonstrably better than a pawl/spring design, I think the answer is "Yes".

My 2015 Salsa Cycles Mukluk is in need of a new bottom bracket, (UPDATE: It's been fixed! I'll have more on that next week)  so I went a-searchin' fer one. Then I came across these colors on Wheels Manufacturing's site and was surprised. I didn't know that they were offering anodized components.

I've had good experiences with Wheels Manufacturing bottom brackets and I have used a few in my bicycles with good success. They are reasonably priced, durable, and get the job done. I especially have liked their screw-together, Press-Fit style bottom brackets, one of which I just installed in my Twin Six Standard Rando v2.

So, if you are looking for an anodized color and need a bottom bracket, check those out. By the way, I am not being paid, nor bribed for this recommendation. I buy my bottom brackets just like you would, at retail. So, just a friendly recommendation here. 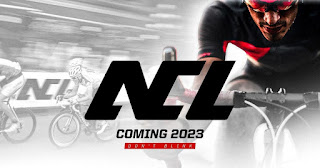 A new criterium based league and series has been announced which will take its first start in 2023 in Miami, Florida. The league will be minority owned and run. The league will be made up of teams which will travel the country to its biggest cities to contest its events. A modest schedule has been announced but in coming years this could expand to include upwards of 20+ cities on the tour.

There will be equality in pay between men and women participating and these "teams" which will make up the series will be co-ed. The races will have separate events for men and women, but riders will accumulate points and teams will blend their accumulated men's race and women's race points to determine which co-ed teams will take home the prizes.

A virtual component will also be a part of the series where fans can obtain data generated by the athletes and also participate virtually via a Zwift-type interface.

An excellent story about the series with more details can be read from the "Miami Herald" online for free here.

Comments: Older roadies may remember something like this from back in the 80's-90's. (The linked article talks about this) There have been other national criterium series as well as local and regional series which have found some success. This new venture seems a bit more focused on the "team" aspect and on tech. It'll be interesting to see how this holds up against the USAC sanctioned criteriums.

With the saturation level of 'gravel events' being at an all-time high, it might be a good time for "something different" to find a foothold. Especially in bigger urban areas where actual gravel roads and back roads are rare and hard to find.

Today and tomorrow are the dates for the Gravel Worlds events. This year the event took on the challenge of getting 1000 women there to ride, (challenge met) and have raised awareness and increased participation for marginalized people in several groups.

A running component was also added with a tie-in to Mid-South's running event. All this will be over by Saturday evening. It will be the largest Gravel Worlds that has been held since the event started in 2010.

Comments: First of all: I hope that everyone involved with Gravel Worlds has a great time. I hope all are safe traveling to and from the event, and during the event I hope all stay safe and whole. All the best to the riders, and the promoters, who have toiled and put in untold hours to participate in and create this happening. Most of all- Thanks to anyone volunteering. I get it- I used to put on events like this and they do not work without volunteers.

And no- I am not going to be there for the first time since 2015, excluding the pandemic year of 2020 when the event wasn't held in Lincoln.  I also have ridden in the inaugural Gravel Worlds and one other year as well. That's a long, long run, and I needed a break. Not to mention the fact that due to my job changing again for the second time in two years which has stressed finances to the limit. So either way- I wasn't going to be able to attend.

I'll miss seeing everyone. But that's the way of it sometimes. Ride on Pirates!

That's a wrap for this week! Have a great weekend and thanks for reading Guitar Ted Productions!

Gravel Worlds just won't be the same without you there, Brother. Your presence will be missed!!

@MG - Thanks Brother! Love ya!

Looking for your thoughts, opinion and expertise as a mechanic on the Wheel Manufacturing angular contact bearing bottom bracket. I replaced one, red ano by the way, on my gen 2 Fargo which came with an X-5 Sram triple crank on the original build and really liked that BB, but due to very bad knees I had to replace that crank because those 175 mm crank arms were killing me. So on a closeout deal from Jenson's, I acquired an older very nice Race Face Atlas triple crank with 165mm arms that pretty much solved the knee problem. Naturally I had to replace the BB and due to finances at the time I went with a Shimano Saint which has been a good bottom bracket also. Getting time to replace again. This is where your opinion comes in. What do you think about the different properties between angular contact or straight up roller bearings and are they more efficient, sturdier, longer lasting and worth the extra bit of money?
baric....

Past history would seem to agree with this as all engineering and physics done for bicycle design in the late 19th Century/early 20th Century led to the nearly universal acceptance of angular contact style/serviceable bottom brackets.

Shimano studied all the early engineering, physics, and early patents and have dedicated themselves to angular contact bearings.

Based upon the evidence, I'd go with angular contact bearings whenever possible.