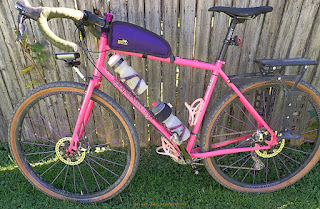 Back in late July I had made plans for an overnight gravel grind with my Black Mountain Cycles MCD and this rack I am testing for RidingGravel.com. I had everything ready to go. I had one week that would work for this trip. I had two opportunities that week to make a go of it, and wouldn't you know? Both times got taken out by unexpected responsibilities that took precedence over going on some gravel journey.

That's life sometimes. Since then, my schedule has been so broken up into small bits of free time that I haven't been able to piece together a slot where an overnight trip would work out. And now it's October and time is running out for 2022.

So, I figured that since things didn't look to be changing with regard to my schedule anytime soon, nor did my responsibilities seem to be clearing up, I have to regroup and see what is actually possible. That would be an out-and-back "coffee in the woods" type of ride where I use this rack to haul out a picnic and stuff to make coffee.

Okay, but that meant that I needed to test my penny stove out. So, I got my camp kit out, some alternative fuels, and decided to have a go at this in the back yard. The results were 'spectacular'.

I cannot remember when or where I got this all titanium cook kit from, but it is branded "Toaks" and it seems to be pretty sweet for a minimalist kit. I only had to add my handmade from a beer can "penny stove", fuel, and fire source.

The cup has fold-out handles and the spork is a folder too. It's all super-light in weight and obviously pretty durable. Now the system is supposed to work with thiose fire-brick doodads that you can get to use with some stoves, but I decided to use the more commonly sourced white gas fuel based stove idea which can run on various fuel sources. You may have heard about the "penny stove" idea, it is a cheap way to go and works a trick. Plus, the beer can stove I made weighs next to nothing. Actually, it might be a Coca Cola can.....whatever. It works. 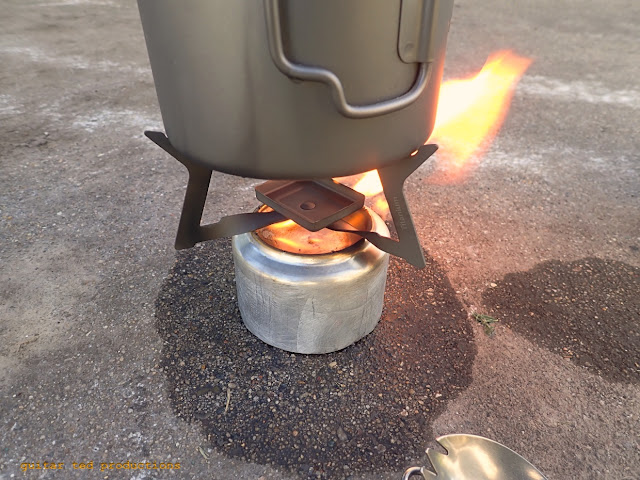 So, here's a look at the stove set up in action, and admittedly, its a bit of a kludge with that Titanium stand meant for a brick of fuel. The stand folds up nicely though, and since I have it, I'm trying to make it work. More on the whole stove/stand thing in a minute.

First I wanted to share what I had going on for fuel here. This may sound a bit nuts, but I thought, "Why not try it?", and I went for it anyway. Here's my thought process: The pandemic made it so that hand sanitizer is everywhere, and now that we really don't use the stuff again, I've noted several places that have it sitting around their entry ways, on counters, or even for free in small sample sized containers. The stuff obviously is loaded with alcohol, so...... Hmmmm...

I poured a bunch I had into the stove and lit it. The flame was weak and what's even more alarming, the flame was invisible. Duh! Alcohol burns that way, right? The hand sanitizer was off-gassing alcohol and that was all that was burning. Hmm.... No good!

Well, I didn't have any white gas, but I did have a ton of charcoal starting fluid, so.... I put some in the penny stove, lit that sucker up, and boom! We had fire alright. Too much fire! I threw the windshield around the stove as best I could, and that concentrated the heat better. But that sanitizer stuff mixed with lighter fluid?

I had a blaze going in a rage for at least five minutes. It was a bit surprising and I was concerned that things were getting out of hand for a bit there, but eventually it calmed down.

So, success, but a measured success. I have to make a couple mods which I think might be conducive to a better, safer experience. One- That windshield needs to go on before I light the fire. I can get that thing on there so it will leave barely any space between the base and the cup on the stand.

Secondly, I can shorten up my penny stove a bit, which would bring the cup down into the windshield more. Also- I've tried using the stand upside down, but my penny stove is jussssst too big to fit between the legs of the stand. But that would be a good set up if it worked.

And, of course, I'll get some proper white gas for the next time! Otherwise even with this bodged set up I could have made coffee, if I didn't burn down the forest first! The water did actually boil, so there ya go!

Anyway, there is my pyrotechnical side on display! I'll hopefully have used this set up soon and I will report again on how it all went. Stay tuned....

You did well enough. High five!

I think you already have a winning combo if you just resize the windshield to fit the diameter of the pot stand feet but use the shield upside down...the vent holes on the bottom. That cube plate middle of the stand is probably helping distribute an even heat source to the pot. As far as the fuel source...check the alcohol percentage. I will not use it. Shocker the price of denatured alcohol and white gas (camp fuel), if you can find it in a pint, is crazy expensive. I have been using coal and wood this season.

Haha I love it, even though I'm not sure Hikin' Jim (https://adventuresinstoving.blogspot.com/) would approve!