We had another snow storm last week that was quite unusual for a January snow storm. In fact, it felt a lot more like something that would have occurred late in February, or even better- early in March. A snowstorm which occurred at the freezing mark for temperatures.

January has been atypically warmer than usual. Not by a lot, maybe more December-ish than it would be on a typical year. Nothing crazy like we've seen for short moments during past Januarys where it has been in the 50's for a day or two max, then it goes back to under zero or near to that with below zero nights for weeks.

Last week it had been so warm everyday that almost every iota of snow we had was melted and gone. Then the weather folks were ballyhooing this big snow event with "six to ten inches of snow' which was to fall overnight Wednesday into Thursday. It snowed alright, but only maybe four inches of thick, heavy snow which, due to the high temperatures it fell at, stuck to every tree, wire, and pole it hit.

This left behind a "Winter Wonderland" effect where every branch on every branching thing was coated with a thick covering of snow. Since there was little to no wind associated with the storm, or its aftermath, this stayed in effect for more than a few hours. Typically when we see this sort of thing it is gone right away the same day. That I could wait until Friday, when it was colder and the snow had set up to ride, was a big-time luxury. 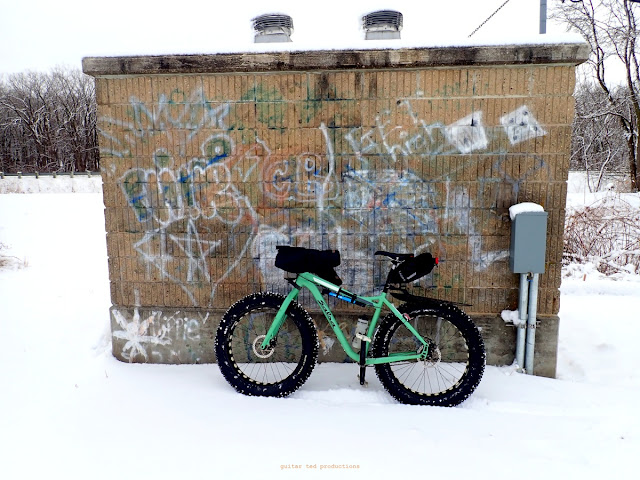 It was colder than it had been, but not bad. 20 degrees is fine for riding fat bikes, and due to the high moisture content of the snow we got, it was easily rideable even without grooming. That said, anywhere there had been compaction it made the snow as fast, or maybe faster on a fat bike, than pavement. It was fun yet still a challenge.

I plunked and trundled along for a bit longer than an hour. Got my heart rate way up there a couple of times! It was fun to actually have fat biking in great snow as opposed to the last snow we had which was all drifted in snow. That stuff is like riding through hour glass sand. No consistency or stability to that sort of snow. This high-moisture content snow is far more fun on a fat bike.

This might stick around for a while as well since it is not supposed to get too warm for a while. I doubt the "frosting" will stay once the Sun reappears for any stretch of time, but this was a lot of fun to ride through and experience for me. Like I said, this is rare here and this probably won't happen again anytime soon.

I bet that blackborow DS provided a nice workout! I took my SS ice cream truck out this past weekend and it doesn't take much to burn up all your matches on it lol. I don't think i'd find pleasure riding it year-round, but 2-3 months is just the right amount to appreciate some of the more nimble rigs in my stable.

@Tomcat - Yeah, spinny-spin-spin! I commuted an entire Winter on that bike when I worked at Europa and I found that the following Spring that my cadence and form was much improved over the previous years. So, I think of the Blackborow as a "trainer with a view"!