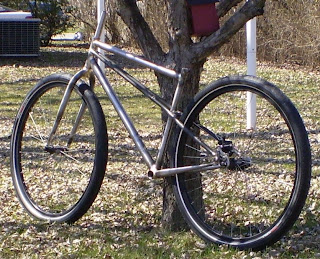 This is a design I have had sketched out since about 2003 or so. I mentioned it to Ben Witt of Milltown Cycles and he worked out the design on his Bike Cad program. Once the details had been worked out, Ben thought it was a project worth pursuing. So, it went into production. 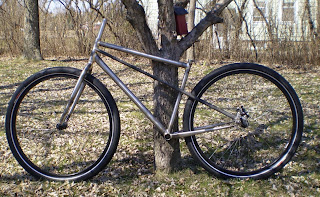 The builder Ben used is the same guy that built Ben's 36"er last winter. Mike Pofahl is his name. This frame is right up his alley, I hear, because it's so much like a tandem in certain respects, which is something Mike has done some of in the past.

Anyway, it's fillet brazed out of a standard 29"er tube set with the addition of the long twin laterals that are massaged a bit in the area of the rear tire/seat tube, which you might be able to detect in the first photo.

The idea that I had was to get some vertical compliance at the rear wheel. Not a lot, but something to take the edge off. The twin laterals are there to go with my theme of a "mtb heritage" design. I'm trying to emulate a bit of that early mtb pioneering flair with the addition of modern innovations like 1 1/8th headtube/ threadless steerer, disc brakes, and 29 inch wheels. The twin laterals form a sort of "cruiser-esque" front triangle, which is also echoed in the choice of a single speed drive train.

The frame was shown to a friend of Ben's after it was completed to the point that you see here. This individual was one of the original Marin clunker guys that rode with Fisher, Breeze, Guy, et all. He took one look at this bike and reportedly said, "That there is Breezer 1979!" So, I guess my "heritage" goal was met! Then Ben and this fellow decided that it must have a Bull Moose type handle bar, so I guess that's in the works. I was thinking drop bar, but hey! Bull Moose with a modern twist? Yeah, I can see that.

The hope is that this will be ready for the Big Wheeled Ballyhoo, so if you make it up for that, this should be on display.
Posted by Guitar Ted at 5:50 AM