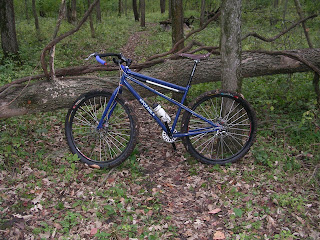 Mission accomplished! Dirt ridden, fun had. I got the Pofahl out and muddied it up a bit at the Camp. Apparently the heavy rains earlier in the week had left some big mud holes here and there in the lower sections of the trail system. I didn't stick around long and left to seek out some higher ground. 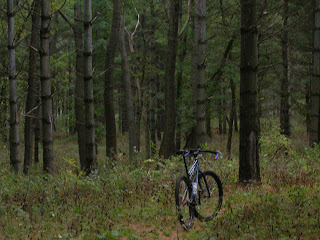 Fortunately, the Camp has plenty of trails higher up that drain well. I beat a path over to the Pine Wood Section for some swoopy single track fun.

Yes, Iowa has some pine woods here and there. Usually laden with the needles for your trail surface. I've seen trails here in Iowa that are clear and free of underbrush, but this trail shares the needles with lots of native weedy vegetation. 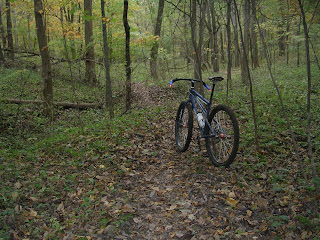 It was overcast, cool, and there was no wind to speak of. Very quiet with the exception of the random gunfire in the distance. It is hunting season after all.

I had some trouble in spots finding the trail to follow due to the low traffic that the Camp gets and the newly fallen leaf cover. I was out right after four or five other fellows, but could only find slight evidence of their passing. 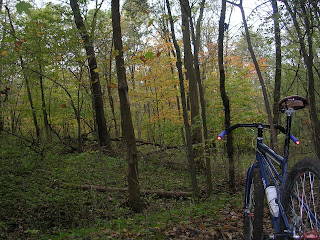 The trees don't seem to be co-operating with each other this year. Some of the maples are about done- leafs half gone already- while several other trees are still as green as they were in summertime. Color splashes here and there, but I've seen much better color displays in Iowa than this season has. 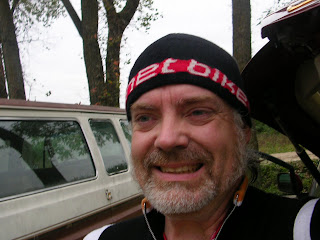 Two hours of dirt ridden, plus a sugary treat in the car equals perma-grin!

Had a great time, albeit a slow, steady one. Had to stop several times to decipher where to go. Also to take pictures and adjust a loose headset. It probably was a good thing I was by myself as I would have driven most people nuts, I think.

The Pofahl was great. I swapped out the 18 tooth Surly cog for a 21 tooth Surly cog before the ride. I think I found my off road gear for this bike. It turns out to be about 51 inches, give or take a few tenths! All that matters is that I can clean most of the climbs, although I have to stop to slow the "motor" down after a couple of the steeper/ longer climbs. The bike is fun to climb out of the saddle with, an important attribute for a single speed. The ride is smoother than I thought it would be, especially since the fork blades are much shorter than most 29"ers rigid forks. The Pofahl is not suspension corrected. It steers fast, almost too fast. I have to get some more saddle time before I can be totally comfortable with it. Industry Nine wheels are fantastic. I had forgotten how the highly tensioned spokes sounded when sticks hit them. PING! A very unique sound.

I was using a WTB Weir Wolf LT tire up front and a Nanoraptor out back. The muddy parts didn't agree with them, but the rest of the trail was perfect for them. Slightly tacky and covered with leaves and pine needles. No traction issues at all.

Overall, the Pofahl is just about dialed in. I think I'll be riding it at the Trans Iowa Tune Up Ride on the 27th. The 37 X 21 gear should get me by just fine, albeit not too fast! Looking forwards to meeting up with everyone that comes and having a good time. I just hope the weather holds out!
Posted by Guitar Ted at 12:52 PM