Warning! Extremely long post with tons of photo content. This may make you want to ride your bike!!
Another Fargo Adventure is in the books. Jason Boucher, head honch at Salsa Cycles and a good friend of mine organized this get together over the weekend. All things considered, it was a massive success.
Now as for me, well......that's an entirely different story! To briefly put it into perspective, here's the situation. I had not gotten a lot of consistent, good rides in before last weekends Guitar Ted Death Ride Invitational. The 118 mile ordeal put me way into the hurt locker for the better part of the week leading up to this. I wasn't getting anywhere the amount of sleep I needed, and time was compressed beyond belief on Thursday, making my late night arrival at Lebanon Hills campground unavoidable. Thanks to Captain Bob, I didn't have to set up a tent, since he came earlier with my tent and had it ready, otherwise I would have had even more stress going in. Thanks Captain!
Of course, even though I didn't get there until 11pm, we still had to stay up, have a few "adult beverages", and otherwise hob-nob a bit before crawling into the tent, oh I'd say on the backside of midnight for sure. The morning came waaay too early, of course, since Jason wanted to get out on the trails by 6am. Well, one thing led to another, and we didn't get rolling until 7am, but no one seemed to mind too much.
Out on the Twin Cities trail system, we noticed dark clouds, lightning, and thunder. We figured it might turn out to be a bit more of an adventure than we had planned, but we went onward anyway. We headed over for about six miles to Sibley House in St. Paul. The trail head to the River Bottoms Trail is here and pavement is left behind. Along the wet river trail we went, and for the time being, it seemed the worst of the weather had let us be.
Once we got into the single track section though, it got eerily dark. The wet weeds and underbrush painted us with their water laden leaves as we blasted by. It was so dark in there at one point, it seemed as if we were riding in a dreamworld. Then the clouds dumped their load of rain on us, and many of the riders stopped to don their rain wear.
It finally stopped, but the trail was greasy in spots and care going into corners had to be taken. I had a great, "in the groove" ride going through here. I felt like a million bucks at this point. We popped out at the turn off to QBP and several folks peeled off here to get into work. Jason, Captain Bob, MG, and I were the only riders carrying on from this point.
I'll let the pictures tell the story for awhile here................... 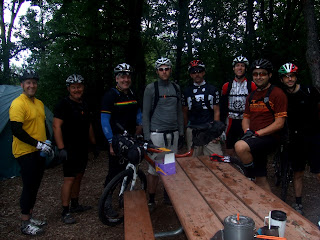 The crew at the start including some of the guys from Quality Bicycle Parts that joined us in the beginning of the Fargo Adventure. Picture by Ben Witt taken at the Lebanon Hills campground. 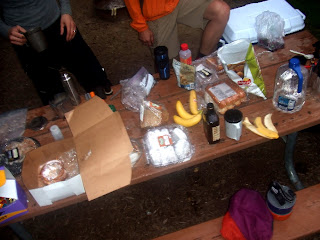 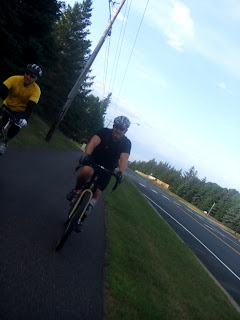 Captain Bob chats up Mike "Kid" Reimer along the bike path to the River Bottoms trail. 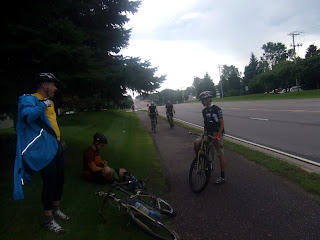 A break to re-group. Captain Bob, Jason, MG, and a couple riders catching back on here. The skies were ominous at this point...... 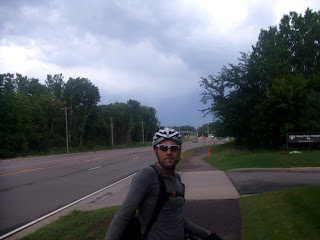 ............as you can see above Joe Meiser's head. Joe just came off a successful first attempt at the Tour Divide. The Trans Iowa V5 winner is flying now! Still, Joe is very patient with all the questions from us awe struck riders like myself. (Congrats on your successes Joe!) 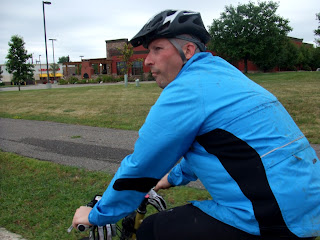 Captain Bob astride his Fargo contemplates the next intersection on our way to Murphy-Hanrahan trails. The River Bottoms were behind us now and all the wetness and single track prevented me from getting any shots in there. We were down to four riders now: Myself, MG, Jason, and Captain Bob, all on Fargos.

We had stopped at a convenience store to re-fuel in Savage, Minnesota, then we forged on towards Murphy-Hanrahan where sweet, flowy single track awaited us. Here I started to feel the week previous, and my pace slowed dramatically. I was in the hurt locker big time, but I kept pedalling onwards. In the single track, I spent most of the time riding alone, with MG, Jason, and Captain Bob flying up front. 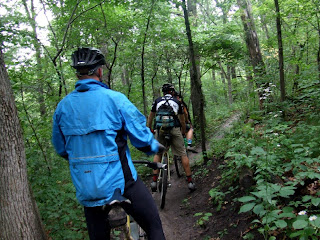 A rare shot of me just behind the Flying Amigos. 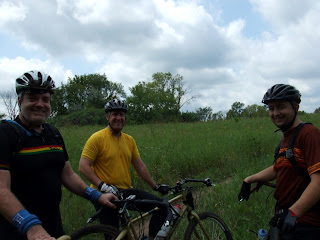 What a great day with some awesome brothers! Captain Bob and Jason here with me. MG takes the photo.... 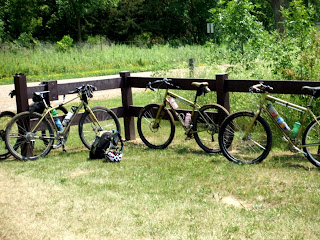 Four Fargos at rest. Murphy-Hanrahan is a must do trail for anyone in the vicinity of the Twin Cities. Great stuff there! 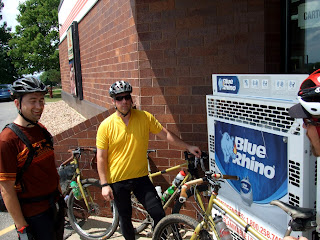 Re-fueling stop just before finishing off the ride. Here Jason, Captain Bob, and MG share a laugh in the bright sunshine.

The weather turned fine and hot by the time we finished up with "Murph". We had some big rollers getting back to Lebanon Hills campground. We managed to roll in around three pm with 57 miles under our tires and tons of smiles and fun along the way. I was pretty worked, but the cycling wasn't done yet!
Jason had invited us all to join him at a friends cabin in the Hayward, Wisconsin area for a ride on the Rock Lake Loop in the Chequamegon National Forest the next day. Captain Bob had to get back to Iowa, so our foursome was now a threesome. We slowly got showered and set up to roll out to Jason's house to stage the trip to the northwoods.
Jason graciously borrowed his prototype Big Mama to me for the ride, as my Fargo wasn't going to be suited to the "gnar" in the Rock Lake loop. Jason rode another bike that had to be assembled post haste. He was assisted by Captain Bob and MG. I sat down and chatted up Jason's lovely wife Jen and ate melon slices. (Hey! I get to work on bikes all the time, so....ya know..... I figured I'd let these guys have some fun with that!)
Once everything was tightened up and test ridden, we loaded up the car for the three hour trip to the woods. 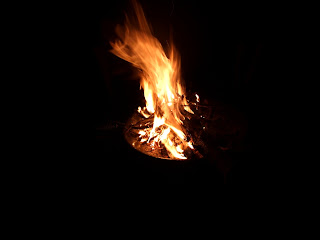 We got to the "cabin" ( read: House) when darkness was in full swing and we met up with some of Jason's long time friends and some new faces too. All of us there to enjoy a common bond in cycling. MG and I were remarking on how cycling had brought together such a diverse crew. It was pretty cool and the guys I met were all gracious and accommodating. (Special thanks to Kevin for your immense generosity and hospitality!!) However; once again a late night played into another short sleep session that compounded my situation.
The next morning the flapjacks and bacon flowed and we had more visitors arrive to join in the fun of the day. After a leisurely start, we piled into the vehicles that took us to one of the best single track loops in the nation- The Rock Lake Cluster. I had ridden there last in 1996, but the trails had all been re-done since that time. 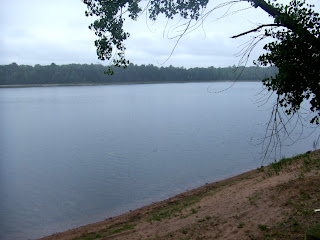 <===A view from our host's staircase bench over looking the lake his cabin sits near.
Unfortunately, my week and rides leading up to this Saturday ride were going to undo me. I got about a quarter of the way in and popped. I had nothing left. I basically hike-a-biked and rock crawled my way to the halfway point where a gravel road bisects the loop and headed back to the car. The rest of the group had a hoot of a time and afterwards we all went back to the cabin/house to have a barbecue of brats and burgers. Shared stories and good conversations were had. MG was persuaded to stick around for one more day, so now it was down to Jason and I.
We made the three hour trek home to Minneapolis and then my wife picked me up about midnight and we made our way back to Iowa. We just barely got into the state and pulled off at a rest stop to sleep. I finally made it back home to the house here at 6:30am, wasted tired and full of treasured memories of cycling with friends old and new.
Man! I am so cooked, but it was all well worth the agony and efforts. Thanks can't be given enough for all the help, graciousness, and friendships. You know who you are out there. I'll just say "Thank you", and leave it at that.
Thanks for reading and I hope you all have a great cycling adventure soon!
Posted by Guitar Ted at 1:00 AM