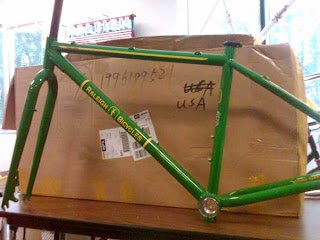 <===Another special Raleigh project bike....
Here ya go! Another special rig from the fertile mind of marketing wonk Brian Fornes at Raleigh. What does this remind you of? I live in Waterloo, Iowa, so this was instantaneously evident to me! (That's a rack on the Heron in the insignia, by the way!)
Anybody up for "Team Johnny Popper"?
This rig is a one off built from Reynolds 853 pipes and looks to have a split shell eccentric bottom bracket, which I think is a great way to have a clean looking single speed with a reliable tensioning system. My Blackbuck has this, and I love it. No worries with creaks, out of round shells, or stuck wedge type systems. Hopefully the new 2010 XXIX will have the same EBB type.
GTDRI 09: This Is Gonna Be A Cold One! Looks like record low temps for us campers at GTDRI tonight. I'll be bringing arm warmers, but other than that, I'll have to gut out this cold snap- in the middle of July!! Weird huh?
Anyway, we'll be setting out at 6:30am, and if you come, you better have some water ready, 'cause the campgrounds do not have water. You've been warned! Look for a full report Monday.
Get On, Or Get Out Of The Way: Some time ago now, I think it was 2005, Richard Cunningham of Mountain Bike Action said 29"ers were just a passing fad and to "stick a fork in it" as far as a movement. Now a mere four years later in his "Happy Trails" section and he is praising the wheels as the 26"er hard tail killer and short travel full suspension 26"er bane. What gives? Why the sudden change of heart? Well, I think the answer lies in his latest screed on 29"ers. He states that all the fields in the XC races are littered with riders on 29"ers below the Pro class. (And even that is changing rapidly in the U.S.) Basically, the proletariat of mountain biking has had their say, and they are not to be ignored.
Look, R.C. sells a magazine. Saying things that rankle a niche crowd and rings the masses bells are going to make for good sales and exposure. (See 2005's comments) Now however, it can not be ignored that a large segment of his readership is sporting wagon wheels, and if R.C. is going to weigh in with any sort of credibility in the future, as far as perceptions are concerned, he has to start changing his tune. And what better way to do it than with this latest salvo.
Now a couple of observations here. One- MBA just did a glowing tech piece on Niner Bikes R.I.P. 9 which was written by....you guessed it...Richard Cunningham. Niner's Chris Sugai pulls no punches when he talks of the 29"ers eventual domination of the off road world, once declaring that 29"ers would become "the defacto wheel size for mountain bikes in ten years." R.C. isn't quite ready to go there yet, but obviously he has been convinced by someone and their products that something is going on here.
Interestingly, it isn't just R.C. doing this turn about, but I am seeing this from many other corners of the mtb world. Folks saying things as if it hadn't been said about 29"er bikes before, when in fact it had been being said......way back to 2003..... and before.
But we were all just zealots then. Ah......the good ol' days! Being declared worse than a religious, dogmatic robot spewing the faithfuls big wheeled gospel is something I won't miss. I just sit back and chuckle knowing what I know, and seeing more and more 29"er product coming down the pike. Awesome!
Besides, it is all about the ride anyway. I just happen to like big wheels, they work better for me. Now I have choices beyond measure, and big hit bikes are coming now that I'll likely never need. I think it's great that folks will have a big wheeled choice in every category now.
Will it erase some 26"er choices? I still really doubt that it ever will. There are just too many folks riding that wheel size for it to ever go away. (Think 27 inch wheels. When was the last time you saw a new 27 inch wheeled rig, yet they haunt every nook and cranny in every city yet today.)
Whatever, I just find a lot of this "discovery" and covering of old ground quite amusing. Especially by the traditionalists. It has been an interesting ride so far, and I suspect it will only get better as time goes on.
Thanks for reading and have a great weekend! Ride yer bikes folks! Summer is about done with. (Really! It is summer, right?)
Posted by Guitar Ted at 1:00 AM