There Ain't Enough Room On These Roads Fer The Both Of Us! 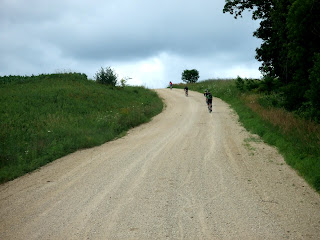 <===If certain Iowans have their way, you won't be able to do this anymore.

Freedom. Freedom to live and pursue your dreams. Freedom to move about the country and assemble in groups. This is a big part of what makes America different. It is what we are and what we do.

To that end we developed transportation routes so that we could pursue our dreams and live the way we chose to within reasonable limits. Now there are several ways to move around, to go from one place to another. It's all good, as they say, but not to certain narrow minded individuals that would have us lose part of what a lot of our fore bearers died to give us.

If you want to know, some nutjobs in Colorado tried to ban cyclists from county roads in that state and now here in Iowa some nutjobs are trying to suggest the same thing. Check out the details and links here.

Essentially the argument here is that "farm to market" roads are being populated by ever increasing numbers of cyclist. Cyclist that are "significantly impacting" the movements of rural residents and commerce. (Check out the verbal jibberish in detail here) Accordingly, "safety" is impacted because of all the "deaths and injuries" incurred by having these cycling pests out there in the way.

You know, I love it when folks suggest limiting freedoms due to "safety" concerns and how "commerce" and the local populace suffers from the "unwanted heathens". Okay you "Citizens For Safety Coalition of Iowa" folks. Let's follow your esteemed logic through to its conclusions, shall we?

Let's assume you are correct about bicyclists. My, wouldn't you agree that in terms of sheer numbers, bicyclists represent the smallest "outside" influence on "farm to market" roads in this fine state? Why, there must be far more motorcyclists inhibiting "commerce" out there. Oh, and how about those city folks going hither and yon across Iowa's county black tops at high rates of speed to avoid the clogged major highways. Shouldn't we be concerned about these yahoos as well? They far outnumber cyclists, by a long shot. Oh yeah, and what about all of those nubile young teens and college agers out for a good time, drinking and carrying on as they do. Surely you notice the beer cans and refuse as clues to their passing on the back roads of Iowa, don't you?

Well, since these folks are also "inhibiting the flow of commerce" and obstructing "rural residents", shouldn't they also be banned from "farm to market roads"? I mean, they are for rural commerce and residents only, right? And while we are at it, let's ban any movement on these roads unless it directly relates to "rural commerce" and the allowance for the passage of its "residents". You know, the folks that actually live out there 12 months out of the year?

Yeah, that's the logic right there folks. If you can't get along, ban them! How droll. I thought maybe we were more civilized than this, but I guess not.

Well, as ridiculous as this proposal is, we as cyclists must take it seriously. I suggest you write your State Representative and give them notice of this and that we as cyclists have a right to use the "farm to market" roads just like any other automobile, truck, motorcycle, tractor, quad, walker, runner, horse rider, and horse drawn wagon have. Because if we don't, then a lot of these other user groups don't either. Think about it. (You can find your legislator through the links on this site)

Freedom. Fight for it now or lose it.