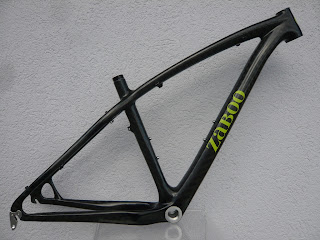 In the world of the internet, all sorts of wild, wacky stuff has been going on, and likely will into the foreseeable future. Wiki-leaks, Facebook, internet stalking, and what have you. One of the more interesting things the "Information Highway" has brought us is knowledge of source manufacturers for our toys that we play with. In this case, it is carbon mountain bike frames.

I first came across this when I started going to Interbike again. In the Asian Pavillion, the companies from the far East were displaying their wares trying to attract companies wanting branded components. I spied a familiar looking carbon fiber and aluminum 29"er fork in one of the booths. Upon closer inspection, it was found to be the "mother fork" to about a half dozen companies 29"er forks.

It was explained to me later that these companies simply specialize in some technique or facet of bicycle production, and then hawk their services to any bicycle company willing to work with them. Nothing wrong with any of the above, really. The thing was, it used to all happen behind closed doors. Not anymore.

Now let's take the case of the two carbon fiber frames I have posted here today. One is from a new start up in Switzerland, one is from an e-mail sent to a consumer direct from the Chinese manufacturer. Are they the same frame? Well, there is plenty of evidence that suggests that the two frames, while maybe not identical, are very, very similar. Too close for comfort, really. But the price? There is a grand difference between the asking prices for these frames. That's not chump change.

The thing is, you can contact Chinese companies that are advertising directly into the U.S. and buy frames, and complete bikes, direct. By-passing the normal economy. It's a product of the internet age, and it is going to change the landscape as far as how business is done at many levels.

What will happen is anybodies guess, but it is fascinating to watch it all play out. Obviously the consumer that is looking for value and the businessman/entrepreneur is at odds in this game and changes are on the wind. I'm betting sooner than later.
Posted by Guitar Ted at 1:00 AM

An excellent article. I want to support the LBS and local builders and all of that good stuff, but I have a certain income that does not allow me to buy the bikes and parts sold at one of the 'hand built' shows. The rest is truly built in Taiwan or China, so why am I paying bike companies who are at best brokers and marketers? You can argue that the way they choose to assemble the parts is worth the mark-up, but that's pretty weak: a few days reading opinions on-line will give the weekend-warrior enough information to decide on a build-up, and nobody's building the steel 29er Alfine 11 that I want!

The argument that this is bad for cyclists is like the argument against music piracy: B.S. just because you had a monopoly doesn't mean you were entitled to it.

This subject is super interesting. I've bought a frame from one of these companies in the past (the Chinese direct ones) and I have to say it was very nice. That being said, it did not match the quality of the expensive bike purchased at my LBS. I think the major difference maker here will be the "testability factor" that comes into play with a local shop versus the internet. That is, you can actually SEE what you're buying and even ride it, versus getting a product from a salesman with no face, no voice, and basing your purchase on the near blind-faith that is internet buying.
As the internet market continues to grow, I think there will be a surge in these "bargin buys", but soon people will realize that buying in person and spending a bit more money is actually providing them with a better buying experience in the long run. I only hope that most local shops will survive the period between!
Cheers,
Dave

Seems to me that this is the inevitable result of the "race to the bottom" that has affected every industry. Companies in Murkah and Yurrup got tired of paying the working wages of today's greedy employees. "We can't compete in today's marketplace! We need to outsource our manufacturing to Asia in order to survive!" Well, the problem was, those Chinese factories didn't really know how to do anything except supply an endless source of cheap Chinese workers. That was fine when we just needed them to build brooms and injected molded trinkets for the Perkins wishing well. But some clever bean counter figgered that there was money to be saved by getting the high end stuff built over there too. There were some growing pains. "Their quality sucks! We need to send over our engineers to install some better machinery and train the workers. And implement some quality systems, for chrissake!" Brilliant! This is all going swimmingly now! Margins are up, coz we only need to pay them poor bastards 5 bucks a day, and quality is world class, coz we transferred all of our technical knowhow right to them!

So now, we're supposed to act all shocked that these Chinese companies are starting to do exactly what we would do by eliminating the expensive middle man? The only thing that's left to complete the endgame is for them to establish some "brand equity", which at this point is the only thing that keeps a lot of the traditional players afloat. Only a matter of time, I would think.

Interesting article that can have lots of different view points and opinions.

It's unfortunate that multiple companies will fight/pay for the same manufactured item and then bring it to the market at different prices.

When it comes to the consumer, I hope future buyers really consider the pros and cons of buying direct over seas and or from the manufacturers. Think about warranty, service, communication and sustainability... Much of that probably won't exist. They come and go before you'll finish your next ride.

Yes, it can be frustrating knowing where an item really came from. You might think you "over-paid" for it because it has a brand name...but remember, you're paying for more than a sticker.

Buy from a LBS and research what you're buying. The benefits are worth the extra price.

Even if I'm riding a frame that's been produced overseas, I'll gladly pay more for one that's had the benefit of quality control checks top manufacturers employ during their overseas production runs. The brands I associate with typically have an engineer present during production simply to ensure their specification and quality standards are being strictly enforced. Because while it's possible to produce a frame that on the surface looks just like a top-performing frame, you can't see the epoxy resin used, for example, or the modulus of the carbon used in the layup.

Is that really what you want to trust your life to when you're bombing down a rocky singletrack at 40 mph?

Will you really care that you saved a little money when you're ultimately disappointed in the imposter's performance?

Support your local dealer and spend a little more for the frame you really want to ride. It's well worth the money. In 21 years of mountain biking I've never once been sorry for spending a little extra on a little better frame or components. That much I know for certain, and I have another titanium frame that'll be arriving this week (a drop bar Salsa mountain bike)... YEAH!!!

Have a great week.