So, How Did You Celebrate? 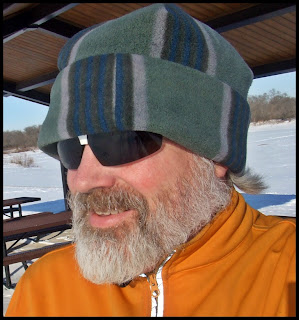 So, yeah..........yesterday was my birthday. I am not a big one for parties, and whatever folks do for birthdays out there. I just like to have a day, ya know? Peaceful, fun, relaxing. Time spent with my loved ones, and some time spent alone.

That's my idea of a birthday celebration, and that is exactly what I did.

I got out on The Snow Dog both days this weekend, thanks to what I refer to now as "The Conspirators" who made the frame and fork a reality in a much quicker and less painful fashion than it would have happened otherwise. (Thanks to you fellas!) The Snow Dog got built sooner than I thought and it made for a great "birthday weekend" for me. You can tell because if you look over there I am smiling. Yes, this was on one of the rides and no- I don't wear a helmet in winter on snow rides. Really, it isn't that big of a deal. I can keep my head warmer this way anywho.... 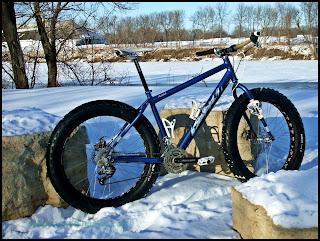 I peeled off the bar-mitts to show you all out there The Snow Dog without them. A "certain Trans Iowa winner" asked me how much it weighs. I retorted that I didn't realize folks weighed these things. I mean, it is a "fat bike" after all. After a certain point, it really doesn't matter, I think, but I would say it is 30 something pounds.

How does it ride? Well, as you can imagine, it is different. Bouncy? Yeah, a wee bit. Hard to pedal? No- amazingly it pedals rather well. That said, you can tell immediately when things start tilting upward, and I use a lot of the lower gears on this thing than I would normally. Does it float over everything? No. It needs help from cars, snow machines, or a lot of people. Packed in snow is your friend. Loose, un-packed snow is a no go. Especially the snow we have here now which is really dry, and acts like "hour glass" sand. 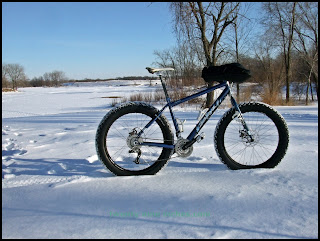 It does handle "car snow' rather well, and icy, packed in snow is no big deal at all. Even icy patches are a lot less dangerous. Still slippery, but not "instant down" like it is on skinnier tired rigs. Another nail in the coffin for studded tires for me. (I don't like studded tires, personally.)

I found some snowmobile trails and although the traffic has been low, I still made it through with ease. I wouldn't have been riding on last year's 29"er that I used.

One thing I didn't do, that I should have, was to disassemble the Phil Wood free hub and put in some thinner grease or heavy oil. I had free hub pawls hanging up badly yesterday and today.  Oh well! I guess I'll get to see how that comes apart now!
Posted by Guitar Ted at 1:00 AM

Glad to hear you're having fun with it, looks great! Any plans on building a set of 29 inch wheels for it and using it as a rigid bike in the summer? Happy belated birthday!

Happy Birthday.
That is one sweet hat, another birthday present?
Unpacked snow being a no go kind of kills the snow bike for me as I thought the Mukluk would handle new fallen snow on fields and woods. How does it handle the unpacked snow specifically?
Thanks,

Yes, Happy Birthday. I also wondered what you might do with it in the spring/summer, particularly for any on-road stuff.

@retroscool: Thanks! Yes: at some point I will build up a 29"er rear wheel for sure, and possibly a set.

@tom: Specifically, I think deep snow, fluffy, loose snow, and granular snow will be issues for anything other than a tracked, or ski fitted vehicle, since the snow in those situations is too fluid/plastic, and a wheel will cut in, or wash out in that sort of snow.

Packed trails, either by sledge, snow machine, cars, or people, is where this bike really will shine. Snowmobiles, with one pass, (but preferably more), in most snow conditions is all you really need.

Thanks for the birthday wishes, and the hat? That was a gift to me from a special, dear old lady over a decade ago. The best winter hat ever!

GT - Curious what tire pressures you are currently running. I would have expected that it wouldn't have had as many issues in powder as you mentioned.

@Steve Fuller: About 10psi, maybe less by now. The snow up here is really loose. If you step in it, your footprint fills back in, like an hour glass, before you can turn around and look.

I suspect that given the higher temps this week we'll see a different situation. Stay tuned....

Two five allen keys will get those caps off and then all you have to do is pull the hub shell from the cassette body. I neglected to do the same lube change out last winter and cased the inner-shell and engagement points in short order.

Luckily, Phil Wood took care of me and got me up and going with their wonderful service and customer care.

Phil Wood is an awesome company!

Thanks for your truthful analysis of the snow bike too. I am on the fence over the purchase and appreciate the analysis.

Well, I broke into the hub Sunday evening: easy, as you guys alluded to, and it is roached. I'll be sending it in to Phil Wood to get a new ring gear.

I celebrated your birthday by welcoming my son into the world! Now I need a snow bike, too.

Bummer on the hub. My Deore hub has been fine, even down to -22* F. Although the rapidfire shifters don't always catch in the cold. I found if I push slowly with my thum, they will catch. What do I know, I mostly only use thumbies.

My fat bike never fails to put a smile on my face.

@Andrew Brautigam: Whoa! Congrats on becoming a Dad! (And a great date to be born on, if I do say so myself!)

B. In snow such as you described, if it is not too deep, the skinnier studded tires work better. They tend to cut through to the dirt, where the fatties want to push the stuff out of the way. Kinda tiring.

+1 on the packed snow thing.