The Snow Dog Comes Together

Yes folks, the Snow Dog is starting to take form in the bowels of the Guitar Ted Productions Laboratory now. Two of the major pieces of the puzzle showed up Wednesday in a big cardboard box with a giant red splotch of color on the outside. Yep! The frame and fork made it in. 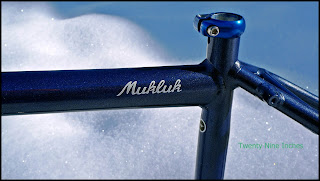 Before I whisked it into the Laboratory to start throwing parts on it, I got it out for a brief photo session in the January sun. The winter sunshine was playing a jewel-like symphony of light as it reflected off the myriad freshly fallen snow flakes from the night before.

You can click on the pics for larger versions, as always.

The Mukluk frames come with a blue anodized seat collar. A Salsa Lip-loc, no less. Nice touch there. 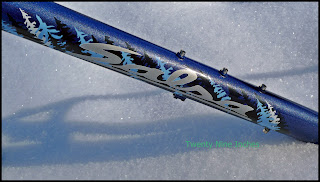 Salsa has been hitting it up with new, adventure inspired graphics for each of its new models. The Mukluk features a North-woods type of feel with the eerie bluish and ghostly white evergreen shapes behind a silvery Salsa logo. The blue is called "Moonshadow Blue", so I guess it works from that standpoint.

The three bosses in a row on the down tube can handle an Everything Cage, or standard water bottle cages in two positions. I have an old Blackburn Bomber Cage that will also fit this arrangement nicely. 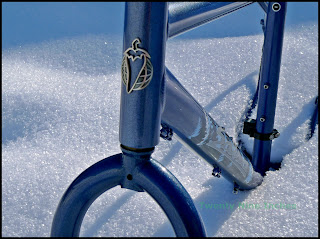 The Mukluk I  was possibly going to get was to have a black painted fork, but at the last minute, a painted to match one was found and that's what I got instead. It's an Enabler Fork, of course, and has all the Enabler Fork features. Things like a 135mm spaced drop out standard to fit rear hubs or specially made front hubs. This wider spacing makes living with 3.8" tires on 82mm wide rims a lot easier to do. The Enabler also features mounts for Everything Cages on each fork leg, or standard water bottle cages in a high or low mounting position. There is also a water cage mount under the down tube. Yeah- that's a lot of water bottle options! The frame, seat collar, and the direct front derailluer mount weighed in at 4.15lbs on my Park Tool digital scale. The fork weighed 1225 grams with an 9" steer tube and star nut installed.

The Build: Of course, I am putting this thing together, but it is going to be a process. Originally I signed on for a Mukluk complete. A no-muss, no-fuss option that would get me into the snow biking world at a very reasonable price. Then ol' Ben Witt started showing me fancy-pants hubs and rims, and well......this is a purely custom build now!

It's going to be a pretty unique Mukluk and "The Snow Dog" name will be a fitting moniker for it once I roll it out. When will that be? Hmm.......that depends. I'm waiting on a special package and I have a few conundrums to wheedle my way through, but if all comes together without anymore delays, it could be this weekend.

Update: Late last night I found out something that I had no idea about. Thanks to those involved in bringing this frame and fork to me as an early birthday gift. I am humbled and will always remember each of you every time I ride The Snow Dog.
Posted by Guitar Ted at 1:00 AM

Happy Birthday a few days early, my Brother. And congratulations on the new Mukluk. I have to admit I'm a bit envious of the sweet snow machine you'll be pedaling!

Really? I woulda figured at least 2.something pounds for just the fork alone. Is that right?

@dicky: Good catch. I altered the text to reflect the actual fatness of this fat bike.

Happy Birthday early Ted! You have to let me ride that at least once! :-)

Happy Birthday my friend! Hopefully, we'll be able to ride together soon.

Too bad it wasn't ready for the Triple D snow race, but we'll see ya next year on one sweet custom ride!
Lance