It's That User Conflict Thing 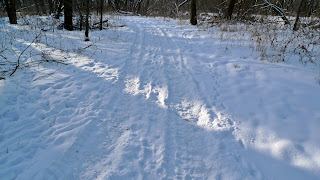 Since I had a few hours of free time Saturday I decided to take out the snow shoes, get some exercise, and in the process, scout out trail for The Snow Dog. I found out that somebody had also been scouting out trail for their vehicle. A motorized one.

The Green Belt is a multi-use trail that does not allow motorized vehicles. Of course, I have noted ATV tracks in the woods anyway. Not recently, though, and never an eye-witness to the activity. I figured it was just some younginz blowing off some steam. This time it went over the line though.

The Green Belt is used in winter by walkers and XC skiers for the most part. They get along by having the XC skiers take the outsides of the main pathway through for their two-track classic skiing. The hikers/walkers go up the middle. ATV machines? They just go wherever the heck they want to, I guess. Too bad. The classic tracks are wiped out from Ansborough to Ridgeway. 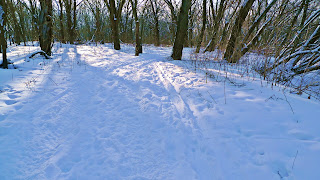 I trudged on in my snow shoes, not having to worry about the XC ski trail now. The ATV guys did their job too well. Fortunately, the previous thaw and re-freeze caused the underlying snow to keep the ATV machines from going all the way through to the dirt. That's good. New snow is supposedly on the way, but it shouldn't be too tough to get a good snow bike trail going through here now. This is on the regular mountain bike trails that go through along the river there. 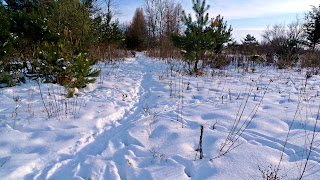 I escaped the mountain bike trails and chased some well pounded in deer trail for awhile too. Some of this might be good for The Snow Dog to tread on as well.

This area by the lake is pretty neat. Some great cedar trees back here, some of the thickest I've seen alive around here too. I can't wait to go through here on the bike, as it isn't all that far from home and will make a great loop.

The main thing is to avoid conflicting with the XC ski people, which doesn't seem likely now that the ATV people have gone and trashed their tracks anyway. More snow shoe recon will happen, but this is looking pretty tasty out here right now.
Posted by Guitar Ted at 1:00 AM