Today I am going to throw out some random stuff to clear off the desk here. (Hey, not every post is going to incite passionate responses and be "top notch", ya know.) So, check out the following tidbits-o-stuff that has been accumulating while I have been firing off missives on other subjects. (Winter time: Gives me too much time to think, ya know?) 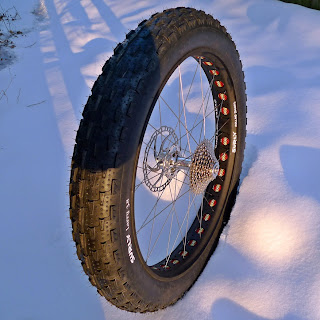 The Snow Dog Wheel: Notice that isn't a plural "wheels" yet. Soon......very soon! Small technical difficulty to overcome yet on the front, but here is the rear wheel in the meantime.

The cassette is a Shimano 12-36T 9 speed and the Rotor is an Ashima made Origin 8 185mm rotor. The cassette is the one from the stock Mukluk. The rotor is larger than the stock spec 160mm rotor. I didn't really care that it was this big, but I just happened to pick up a pair of 185mm rotors, never mounted, for a song. These are better rotors than Avid's by far, and I have had really good experiences with them in combination with the BB-7 calipers, which I have for this bike build. 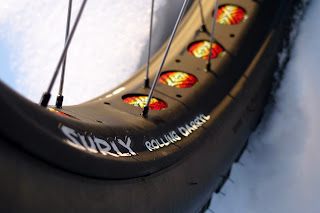 The spoking pattern may look odd here. What is going on is that the Rolling Darryl is drilled so that you can use the spoke holes over to one side to offset the rim, say for a Pugsley, which uses an offset frame requiring offset built wheels. Or, you can lace a symmetrical wheel, as I have done, which means the unused spoke holes alternate from side to side, instead of all being on one side like a offset rim build would show. Otherwise it is a standard 3 cross wheel build. 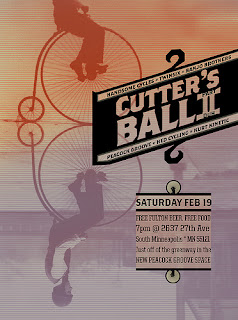 Cutter's Ball II: Here we go. Last year I went to the first Cutter's Ball at the Angry Catfish Bicycle and  Coffee Bar. Good times for sure. This year it moves to he new Peacock Groove space. That should be pretty dang cool. I just read through all the Peacock Groove history on the Velocipede site, and I'll tell ya what. It is pretty amazing stuff.

Erik Noren used to weld at Croll back in the day, and I just loved those rigs whenever I would see them. His own gig doing Peacock Groove is far more creative and free, and you can tell he has talent.

This should be a good time and I hope to be able to swing over and see the place and maybe a bicycle or two. Last year Erik Noren showed a couple of really rad bikes and his style is totally unique, which I happen to enjoy seeing. 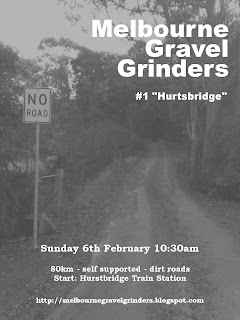 This flyer is posted up over at Gravel Grinder News, but I bring it over here because to me it is amazing to find out that gravel grinders are happening in Australia. You know, I was pretty much a "latch key" kid in terms of travel as a kid, and growing up thinking that "gravel" is only an Iowa thing was a given. Well, of course, I saw the surrounding states and figured, "Well, yeah. The Mid-west, but where else?"  Then I found out that Europe was once a gravel road haven, and my mind was opened. Now.....Australia?

Yep! Oz has gravel back roads. Who knew? Well........other than the Aussies! You know what I mean. Gravel. It's Worldwide, ya'all.

I like that idea myself.
Posted by Guitar Ted at 1:00 AM

I love it Mark! They look great. Hopefully you'll be out riding that bike soon.

Love the rim, and the photo of the rim strip too. I'm lusting after fat bikes more and more. Gonna have to wait tho.

How appropriate the start of a gravel grinder is "Hurtsbridge". :)