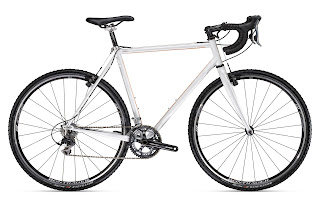 One Step On The way To The Gravel Concept Bike: Since the idea for the Gravel Concept Bike has been largely decided, I have been thinking about an interim rig to "get by" with for awhile and to test the waters on some of the ideas for that ultimate gravel road warrior.

So, I've had a look at the Fisher collection cyclo-cross rigs. They have several bits I like about the geometry, and are pretty basic looking with a single speed option. Thursday I got up close and personal with an Erwin, in my size, since the shop I work at received one for stock which I built up. There are quite a few interesting things about the Erwin, and the Fisher Collection steel cyclo-cross bikes in general that I liked, and a few things I didn't like.

Overall, the bike is pretty dang cool, and for the most part, I could probably live with this on its own merits. The geometry is decent, with exception of the bottom bracket drop, of course, since it is a cyclo-cross rig. That BB height is noticeable too. I really felt like I was sitting up in the air on this rig, and it only had 32mm tires on it! Bigger tires would jack it up even higher. Not my cup-o-tea, but there are several things that I did think were cool, and speaking of bigger tires, that's one of them. in fact, I am certain XR-1's would shim into this frame. That's a 29"er tire folks! The clearances on this frame are enormous. The head angle is slack enough, and the bike in a 58cm fit really well. They moved the cable hangar for the front brake to the fork to reduce front brake flutter, and it has the hidden fender mounts that Fisher Collection road bikes have. Rack mounts too. The sliding drops mean single speeding this is a no-brainer.

I don't really care for Tiagra shifters and components though, and for the price of the Erwin, it seems a bit cheap on the drive train spec. ($1500.00MSRP) The wheels are "meh", and so is the crank set. I do like the Presidio's SRAM spec, but that is the next step up and even more money for the same frame and fork otherwise.

Ideally I would get the Presidio and when the custom bike was done, I'd swap over most of the geared stuff to it and single speed the frame on the Presidio, (or Erwin), and keep it, most likely, as my SS gravel rig. We'll see. 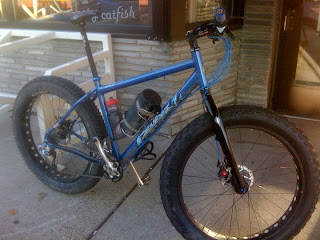 And In The "Other Bike" News: I got a voice mail message from Ben Witt yesterday, (Thank you sir!) saying that everything for the Mukluk is in but the frame. I suspect that by next week then I'll be getting my wheels built and will be anxiously awaiting my frame and fork.

Maybe, just maybe I'll have it in time for Frostbike. And maybe, just maybe- if everything falls into place, Marty and Ben will have their fat bikes and we can all goof off on fat bike at Mike's Bikes in Northfield. (hint-hint), or do some other dastardly fat biking around that area. Hmmm.........

Well, it is rather cold out this weekend, but if you can, go outside and do something fun. Have a good one folks!
Posted by Guitar Ted at 1:00 AM

also, what do you mean by "hidden" fender/rack mounts?

I think it's great that so many of the Fisher bikes support SS (including the Sawyer), but they only seem to sell them as complete bikes - with gears. Transmission seems to have become very expensive in the last couple of years, especially if you plan to ditch it, shame you can't just buy the frame and fork.

My only real beef with Trek has always been the lackluster components they put on a bike they charge premium prices for. The Presido has always been a coveted bike frame though.
I'm not doing the gravel bike thing but I am in talks, an active dialogue even, over a long ride, dirt, gravel, pavement tour capable S&S coupled bike in steel. Close to a tweaked Vaya.
You would think an adventure bicycle company would build a bike made for travel (hint, hint).

building those wheels is going to be orgasmic!!!

i am so excited.

@gregclimbs: The pic does indeed show something different for a cable hangar. However; the example I built up Thursday has the fok mounted guide, as I described in the post. Running change, most likely.

The "hidden fender mounts" are removable studs with threaded eyelets at the end to mount your fender to. You can take them off for a cleaner- no fender look.

The Presidio has been at the top of my short list for this coming year's gravel action. I am hoping to throw a leg over one soon.

If it's possible to answer this quickly (don't take too much time): how do the updated fisher cross bikes compare to the '09 models, other than the lack of sliding dropouts? I know the steel and geometry are different, but I don't know if they are for better or worse. Thanks!

@MostlyFurious: Essentially, the move to ditch LeMond and do Gary Fisher road/cyclo-cross rigs left little time to re-invent the line. Therefore; the '09 Gary Fisher cross bikes have what is essentially Poprad angles and geo. Longer, slightly slacker seat tube are the big differences, The current '10/'11 geometry is shorter in the top tube and a bit steeper in the seat tube.