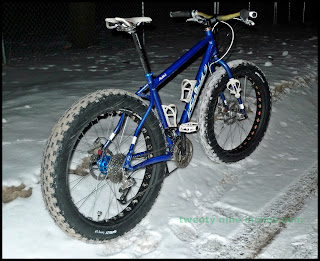 Well, as many of you readers know, I have a snow/fat bike I dubbed "The Snow Dog". What many of you don't know is that I had some trouble already with it. Here's the deal...

I got the thing together and rode it to work the first time just over a week ago. It was making noises, and that isn't to be wondered at, since things were new, used, and just assembled together for the first time. I figured there would be a few hiccups. No big deal.

I dialed things in and did another ride a week ago Saturday. Whoa! Things were snappin' and a cracklin' that shouldn't had ought to be. I determined that something was amiss in the drive train. I got home and pulled the rear hub apart, and yep!  There it was. Bad pawl that caused a torn up drive ring. The situation didn't look good, but I wanted to ride it on my birthday, so I popped it back together, and Sunday a week ago went for a final ride before I would send in the wheel to Phil Wood & Co. for repair. I wasn't going to have a wheel for possibly up to two weeks, maybe more. 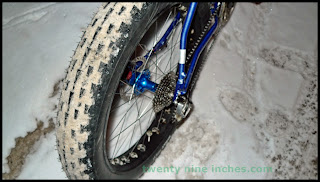 As you can imagine, I was pretty bummed out. It was like giving candy to a baby, and letting them taste it, and taking it away. Well.....except that I didn't bawl and throw a huge fit! Let me tell ya, I felt like it!

I just tried to let it go, but when I told Ben Witt about it, he hatched up a plan. My buddy Captain Bob was to pick up his new Spearfish from Ben's shop on Friday, so Ben sent his own fat bike Phil Wood hubbed rear wheel back with Captain Bob so I could ride for awhile. Awesome!

So, there it is, all blue with a rim strip that is all furry like the interior of a 70's Chevy van conversion! Thanks Ben! I totally appreciate the kindness! 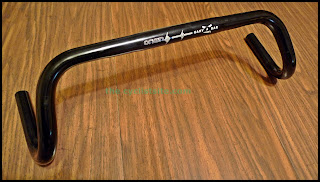 Next, I got ahold of the new Gary Bar II from Origin 8. Remember the old Gary Bar? Yeah......well this one is totally different!

The first Gary Bar  was loosely based off the On One Midge bar. The overall dimensions were very similar, but the "slope" of the drops was more severe. Here is a link of a comparo I did between the original Gary Bar and the On One Midge Bar. 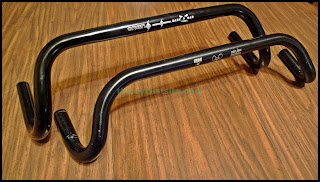 I'll also be doing the "big comparo" again with the newer version, but for now I can say that the Gary Bar II is waaay different than a Midge Bar, or any other off road drop bar. The new bar also uses 6000 series aluminum and has a nicer overall finish and feel than the older Gary Bar did. The "flare" or "slope" was radical on the first Gary, and on this one, it is very subtle. Less than the Midge for sure. It has more drop, and the extensions are even longer than the first Gary Bar's were. It also sports a bit more reach to the drops as well. It is 5cm narrower than before and looks much closer to a road bar than an off road bar. Less sweep to the drop section too. In fact, if I didn't know any better, I'd say it was a closer knock off to a Nitto bar than anything else.

The new Gary Bar II is also bar end compatible and retails for about $40.00. I bought my own, so I could compare it to the Midge, (which was graciously submitted to me for use by Captain Bob. Thanks man!) As I said, look for more soon, and another contender or two will also be added to the mix. Stay tuned...
Posted by Guitar Ted at 1:00 AM

My biggest disappointment with the original Gary bar was that I found out too late that it didn't accept bar ends. Not a big deal now that the Karate Monkey is a dedicated speed, but at the time...

Just a random question, I never see Bar Mitts or comparables on your bikes. As someone who rides in SE Iowa year round, I started using them this year and I am addicted (mainly because my extremities freeze on warm days). Any reason you dont use them?

@Bruther: I got these ATV bar mits at Blaine's Farm and Fleet for $20.00 I posted a pic with them on the bike here: http://g-tedproductions.blogspot.com/2011/01/bonus-post-snow-dog.html

Too warm for me most of the time.

Could be my bike set-up or maybe the terrain that I'm riding but I'm using a set of Titec H-bars on my snow bike lite and have found them to be very beneficial. I find that when riding in the snow I tend to move my position around quite a bit looking for traction or stability and these bars allow me lots of opportunity to do so. Just thought it might be something that might be of interest to you or somebody else. They may not work very well with a set of pogies but I've been riding mine with a good set of winter gloves with success. Glad to hear you're able to get out and keep riding.

My new favorite bars on the Pugsley are the No rise Open Bars from Surly. XT brake levers, single suntour thumbshifter and Pogies. 666mm wide!
ari

I have Gary bars installed on two bikes and both of them have bar-end shifters.

Here's a link that includes photos of both bikes with bar ends installed.