Many of you long time readers have perhaps remembered that I had a go-round with Gates Carbon Drive belt systems a while back. Well, here is a "long term" update on what has been happening with that since my last update. 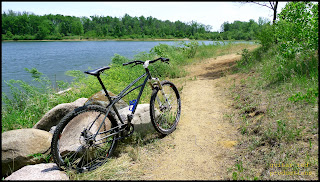 In my last update I described how Gates had been getting me set up with belts for the Sawyer, which is a Gates compatible design from Trek. I had two belts and due to their inappropriate lengths for the Sawyer, there were certain issues with performance. Gates then got the "Goldilocks" belt out which solved fitment issues and allowed for the proper tensioning of the belt.

Update: So I have had the Sawyer set up with the proper belt on it since last fall and throughout the winter and spring I have finally come to trust this belt and use the bike like I would any other single speed. Yes- there was a trust issue.

When you single speed, there are times when you are applying such a great force to the pedals, that if a chain broke, it would result in a catastrophic event to the nether regions, face, and maybe the knees as well. Let's just say- it wouldn't be a good thing! So, when I first started having ratcheting issues with the belt driven systems I was trying, I was loathe to hit the gas hard going up a hill, like I would on my chain driven single speed rigs, for fear that a belt ratchet event would result in severe smack-package.

I am happy to report that as of yesterday, that same level of trust I have in a chain driven single speed was finally attained on a belt driven single speed. Okay- one hurdle passed. It works grunting up a hill out of the saddle and without any noises at all. 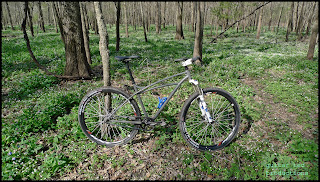 Okay, so you probably can now get a Center Track system and set up your single speed to be a reliable, noiseless, smooth bike with a maintenance free-ish drive train. (You still have bearings to deal with.) However; as my example so plainly points up, the switch between gearing ratios, or bikes, can mean entire new belts and cogs. Expensive and not practical for the masses.

In that detail, The Chain will always win out. It will be cheaper and easier to use than a belt drive. It will be easier to get anywhere as well. But......The Belt does work, if you so choose that option.  (As long as it is a Center Track Belt, and you have the correct size/length, and your bike is compatible, ie: "stiff enough".)

So, the only thing I can't speak to right now is longevity. But hopefully I'll have this together long enough to ferret that out. Stay tuned for another update on that.........in the future.

I wonder what that gravel will do to it long term.
ari

Too many "if's" for me. "If" your bike is stiff enough, "if" you can find the right belt length, "if" you use the Center Track and not the original version and finally "if" you have really deep pockets.

I have a Spot Brand frame, tried the original CDS and had too many issues. All the ones you mention as well as poor frame clearance with the front ring. I went back to the chain and have been very happy.

I'd try the Center Track version only "IF" Gates was willing to send it to me with a 110% money back guarantee. Because right now, I have $300 worth of CDS hanging on my wall.

I don't know what system/generation of belt drive was in use... but there was a dude with one at the Almanzo. I passed him around after I came back to the 100 course (I was racing the 162). I noticed he had a belt drive because of the god awful racket it was putting out.

@Ari, @rideonpurpose: The noise in very dry dusty conditions was also noted by my Twenty Nine Inches co-writer, Grannygear. He was experiencing a high pitched squeak when things were very dry in SoCal. His solution was to spray the belt with silicone, which quieted down things for him, but the process had to be repeated about as often as one would lube a chain.

I had tried getting a gravel grinder bike with a belt drive for testing, but it never came through. I suspect I also would have found the same noise the Almanzo 100 rider did.

Had to post a follow up comment. Thanks to your blog, Gates contacted me and asked if I'd be willing to give the new Center Track a try...for free! Mark and Todd hooked me up with the right parts and got my Spot belted up again.

I must say, the new Center Track is amazing. Much better then the previous generation. Even the installation was easier. Simple swap of my old chain bits for the new belt and pulleys. Didn't have to move any spacers around, didn't have any clearance issues, nothing. 10 minutes swap-out and the bike was belted again.

I now have a couple "good" rides on the new system and it has worked flawlessly. The original system NEVER worked this good, ever. The Center Track has not skipped, I can run lower tension and I don't worry about burning out my BB or freehub bearings. So far, I'm very happy and impressed.

If you tried the 1st generation belt drive and had problems like me, the new Center Track is worth a second look. It will restore your faith in the product. Gates did their homework this time around.