Since I started out on this "steel for frames" deal yesterday, and asked "why steel?", I thought I'd show you all where I put my money and why. Each of the bicycles I will be featuring will be bicycles I bought and paid for. Yes- I like steel framed bicycles!

Yes, this one has been around my stable for a while now. It still is one of my favorites too.  So, just what is it that makes this bike so good?

I often wonder why it is I like this one so much. I am quite sure I've never owned a bicycle that was set up in so many different ways. Not because I was searching for something I wasn't getting out of it, but more so because it just works so darn well no matter how I set it up!

Some of that is due to Mark Slate's design, of course. Mark along with Steve Potts worked on some of the very first 29"er designs back in 1999. So Mark was able to draw on that design work when he penned the Blackbuck for his own brand, OS Bikes.

The Blackbuck has a nice amount of exposed seat post, which is good for some smoothness, but I figure that the unique seat stay styling has something to do with it all here as well. Just my hunch, nothing "scientific" there. The front triangle isn't the stiffest out there, but it isn't a noodle. It works well. 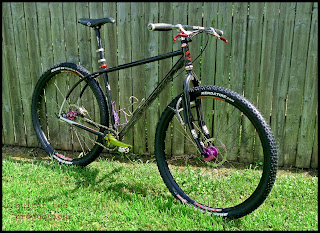 With a rigid fork up front, the Blackbuck's front end stays smooth. Add in a big, fat front tire and it's downright awesome for single speeding around these parts.

So it works well with either a suspension fork, or not, and the handling is smooth, like a steel bike should be smooth. Added into this is the fact that there are less than 500 examples of the first series Blackbucks out there and it becomes a bike that has a little bit extra for being out of the ordinary. Top that off with it being designed by mtb pioneer, Mark Slate and it hits all my buttons for "cool mountain bike".

The fact it is made from steel makes it ride the way it does, and look the way it does. It is durable, repairable, and, (as in the case of one Milltown Cycles mechanic's Blackbuck), customizable, if you want to take things that far.

If I could change anything about the Blackbuck, I'd probably just add a 44mm head tube. Otherwise, it's about as good as it gets for a steel 29"er hard tail.
Posted by Guitar Ted at 1:30 AM

steel is my choice. four custom frames, 3 Surlys and a few others. fresh coat of wax makes everything new.

What's the story behind that fork? It looks bent, but I'm going to assume it's supposed to be that way.

Other materials might ride well too, but when you consider cost and durability steel comes out on top. 6/8 of my bikes are steel.

13 (adult) bikes and a tandem in the house, all steel except the lady's Litespeed. There is a certain timeless elegance unmatched by any other material.

gee, yanno Mark, all these sweet ride pics makes me want to add another or two to my stable. How can I tell her?...:-)

@Matt Maxwell: That is a repainted and modified Willits W.O.W. fork. It has Wes Williams' signature bent legs idea for more compliance. It actually does give a bit more than a typical fork, but that is also going to rebound with zero damping. That sometimes is not a good thing!

I have since traded the fork off for a pair of 70mm Uma II rims for my fat bike.