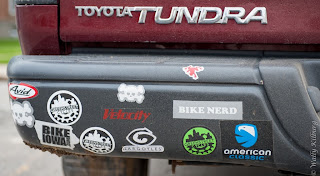 Note: All images by Wally Kilburg and Guitar Ted. Click to make bigger.

I rode a nice, sedate gravel grinder Friday evening that included T.I.V7 and V8 finisher Mike Johnson and T.I.V5 and V7 finisher and volunteer on this years T.I.-  Jeremy Fry. The chatter was heavily Trans Iowa, and it is quite obvious that this adventure stirs up memories and emotions for more than just myself. However; there is a lot more to life, and riding bicycles than just Trans Iowa. It is time for all of us to move on and do some other things in life and cycling for awhile.

I will only indulge myself with this last word or three about this year's version of Trans Iowa. In no particular order, here are some final thoughts then..... 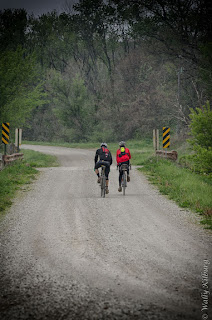 Electronics: The GPS is more common now and although it doesn't help you to navigate the course, riders were able to ascertain on a larger scale where they were heading. I'm not sure this is a big deal, but I am still ruminating on that facet of technology. Also- it was interesting to note that some riders were able to listen to my "Trans Iowa Radio" posts and figure out who the leaders were and how far up the road they were. I'm not sure that the leaders would use this information anyway, so I am only finding this amusing at this time. However; it is something that bears watching.

Flying Solo: I must admit that I was a bit apprehensive  about running the entire T.I.V8 course out there alone, but it worked out well anyway. Some folks were expressing concern over this, but I will tell ya- there wasn't any room for another person in my cab!

The Future?- I won't publicly commit to another Trans Iowa just yet, but if I did....... There would be room to improve upon some major gains seen in this years event. I would still have those "high bars" that I set for T.I.V8, and there are some tweaks or things needing attention that could be touched upon for a next Trans Iowa. Oh yeah......and it would start and finish in Grinnell again, most likely.

GT-
I would like to give YOU a huge thanks, as well. This year's event was awesome. Cue cards were spot on (we didn't get lost!), course was incredible, volunteers were lifesavers. I've enjoyed reading about it this past week as well, and know its a labor of love for you, and cannot thank you enough for all your hard work and dedication to pull it all off. I'll be back if there is another, either riding or helping out.
Scott B

We were so happy to be part of the whole big thing that is Trans Iowa. Please let it be known the the Slender Fungus is committed to helping and fostering any future Trans Iowas. We will keep in touch in the mean time. I can't wait for the photos.
Ari, Dr. Giggles, Gumby, T.J. and our finishing boy Cookie.

I'm a fan from afar. TIV9, 10, 11 ....need you, Ted. Please get a driver, so you can do the texting/talking/planning etc while on the move. Seriously. Thanks for the show, you'd be surprised where you have supporters!

If I haven't said it before I'll say it now, thank you for putting on this race. Organizing, planning, and running it has to be a challenge at least as great as riding in it.

Before I started I promised myself never again, but around mile 250 or so I caught myself thinking about next year. If there is a V9 I'll be there one way or another. Thank You.

You're welcome, and thank you once again... It was my privilege to be a part of this awesome, life changing event.

GT - I have to agree on the comments from the racers. I received a lot of "thank you's" from the racers as they rode by (slow or fast). Thank you for the opportunity to be out on the course and document a bit of the event.

I'm hoping for V9. I'm willing to let one of my lives go to try and finish your crazy event on a bike next year.