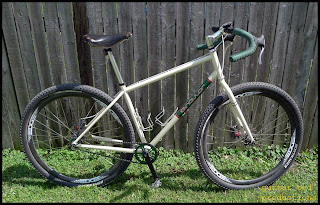 
Remember yesterday's post when I said I wasn't too interested in a single speed version of a Fargo? Well, this here is the reason why. The Gryphon was a purpose built drop bar bike for 29 inch wheels that was developed right along the same time as the Fargo. Unlike the Fargo, the Gryphon was fitted with an eccentric bottom bracket shell. This allowed for use as a single speed.

I had been carefully following the development of the Gryphon via Singular's blog, and when it became apparent that the Prairie Peddler would import these into the U.S.A., I decided to jump on getting one. I received my frame and fork at the annual Frostbike gathering at Mike's Bikes in 2010. I built it up with some nice parts and it has remained a single speed ever since.

I kind of used the Gryphon as my Karate Monkey gravel grinder replacement, but I also did ride single track with it. In several ways, the Gryphon is the bike I wanted to have all along for myself since I put drop bars on my Karate Monkey a few years before getting this bike. 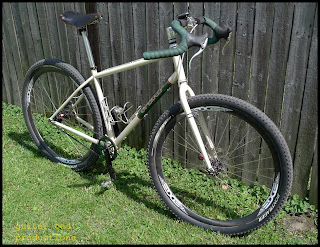 Even then, you'll want to watch the weight. A big load and these lively tubes won't want to mix well.

The Gryphon is capable of handling a derailleur set up, but again, I have a Fargo! The Gryphon is really well suited to single speed action anyway. It has the unique feel of being "in the bike", but it is still easy to get out of the saddle on climbs. The Gryphon is also a bit shorter in the rear end, which gives it an advantage in single track over the original Fargo. Now that the new Fargo is here, the similarities on dirt are nearly equal.

But my favorite thing is to single speed this bike on gravel with some fast, light racing 29"er tires. It rides sooo smoothly and climbing while out of the saddle and mashing a gear is met with good performance. So while the Fargos are nice, this bike has found a niche in my stable for sure.

Good Luck! I want to wish all those racing the Almanzo 100, Royal 165, and Camp Ingawanis race good luck. If you are competing elsewhere, good luck to you as well! Ride yer bicycles, take pictures, and keep the rubber side down.
Posted by Guitar Ted at 1:30 AM