The Fargo has been a bike I have had around since 2008 in the original form, but when the revised version came out, I didn't see any motivation to pick one up. I mean....I already had a Fargo. Right?

Well, a little demo ride at Interbike at Bootleg Canyon last September opened my eyes big time. This newer version of the Fargo was different. Better on dirt. I had to get one.

Once again, Ben Witt figures into this steel story. I had been up to his shop and had seen a green Generation II Fargo frame sitting around. I asked after Interbike if he still had it, and he did. Not long after, I had it in my possession and built it up as you see here.

My initial impressions from Bootleg Canyon proved to be correct for our trails back home too. The newer Fargo is much more adept at actual mountain biking than its predecessor, which wasn't bad at it, by the way. The differences are in the way it steers mostly. Thankfully, the fit is even more conducive to mountain biking as well. 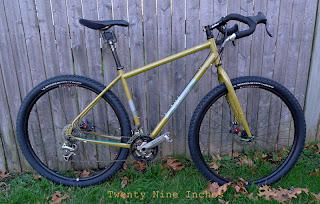 Now I have to admit that I have not ever ridden this one without the Thudbuster seat post. So, my impressions of how nice it rides are certainly colored by that. I will say that the fork is pretty nice in the traditional Salsa Cycles way, and I can detect that the frame is doing some nice "steel-like" things under me as I speed along the single track.

I still have the "Gen I" Fargo, and for me, that is the ultimate gravel machine/ touring rig with fat tires. This one here is the best drop bar mountain bike I have. It just eats up single track like nobody's business. I may have to get a set of road BB-7 brakes and put some STI levers on this one to really get the shifting where I need it to be for "hot and heavy" single track action. The bar ends work okay, but I end up not shifting, or missing shifts when I get flying on the twisties. But that isn't a fault of the frame.

I don't think I'd really change much here. There are some who would like a "single speed version", but there isn't any need for that for me. (You will all see why that is tomorrow!) No- this is almost spot on as it sits, and the frame is really great.
Posted by Guitar Ted at 1:30 AM

I've always loved reading your thoughts/experiences on these two,my friend...one day I may actually procure one of my own,and if so,that's 100% thanks to your praises/thoughts on yours :)

I would also like to see single speed/IGH capability on the Fargo, and possibly the Vaya. Seems to me this could be done quite easily, in the same manner as the Raleigh Furley/Roper, by using a PF30 BB shell, allowing an eccentric BB if needed.

I agree with your thoughts here 100%. I'm glad I kept hold of my gen 1 Fargo, and though my gen 2 "Fargo" is Ti, the handling/feel differences are intact. And I like 'em...

The Fargo is an awesome bloodline of bicycles. I'm getting ready to click into the pedals of my steel Vaya now, actually... A close relative to the Fargo (in fact, before we knew what it was officially called, in the summer of '08, you and I called it the 'Fargo-lite').