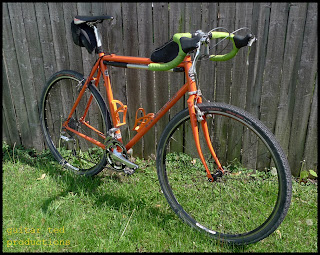 Gravel Ride Tonight! If you are a local, don't forget the "3GR" tonight which will again start at Gateway Park in Cedar Falls at 5:30pm.

I'm planning on about a 25 mile route, basically more of the same from last week. I cut last week's short due to the sketchy looking skies, but this time the weather is supposedly going to be stellar.

In the future we'll do different routes, so stick around for some fun stuff hopefully every Friday all summer long.

Speaking of gravel rides... The next big deal I have going on will be my "Guitar Ted Death Ride Invitational" which is slated for July 15th, 2012. Now, every year I have to say this, but this isn't a race, and it isn't exclusive. It is a gravel group ride of at least 100 miles or a bit more in a day. we never leave anyone behind, and anyone that is up to it is welcome. last year I had 12 or so folks show up and we had a blast.

This is a free, unsupported event. You are responsible for you! I have to come up with a route, or I could do last year's again. I may do a route out of Hickory Hills, the Grinnell area, or up in Northeast Iowa again. Anyone want to sway my opinion? Hit me with a comment.

And More Gravel Related Stuff! The other day I posted on Gravel Grinder News about the new Kona Rove disc gravel grinder bike coming out later this summer.

The image here is of a prototype, so that isn't the final color, most likely. Paint it orange though and say "Salsa La Cruz". See any resemblance? I sure do.

Funny thing about the La Cruz is that it was lamented after it was cut from the line. The Vaya kind of took its place, but folks still longed for that "classic" cross bike profile with big tire clearances and disc brakes. Well, we'll see how many catch on to the Rove here.

The Kona site says this is a gravel grinder/tourer/commuter. The fact that they even use the term "gravel grinder" is a big deal for us that do just that with ou bicycles. It means the marketing machine thinks this genre is big enough to market to. Weird in a way, since we've all been out there doing this for ever anyhow. But still.....it's nice to be recognized!

Kona also says that this bike's geometry isn't "too long and low". Now that has me scratching my head, because what cyclo-cross based bike is long and low? A peek at  their geometry chart doesn't reveal anything very forward thinking either. It isn't bad, mind you, but it isn't anything to write home about.

No- it's just good, solid, safe geometry folks will get along with just fine, I suspect. It'll be interesting to see if they sell anymore of these than Salsa did before they cut the model out of the line up.

Okay, that's all for today folks. Go ride yer bikes, take some pictures, and have some fun.
Posted by Guitar Ted at 1:30 AM

How about part of the trans-iowa route. There were a lot of b roads we didnt take that look interesting

I am in the initial stages of planning to attend the death ride. I will have to leave ILLinois very early to make the start. A start in Grinnell would put me around 3 hours of travel. That's my vote.
Ari

Do you want to give folks long and not too difficult or long and difficult. NE Iowa was awesome, but those last 90 miles had some brutal spots. Good chance that I will be out of the country that weekend, so don't let me sway you too much :)