The Rookie Lottery Drawing for the last 40 spots available in Trans Iowa will occur at 4:00pm CST live on Periscope which can be accessed through Twitter at the account @guitarted1961

73 hopefuls will be looking for their names to be moved from the pool list to their desired category in the T.I.v12 event which will take place out of Grinnell, Iowa April 23rd and end on April 24th back in Grinnell, Iowa at Arbor Lake Park after 323.3 miles of gravel. Watch it all unfold on Periscope tomorrow at 4:00pm CST or wait for the roster to be updated by 6:00pm CST to see who is in and who is not for the chance to "slay their Dragon" at Trans Iowa. 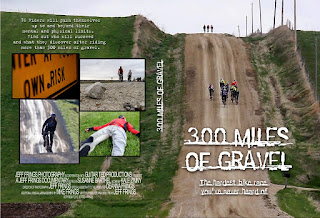 300 Miles Of Gravel Available To Stream:

The documentary on "300 Miles Of Gravel", a look at Trans Iowa v7, is now available to stream onto your devices to own for five measly American dollars. This 27 minute long look at a Trans Iowa event won a  Regional Area Emmy for Outstanding Sports Programming- One Time Special, and is often replayed on Iowa Public Television in a truncated form that includes an interview with the film's maker, Jeff Frings.

I've been told this film has been quite the motivational device for riders, and that it was a good way to start with preparations for an attempt at Trans Iowa. Not my words..... Also- a disclaimer: Guitar Ted, Guitar Ted Productions, Trans Iowa, nor RidingGravel.com gets a penny from the film. I've never benefited from this financially, so this isn't hawking my merch here. Check it out. You won't be disappointed. 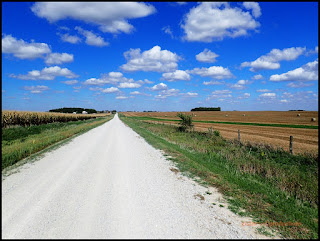 I've been privy to some discussion about a new gravel event coming next year, and I wouldn't say anything about this at all, but for the individual who is the creator of this idea has already let the cat out-o-the bag on Facebook.

So, this looks like it will be a 150 or 200 mile event in Central Iowa, (HILLY), in October. Think "Trans Iowa" style, self supported, cue sheet nav, etc. If it happens, and I've no doubt that it will, I am down for this gig. It will come at a perfect time for me, as I am most at home in cooler weather, and the Summer events will have been long in my rear view mirror by that time.

I know the creator of this, and its route has been reconned already by bicycle, so I am certain this will be a quality route. Stay tuned, because if I hear more about this event, I will be posting about it here. I'm pretty excited about it, and I would really like to see this take off. The Central Iowa area has been a spot I've stared at while looking at maps and while traveling past that area going West to other events.

Back when I got my Black Mountain Cycles frame and fork, there really weren't too many bicycles available that could stand up to my requirements for a gravel travel steed. I was seriously contemplating going with a custom made rig, but my poor experiences with custom made bikes wasn't helping me out and so I took a good, hard look at Black Mountain Cycles. That frame had a slightly taller head tube and a bit different geometry than a Surly CrossCheck. So, I pulled the trigger. It has been one of my all time favorite machines since then.

Now news has come that the venerable Monster Cross rig has been changed slightly to have a slightly taller head tube, more fork offset, a Pacenti fork crown, and it will come in British Racing Green or a Pink that is much like an old color Specialized used in the 80's on their Stumpjumper model. See all about it HERE.

A couple years ago, the BMC Monster Cross was offered in green and I actually asked to get one, but that somehow never worked out. I would really like to get one and set it up as a single speed. Maybe this run I will get that done. We will see.

Okay, that's it for this week. Happy Halloween and make sure you treat yourself and get in a nice bicycle ride!

Just so happens that I have myself an Amazon gift card waiting to be used on something worthwhile, and I've been eyeing this documentary for a while now! Thanks for the heads up!