Until Next Year Then 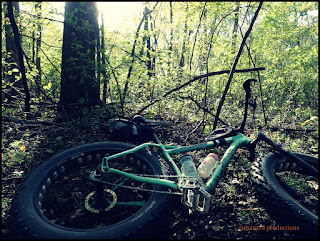 Well, as I look at the calendar, it is quite apparent that my plan to set the Blackborow up in its Summer mode is way past due. Mid-Fall is leading to Winter sooner than later, and it is about time to go through the Blackborow and return the rigid fork to it for the upcoming colder weather.

So, I wanted to give my long term impressions on the Bluto fork and maybe look at some ideas for the future here....

The Bluto fork is, in a word, genius. While it isn't the best performing fork that could have been made for a fat bike, it is a reliable, decent performing one that proves beyond a shadow of a doubt that fat bikes benefit from front suspension forks. At least using them in non-Winter conditions, I believe that is the case. However; and I can only speak for myself here, I wouldn't want a suspension fork and that extra weight on the bike for the sort of Winter riding I do.

The Bluto does do a great job of controlling that front wheel and enhancing the suspension effects that a big, fat 4.8" tire can have. It not only enhances that big tire's effects, it adds to that equation. If you have a fat bike that you can put a Bluto on, you should do it. It is definitely worth trying. It will allow you to go faster, it will allow you to gain even more comfort and control, and it will make your bike seem invincible. That last part may not be a good thing depending on who you are and where you ride!

Now, as I say, the Bluto is just the start, and we could have better stuff coming. I find it hard to believe that the Bluto will be the only game in town, but as of now- it is. Maybe we will have to wait a while, but it seems to me that another competitor to the Bluto would be something fat bikers would like to be able to have as a choice. Maybe a fat bike version of a Fox fork, as an example. Maybe a Manitou. That would be cool.

Other than more top-brand name choices, what could be better? Fore-aft stability for one. Those big tires have a big grip, and leverage the fork mightily. The damper could be better and tuned out of the box for cold weather use.

That said, we have it pretty good with the Bluto. It's pretty bomb-proof, and you can upgrade it. I may get around to doing that to mine over the Winter. That will be good to do, but first I need to get the rest of the Summer set up rounded up so when next Summer comes, the Bluto and the those parts should make for a fun mountain bike platform. Until then, I'm putting the original equipment fork back on, mounting the Anything HD cages back on it, and making sure I check every bolt before Ol' Man Winter decides to show up.

I was skeptical about the need for suspension on a fat-bike. At times I was even outspoken about the foolishness of the concept. Then I went to Pishgah. I found that while good old low air preasure could handle most of what was offered, when it got downright gnarly, my 4.8 Lou's gave under the pressure and I felt strkes on the rim. Higher air pressure and a suspension fork would have handled this nicely. I still feel it may be overkill for most of what the Mid-West has to offer, however, Bluto has its place.