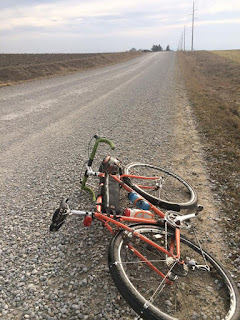 Ten years ago this week on the blog I ran a series on endurance racing, which was a big deal to me then because of my then co-worker, Jeff Kerkove and our involvement with the newly minted Trans Iowa, which, as I have said on numerous occasions, was patterned partially after 24 hour solo endurance mountain bike events. I called the series "The Future Of Endurance Racing", and at that time, I never dreamed that the format would be as small as it is today. That said, in the series, I and others explored what we thought of the 24 hour racing scene then which I find has a lot of parallels to the gravel racing scene of today. In particular, the marketing and potential profiteering from the genre. Check out the following, written this week ten years ago.....

Could it be that many of you are remembering what happened in XC racing? Perhaps many of you just cannot believe that something so cool could last without somebody screwing it all up? I don't know for sure what exactly prompts this sort of reaction. I can say this; if there is money to be made, then the focus will come off of the ride and the riders, and it will instead be on the product. In other words, marketers will get a hold of this sport, legitimize it in the minds of the elite by imposing a governing body on it, and then tweak it so as to attract as many folks as possible to spend their money on it.

At least some of you out there have also commented that the smaller, grassroots events.....are events that you expect will survive. Well, as a promoter myself, I can say that it won't last because of the money! Most of these events are fueled by pure passion for the experience. Once that burns itself out, and inevitably it will, either some other passionate folks must pick up the batons, or these events will fade into history. Perhaps they will be replaced by other, more exciting, challenging, and nutty events, I don't know! All I can say is that I don't mean to sound like an alarmist, just a realist.

So, the first quoted paragraph is what many fear what will, and maybe is happening, to gravel racing. Maybe we are half way there, with only the "governing body" part missing at this stage of the game. Well, there are rumblings that the USA Cycling organization is trying to reach out to gravel event promoters and trying to get their foot in the door to sell insurance to these promoters. USA Cycling has also been reported to have had a dramatic drop in income to the tune of one million dollars. It doesn't take too much to make the leap that USA Cycling sees gravel rides as a source of new income, or a recovery of lost income, depending upon your viewpoint.

The second quoted paragraph is something I have seen happen already with gravel events.  The races and rides come and go depending upon the endurance of those behind the scenes to put the rides and races on. The Almanzo 100 and its related events being maybe the most prominent of those and perhaps the only one to change leadership and retain its feel.......so far. Others have morphed from the grassroots, laid back atmosphere they began with to turn into massive, money making ventures that support livelihoods. While others have just grown beyond the capabilities of the founders to keep them free and have started morphing into more traditional looking events. The point is, just like I said ten years ago, passion takes you only so far, and many do not toe the line of their original visions for very long before they start seeing dollar signs. Maybe others find a way out of the event promoting/organizing game altogether.

Anyway, I found it interesting to see the similarities there.
Posted by Guitar Ted at 1:30 AM

I'm not a racer, never have been a racer, nor do I plan on becoming a racer now at nearly age 59 so take my comments in that light. I've been interested in gravel riding for the past few years and, because I live in a rural area, often ride on gravel roads. I enjoy the more relaxed solitude gravel roads offer. Following various gravel related forums and blogs, I can heartily agree with your assessment of the incursion of business into the gravel scene. From the competition side, it's almost a given. Racers who are, in any sense, competitive will tend towards making there equipment as competitive as possible to help give themselves that competitive edge. It happens in all forms of competition sports. This opens the field for manufacturers to come up with the "latest greatest" materials and technologies to help the competitor get that winning edge. It also allows that manufacturer/distributor to improve their bottom line. Year after year, the research and development released new products upon the consumer that are "better" than previous years. Ever heard of "planned obsolescence"? I feel this turns competition into a market driven culture that dilutes the competitive spirit. It irks me to see a corporate name applied to any sporting event. Personally, I've always been attracted to the grass roots nature of gravel cycling and competition. I enjoy seeing when someone converts an old bike into a "gravel mutt". Yes, that gravel mutt might not be as "competitive" as a modern dedicated gravel bike, but that mutt is, in my opinion, in keeping with the grass roots vibe of gravel riding. Maybe an event just dedicated to riding gravel mutt bicycles would be in order.